Been a while since my last PCB flood, so here it is.  Actually my wanted list is shrinking by the month now, I think it might be time to thin the herd a bit, this got out of control.  So here we go…

X-Files – this is the Korean version, with tame pictures.  Actually something is lost because the purpose of multiple rounds in the normal version is a stage by stage strip, and the pictures are totally random now. 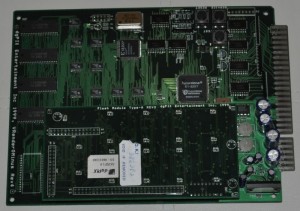 Shadow Dancer – and so my on-off relationship with this game continues.  This is the third, maybe fourth time I’ve owned the game.  I couldn’t tell you why I keep selling and buying it again. 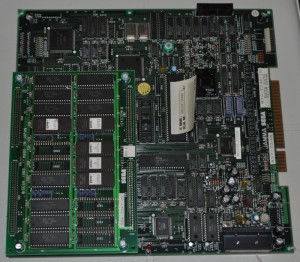 Vivid Dolls – the Seta Aleck64 system, it’s essentially a N64, the game is yet another Gals Panic clone, not a bad one but not the best either.  Actually the cartridge slot is damaged, I’m not looking forward to replacing it, 160 pins. 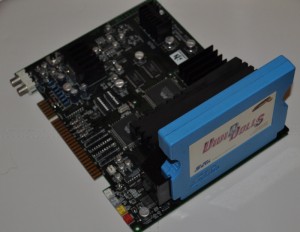 Pound For Pound – Irem boxing game, uses trackballs.  Bought this by accident, I actually thought it was a different board family and as such I’ll probably be reselling it at cost.  It was incredibly cheap though, maybe I should just hoard it for parts. 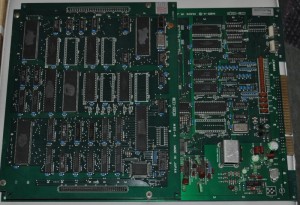 Go-Stop – Korean version of Hanashibari, I bought it just to dump for MAME.  It’s some kind of Mahjong type thing and totally incomprehensible. 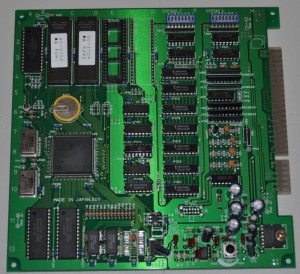 Magical Error wo Sagase – Bought this because it was amazingly cheap in case my Hyper Duel ever breaks, 95% identical parts.  It’s a spot the difference type game, doesn’t seem too bad. 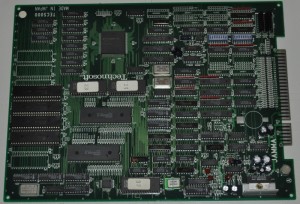 Marvel Super Heroes – Hispanic version, I just wanted an orange CPS2 game.  Two amazing things – firstly it was shipped with the Ebay Global Shipping Programme.  Avoid this method of shipping at all costs, explain to sellers why you aren’t buying from them.  I’m 3/4 times now for receiving damaged goods due to the variety of cheap couriers ‘Pitney Bowes’ use, who Ebay farm this out to.  How the fuck do you smash an A board case anyway?  Well – they managed it.  Second amazing thing, it was on the original battery which I’ve now swapped. 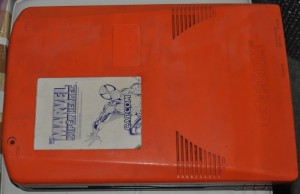 Gals Pinball – Finally found it!  I’d like a replacement since someone had repaired it with the wrong RAM and while removing it to put the right speed in, a few of the heavily damaged solder pads gave up.  It’s a pinball game where your score determines which girl picture you see at the end.  Strangely the more attractive ones aren’t always at the top of the list.  I suppose it’s personal taste.  It’s not too bad to be honest but Super Pinball Action is better. 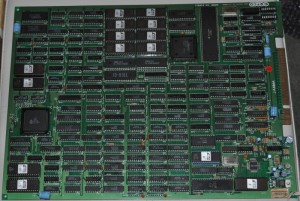 Gals Hustler – Yet another pool/stripping game – not a brilliant one, it was cheap and I picked it up for completion.  Real Break is still BY FAR the most fun game of this type, none of the others really come close. 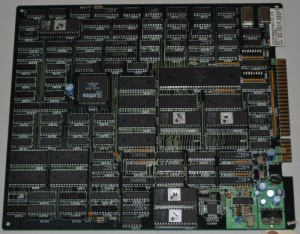 Dr Tomy – it’s sort of like Dr Mario, but with girls (hey, it’s Playmark after all…)  Not that great, just very rare. 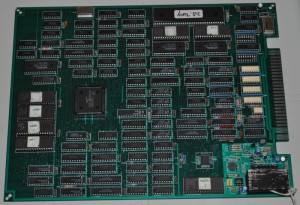 Blazer – been considering one of these for a long time.  Bought it.  Found the actual PCB wasn’t in as good condition as it looked, swapped the ROMs onto a cleaner System 1 board – good times.  It’s an odd isometric tank shooter, not entirely successful and never made it out of Japan. 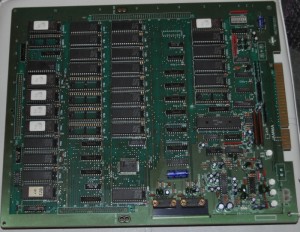 B-Wings – I got this from Bill Burger on Ebay.  It’s always a lottery with him and this was no exception.  It did work, but it was in horrendous condition.  The below picture is after repairing 1 ribbon cable, 6 spacers, 8 sockets, 1 CPU and a ROM.  There are still a few sockets and chips I want to replace with uncorroded ones.  You can see from some of the unpopulated sockets how damp the top layer got.  Luckily I already had an adapter to test this, it’s the same monster triple decker as Zaviga.  Larger overall than M72 boards, serious business. 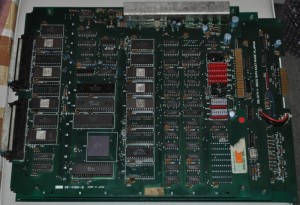 Big Twin – another Playmark puzzle game, when I bought it I didn’t know there was a ‘clean’ version, disappointing. 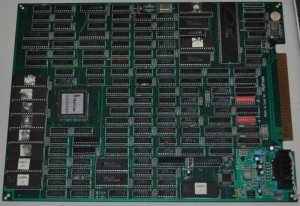 9-Ball Shootout – this one doesn’t seem to match the ones in MAME, I’ll dump it over the weekend.  It’s an odd video pool game in that the table is actually very primitive polygons.  Physics are decent aside from an amazing bug that lets you shoot the ball with so much spin it actually just curves in a tight circle. 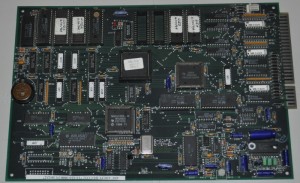 9-Ball Shootout Championship – being doomed to paying a lot of shipping already, since this was from the same seller I tagged it on.  Slightly updated version which allows you to do jump trick shots too. 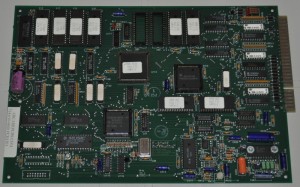