I really should do a few posts showing some of the art I recently picked up.  Instead, here are more PCBs.

64th Street – already have a Japanese one of these, this is a World version.  Not sure if it was ROM swapped in Europe or at the factory – my guess would be it was originally Japanese and region swapped though since Jaleco usually did have very obvious ‘export’ labelled chips.  Had to fix a damaged track where something has scraped it in the past, all good other than that.  I bought this purely because the PROM needed dumping for MAME and I didn’t want to desolder the one in my keeper board.  This one will be sold now.  Pretty cool game actually but I don’t have space for duplicates these days. 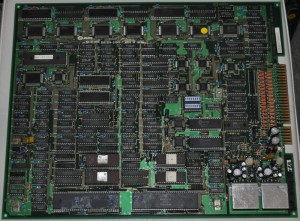 Mr. Heli – this was a Japanese ROM set I’ve had spare for quite a while now, I bought it because I needed the art, it cost almost as much as a whole board to get hold of….  I saw another M72 game (Hero Tonma) come up for a decent shipped price and now the much rarer Heli set has a new home and will be up for sale soon.  Interestingly the board set had an X-Multiply seal on it, which was worn through and had been glued down.  ROMkit swapping was very common on M72, finding ‘factory’ games which have never been swapped around is ..challenging now. 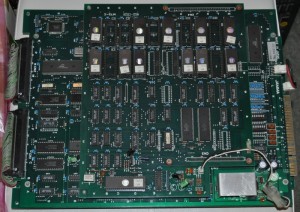 Mile Smile – whole kit!  Manual might be a copy, I can’t really tell and have no reference to compare it with.  I couldn’t resist the cool box and it’s a super cheap game.  My spare will be up for sale shortly. 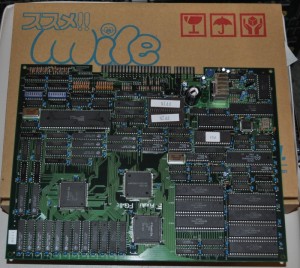 Galmedes – arrived with a sound fault.  Seems to work fine now, I replaced a few obviously damaged capacitors.  It’s a fairly average shooter from Visco, but I like Visco games. 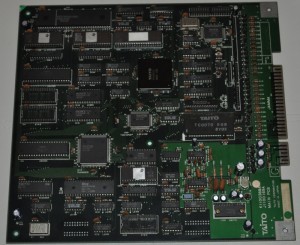 Kuhga: Operation Vapor Trail – finally got hold of a Japanese one.  I’ve wanted one for ages to go with the amazing art set I picked up (complete with a big topper style POP).  My last World version (I had three…) is up for sale now. 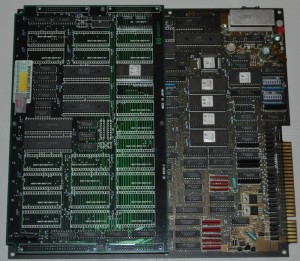 Brick Zone – really happy to have this one!  A very nice forum user knew I was into Korean games and contacted me directly when he picked this up with a bunch of other stuff.  Traded it for something on my sale list.  It’s a really good Arkanoid style game with lots of classic and contemporary artwork as backgrounds.  It turned out to be an undumped newer revision than the ones in MAME, and as a result of doing some clock measurements and a video the version in MAME will have correct audio soon – currently plays the wrong sounds at the wrong times at the wrong speed.  There’s probably a battery in that security block, I wonder how long it has left.  This is a new security block type too which also scrambles the sound a bit, it’s smaller than the previous type used on Star Fighter. 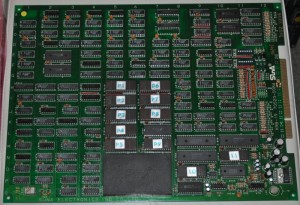 Frogger (Videotron) – another one I bought purely to dump which is now for sale.  Interestingly this is some form of early cart based system from Spain.  The game and graphics (while recoloured) are the same but the audio is very simplistic. 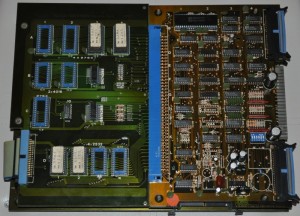 Bay Route – solid run’n gun from Sega, the mainboard is actually from a Monster Lair at some point in the past, and someone has already changed the battery although there’s no clue as to when they did it.  They’ve put it back together with some kind of adhesive paste.  What….? 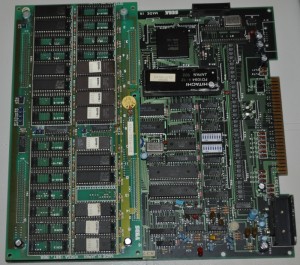 Aero Fighters – this was a gift for my work dumping and submitting things to MAME, when I explained to the seller of 64th Street what I was actually buying it for.  Turns out he’s a fan of emulation.  I’m a fan of shmups, works for me 🙂  Great music, sounded better when I replaced the cap which was spilling its guts.  Pity about the slowdown. 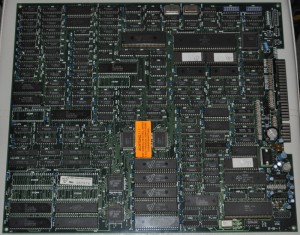 Area 88 – Another one I’d wanted for a while – this was advertised as a UN Squadron, but the ROM layout was clearly Japanese.  When I looked more closely the labels were also Japanese but the four associated with code region had obviously been peeled at some point.  There was a german op sticker on it, so they’d imported this from Japan and region swapped it.  Amazed they didn’t trash the labels.  I’ve restored the correct code now and the labels survived quite well. 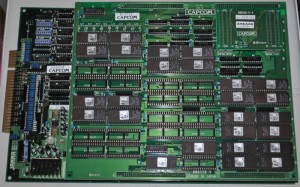