Managed to get hold of two surprising things this past week or so!

Spider – strange little game by Buena Vision, it’s another Qix clone, this time without girls and instead having a strange and occasionally colour cycled poorly digitised rally car as the background.  I don’t know if that’s a fault as it’s not emulated yet although the dumps have been submitted.  Interestingly in this one you have a maximum line length which you need to extend via powerups.  Music sounds a little ‘off’ on the bass, the AY is possibly faulty – that’s pretty much exactly what they do when they go bad. 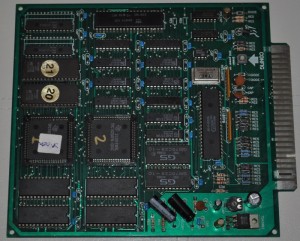 Sexy Casino – you can pretty much sell me anything by putting half dressed women in it.  It’s true.  Will be dumping this for MAME and then probably sticking on my for sale list forever, it’s a video pachinko game but you can’t really play it like a videogame the same way you can with Pachinko Sexy Reaction for example.  Also unplayable without a pachinko control dial.  Not quite sure why, but this has Dynax, Nakanihon and FACE logos all over it.

Nostradamus – bought for the artwork (two instruction cards and the manual), a few days later the seller contacted saying he’d found the box too.  Now I’ve ended up with a full kit with matching serials!  PCB is slightly tidier than my old one too despite a capacitor which had erupted through the metal lid, thankfully dried up there instead of causing damage. 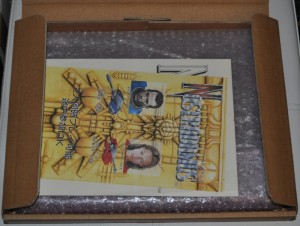 Real Break – yeah, yet another one of these, it’s up for sale immediately including nearly a full set of artwork – I bought it just for the POP which I’m missing from my kit.  Seriously this is a very good video pool game. 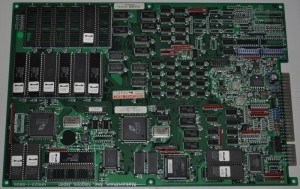 Gonta Ganbare – followup to the original Gonta (aka Lady Killer), dive through tiles to uncover pictures of hand drawn women, if I’m honest I think the first game plays better and looks nicer.  Heatsink is non standard, hand made – not sure why someone did that but hey whatever, it’s not hurting anything. 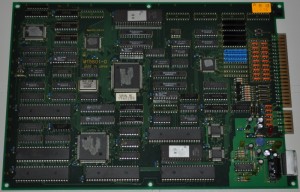 Maju No Okoku – or as we know it in English speaking lands, Dark Adventure / Devil World.  The Japanese version is seriously hard to find and this cost quite a bit even without being fully tested (only sound confirmed).  Thankfully it does work fine although I found a damaged cap which was right on the edge of leaking – it leaked like a river as soon as the soldering iron warmed it up, had the board upside down at the time thankfully.  Half the board spacers were missing too but now it’s bolted together like a tank with some spare metal Irem ones I had.  Fun note – the JP and World versions are significantly different to the US.  US starts the player with melee weapons, drops the Gradius style weapon select system, allows 3 players, has twice as many stages repeating a boss several times and makes life counters tick down faster.  In short, in the US Konami made it a credit feeder just like they did with Crime Fighters.  I’d been looking for this one for a while, happy to have found it. 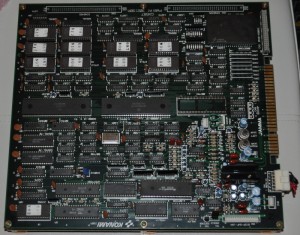