This is the game I’m playing through again right at the moment.  It tells the story of a memory hunter, Nilin, who goes up against a corporation seeking to gain power through the control of peoples memories.

I fell in love with this within the first 10 minutes of play – the actual gameplay is pretty much standard third person action platforming fare, with Batman-style group melee fighting and some boss fights, a couple of which are truly superb.  There are also some interesting memory remix sequences in which you can change the victims memory by rewinding and altering small details until you get the desired end result. 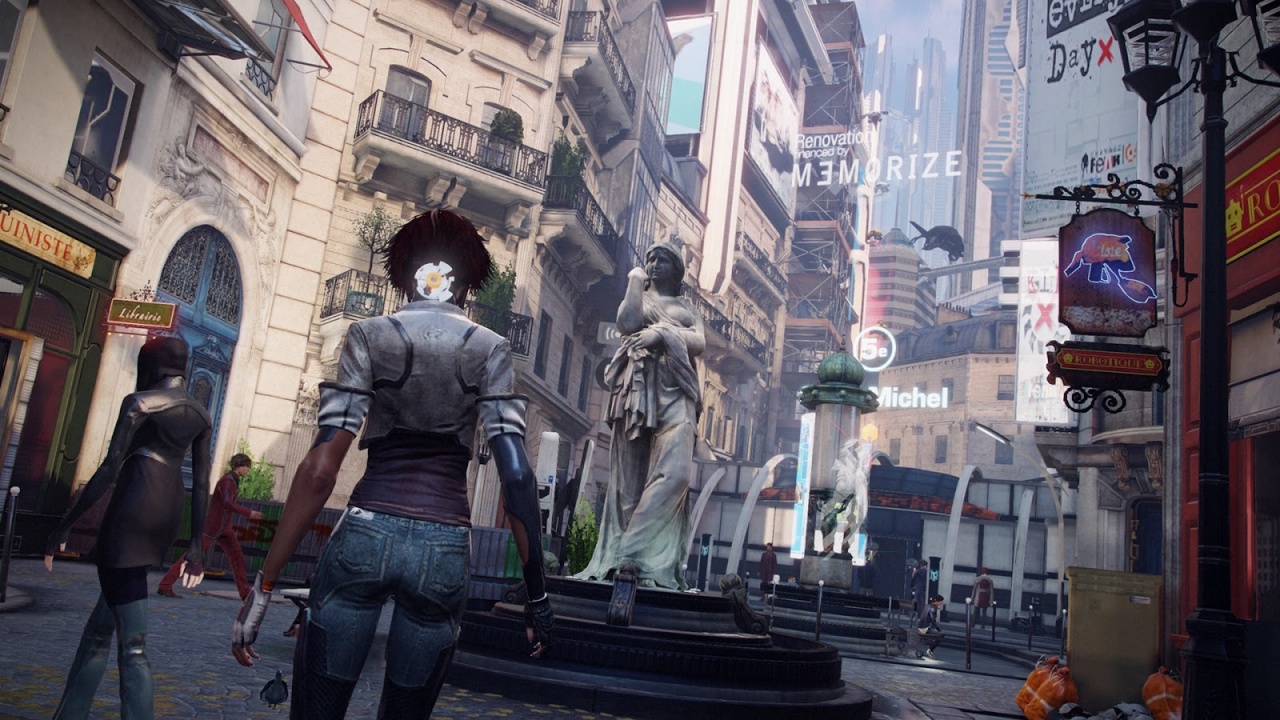 What really sold it to me was the overall package though.  For starters the setting is brilliant, a futuristic industrial sprawl which has engulfed Paris, leaving it a mixture of affluent new constructions and old undeveloped areas, many of which have been totally overcome with long forgotten technological refuse.  We’ve all seen this concept before in games and obviously films, but this game has what I’d consider to be the finest example, it really does sell the illusion and the only shame is you don’t get to see as much of old Paris as I’d like.  To help this become reality, the developers had some excellent artists available, in fact the hardback artbook is well worth flicking through – in game there’s no area which has been ignored, I particularly liked all the graffiti in the slum areas, discarded robots in piles of refuse, and the way your Sensen implant causes the game world to have a minimal HUD over it.  The soundtrack is top class too, it suits the mood perfectly and ramps up during successful repeated combos while fighting.

The story and characters are also very strong, especially the lead which I think was one of the main kickstarting forces behind the recent heavy handed push from journalists to smugly go on, and on about sexism in games.  The story goes that it was hard to find a publisher because the lead character was female.  Not sure I really buy that at the end of the day, it never seemed to slow Lara down much.  Nilin is a great character, I’m happy they didn’t change her.  The supporting cast aren’t bad either, and something you have to do to one of them near the beginning of the game never sat right with me and caused a few guilt pangs every time I saw her again.

A lot of the games I enjoyed most had the ability to sell me a place.  Bioshock has the best location perhaps ever seen in a video game.  It’s set in Rapture, an art deco city built under the sea by Andrew Ryan designed to provide the libertarian elite with a home free of censorship, socialism and religion.

The decision to pick a city built in the 1940s and go with the art deco look was inspired, Rapture is a wonderful creation – of course liberties have been taken with the technology, but you won’t see advanced electronics, it’s all steam valves and gears.  The various areas of the city all look very different but part of a whole, much of it is now run down and leaking and you really get a sense of how greatness has fallen.  As an aside I was happy to find that the Bioshock Infinite DLC is set during the heyday of Rapture, I’m looking forward to making a return.  It sounds good too, with crackly phonograph sounds and period music.  You have no idea how many times I just stopped in this game to look and listen. 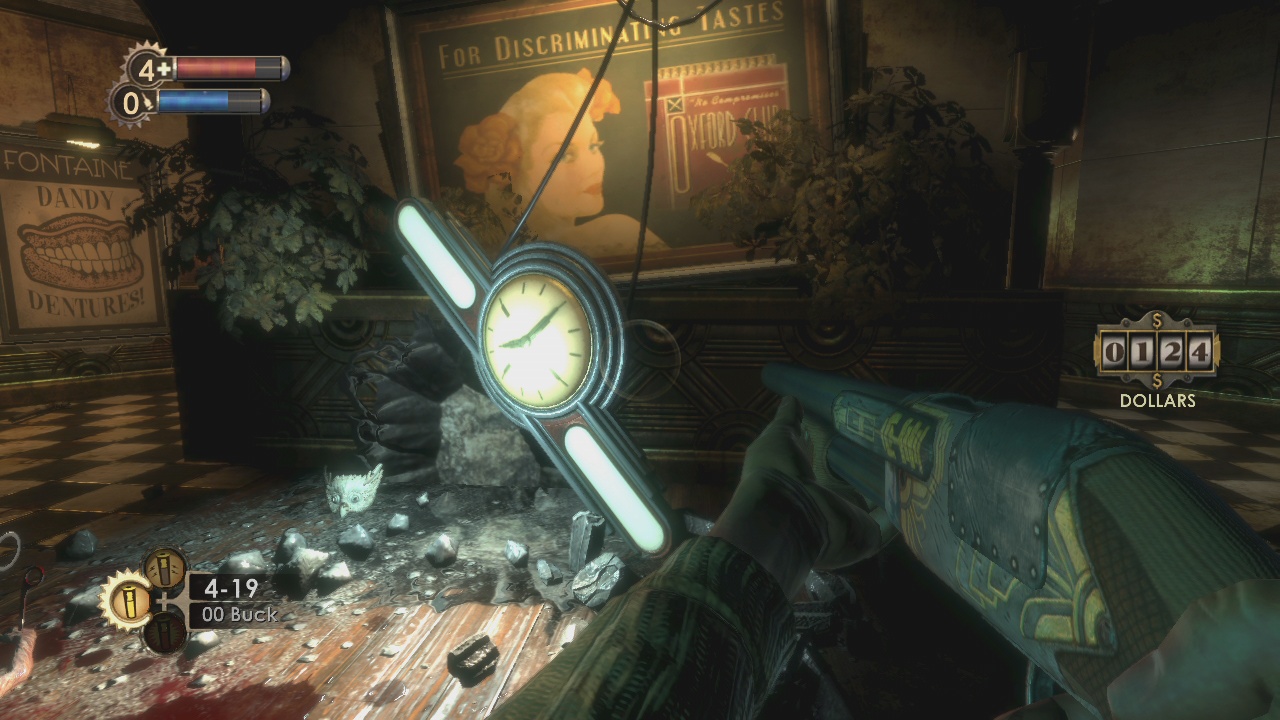 As for the gameplay it’s a solid FPS, nothing to complain about and some of the fights are pretty intense.  You get a lot of variety with the different guns and plasmids too.  Plasmids are essentially genetic modifications (one of the things that caused the downfall of Rapture in the first place), they’re all fairly useful but I found a couple of favourites and stuck to them – the bee swarm seemed particularly useful as a way to weaken enemies before attacking them properly.

The story is another strong point, I have some sympathies with Ryan’s politics which helped.  You learn quite a bit about the fall of the city along the way, and near the end there’s a sucker punch the likes of which I’ve never seen in a game, it was very powerful and I’ll say no more in case there are people reading who don’t already know what it is.  That was a writing master stroke, well done Ken Lavine.  The sequels ultimately failed to live up to the quality of this game.  They’re both very good but lack the magic, although Elisabeth in Bioshock Infinite is probably one of the best in-game companions of all time.

Vanillaware strike again with some of the most jaw droppingly pretty graphics you’ve ever seen.

Let’s get that out of the way – this is the best looking 2D game ever made in my opinion.  No, it’s not pure pixel art and I get that, but the fact remains – just .. look at it.  It also runs mostly at 60fps but with multi player it can start to chug in some areas.  The audio is also great aside from the slightly wooden sounding narrator – he reminds me of narrators from old BBC TV childrens programmes in the 80s.  You can download others as DLC but ultimately they aren’t much better and I stuck with the default. 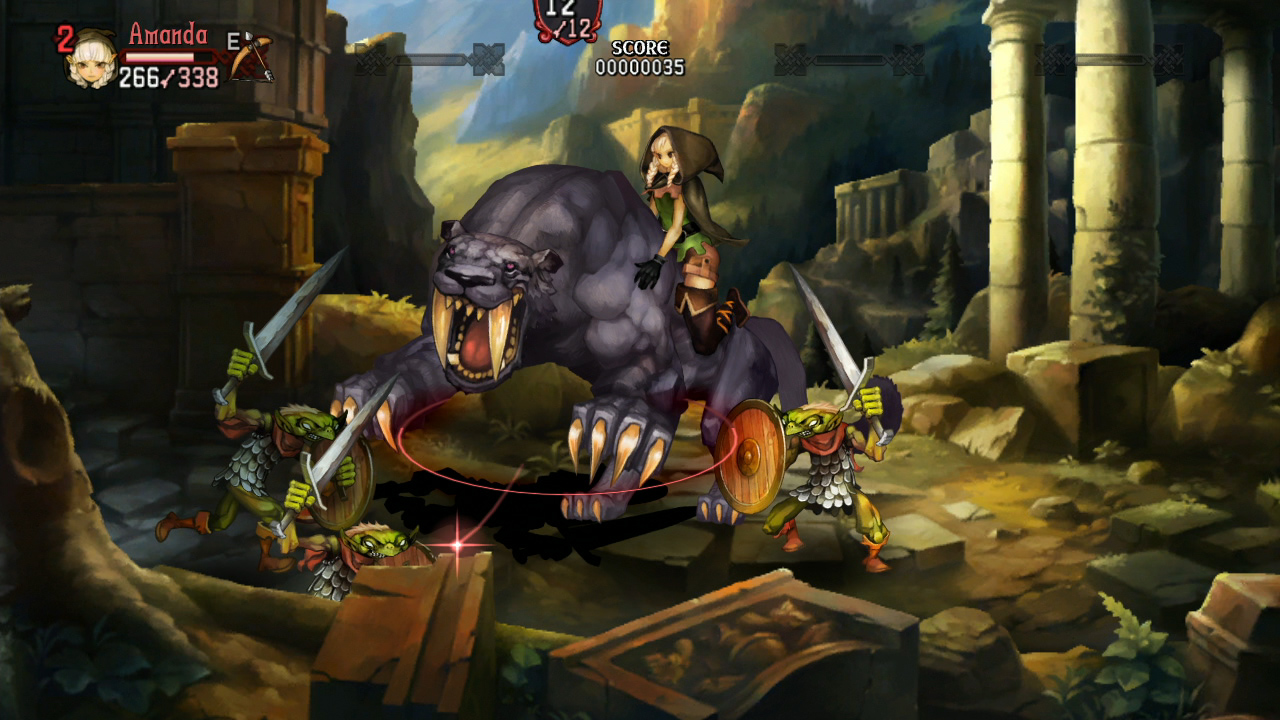 The gameplay is excellent – it’s a nice old fashioned scrolling beatemup, with RPG elements allowing you to level up and distribute points amongst various skills.  It’s worth mentioning that if you spread them out too evenly you will most certainly be a jack of all trades and a master of none, and really suffer against harder bosses.  After each mission you’ll end up with piles of new equipment too, and it can be worth just running dungeons repeatedly to see what appears.  There is one flaw though – since you can resurrect the bones of fallen adventurers and invite them on future missions, when you’ve got 3 AI players and one of them has also resurrected a skeleton, the action can get very messy visually and actually you can just stand in a corner and watch them slaughter everything for the most part.  I recommend just taking one helper along and turning the free join option off.  There are six characters to choose from, I went with the elf archer for her ranged attacks, although the sorceress has become a fan favourite for obvious and pendulous reasons.

It’s well sized too, with 9 stages, each of which has two possible routes and bosses – you’ll have to face all of them to reach the dragon at the end,  something that took me 22 hours of play – but that’s with all the side quests.  I’m happy they put this out as a retail release, too often these days arcade gameplay means going digital only, and that sucks.

I wonder how many people even remember this one coming out?  You want an absolutely outrageous ninja action game?  Well here it is.

You play a ninja tasked with dealing with an outbreak of a mutating virus – but you can throw the plot in the bin and ignore it, because all that matters is the hack and slash action with huge boss set pieces.  There are some great FMV sections linking the gameplay segments together, for example riding a motorbike up an in-flight missile which is apparently a normal day for ninjas.  You’ll slide down a skyscraper digging your sword into the metal and glass to slow down, fight enemies while running vertically downward, swing around a building on a grapping wire and kick a giant spider in the face – all within the space of about 20 seconds.  This is ‘ninjas can do anything’ taken to the ultimate degree. 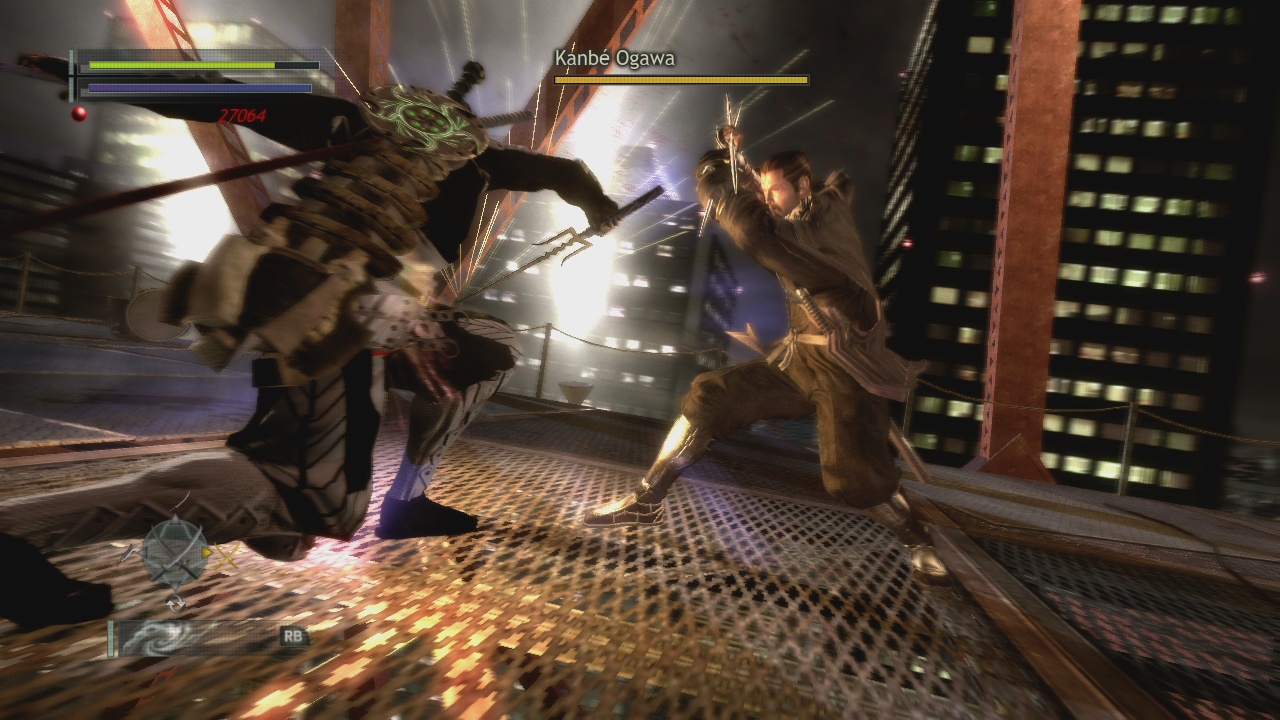 The gameplay is very solid, somewhat like God of War or Ninja Gaiden but with a faster pace generally.  There are QTEs throughout the game, a lot of people hate them but honestly I’ve never had a problem with them being used in the right places.  This game uses them during some of the cut scenes, and particularly as boss finishers, and they work well here.  The one downside to the game is really this should have been a 60fps title, but it isn’t.

If you’ve ever liked action games, you should track this one down and give it a go.  It was very quietly released, barely reviewed and then forgotten back in 2009, the fate of so many post-Christmas releases.

Back when this was first announced, I’d never seen anything like it.  It’s an adult drama / morality tale and puzzle platformer all in one.

You play a guy called Vincent, he’s somewhat happily involved with his girlfriend Katherine, but she’s making it very clear that it’s time to get serious and it’s obvious Vincent isn’t entirely comfortable with the idea.  Then one evening at the bar he frequents, he meets temptress by the name of Catherine. 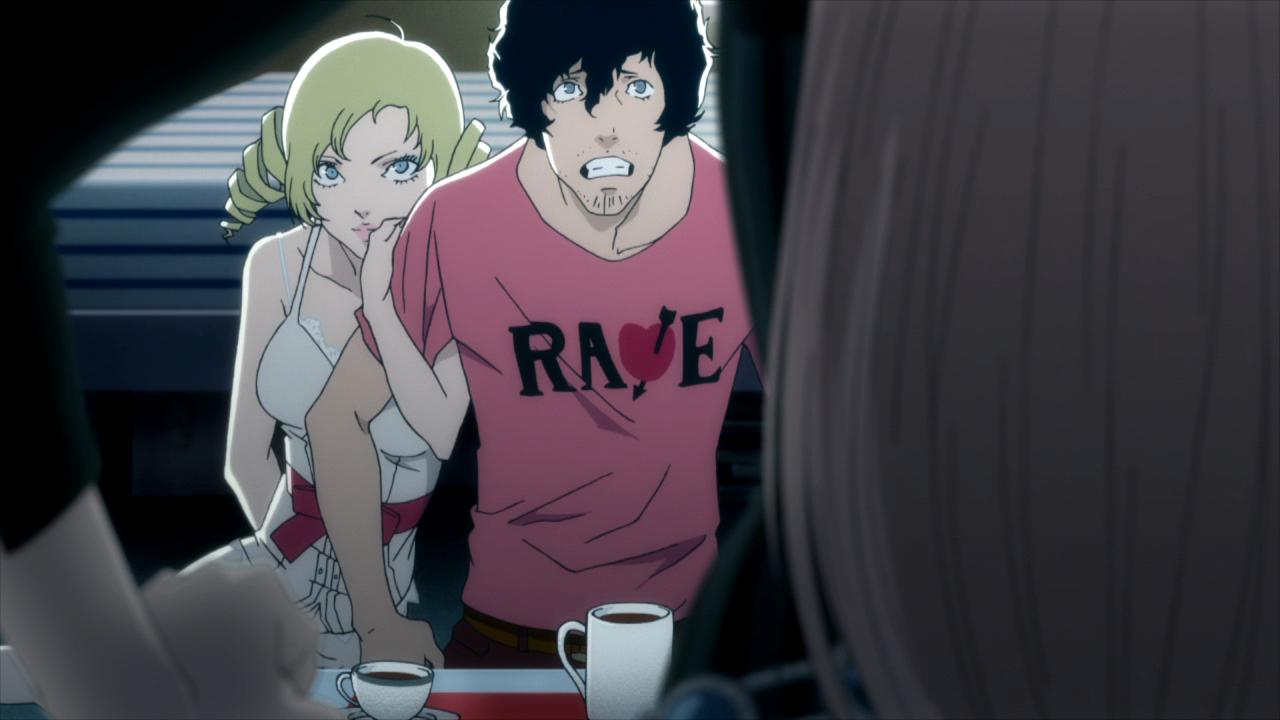 The game alternates between narrative story sections mostly set in the bar, where you can talk to other patrons and your friends, and puzzle sections which form Vincents increasingly intense nightmares.  The bar sections are very well scripted, they do a good job of selling Vincent as a character and his predicament.  The puzzle sections are based around navigating your way up a series of increasingly difficult block climbs.  They can get quite frustrating near the end so be prepared for a challenge.

The game has multiple endings depending on choices Vincent makes during the day and during his nightmares, and the end results can be fairly dramatic.  Will you seek to repair your relationship with Katherine or wander into the arms of the other Catherine, and how will that turn out anyway?  Doing the ‘right’ thing is made difficult – I mean to play through on easy again a few times to see some more endings, although I was fairly happy with the one I got first time around.

A very unusual game, it’s definitely worth checking out for the art direction and writing – before it was announced that a European 360 release would actually happen, I just gave in and bought a PS3 just for this game so that I could import the US release.