Sega have a pretty patchy track record these days as a developer, but sometimes they get it right, and … the whole world ignores them.

Binary Domain is such a game, it’s a third person shooter set in the not too distant future, where robots have become commonplace, and so advanced that laws exist to prohibit ones which pass as human.  You play the leader of a squad sent in to apprehend a Japanese scientist believed to have created a robot that actually believed it was human. 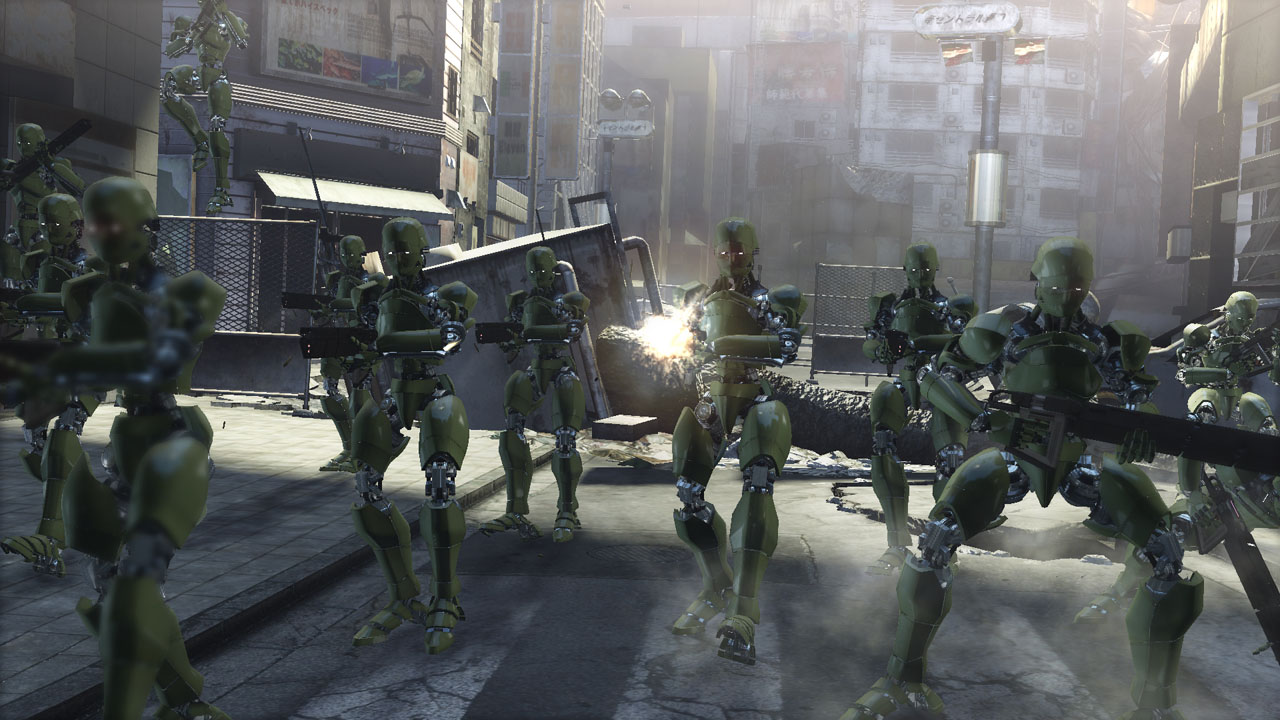 Something new this game brought to the table was some fairly advanced AI, seems strangely fitting really.  The vast majority of enemies are humanoid robots, their behaviour adapts to your attacks, how and where they are damaged, the status of their fellow units and so on.  You can issue commands to the current team mates you have in tow, and they’ll follow orders better if you have a good relationship built up with them.  The enemy robots really are the star of the show though, you can target limbs and blow their legs off for example, and they’ll just start crawling towards you.  The way the enemies will keep trying to manoeuvre around you, fill gaps in their formation and so on makes the game a bit more involved than average action titles.

The other great thing about the game is the story – a lot of thought has gone into it and the characters really start to come alive as you play through the game.  Especially fun is Cain, an advanced French robot built for combat.  I won’t say much more here because it would spoil the experience.

All this would be wasted if the game ran like a dog, but actually – it looks really good and it sticks to the 30fps frame rate well enough.  The soundtrack is dynamic and sets the mood throughout the game, and the voice acting is very good when taken on average – again with Cain taking the spotlight.

The Last Of Us

A virus has turned most of the population into zombies, with a few well defended outposts being the last places people can live somewhat normal lives.  A man and a girl essentially go on a long and zombie infested road trip, eventually developing a father and daughter bond along the way.  There were a thousand ways they could have messed the story up, but they got it just right, the two main characters are believable and very well scripted and acted, and their relationship develops in a way that feels completely natural. 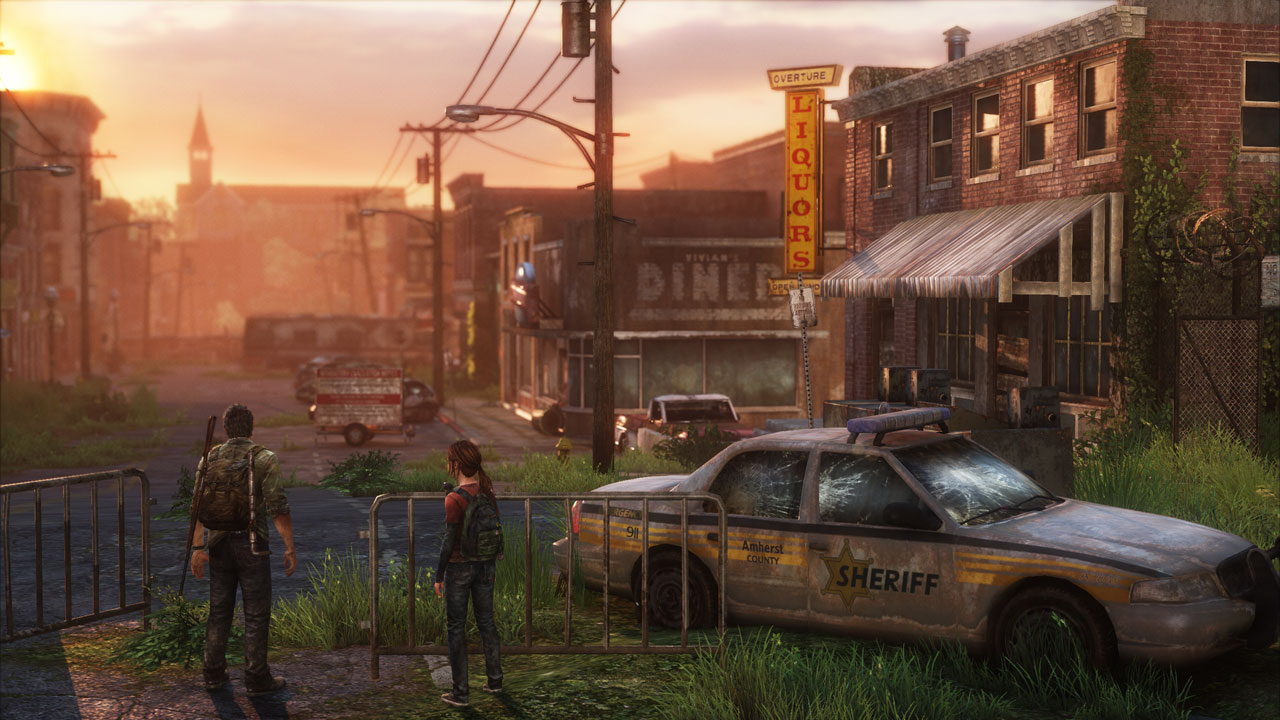 At the same time, this is probably one of the most technically accomplished games of the generation too – nature has started to reclaim the world humans built, and it looks at once beautiful and desolate as a result.  The frame rate holds up well despite the game world dripping with detail and drawing as far as the eye can see.  They also resisted the urge to make everything brown and grey, while the world is in ruins it’s still vibrant and colourful in the right places which makes a nice change.

The only downside in the whole game in my opinion, are some  frustrating times with the zombies that can hear but not see you – in any straight up fight with them you’re going to get overwhelmed, and it can be hard to stealthily isolate and take them out in some areas.  There’s a multi-player element, but I didn’t investigate that, it felt very much like a game that doesn’t need multiplayer at all, it’s a living story.

Early on in the life of the 360, it seemed like everything was going to go well for Microsoft in terms of a rich software library, and that included catering for the Japanese market.  JRPGs are obviously a huge market across the world so Microsoft needed a big hitting title to show they could compete with Sonys software library courtesy of Square/Enix.

They came up with Lost Odyssey, from the original designer of the Final Fantasy series.  It was far from a simple Final Fantasy clone though, being aimed at a slightly older audience and as such bringing more depth to their characters than is normally seen in JRPGs.  I especially liked the relationship between Jansen and Queen Ming, which was really well handled as opposed to the superficial romance common to Final Fantasy games.  The plot was somewhat more mature and complex too, focusing on a mixture of politics and fantasy.  By virtue of the story, it had to investigate what it might mean to be immortal in a world full of people who live and die around you. 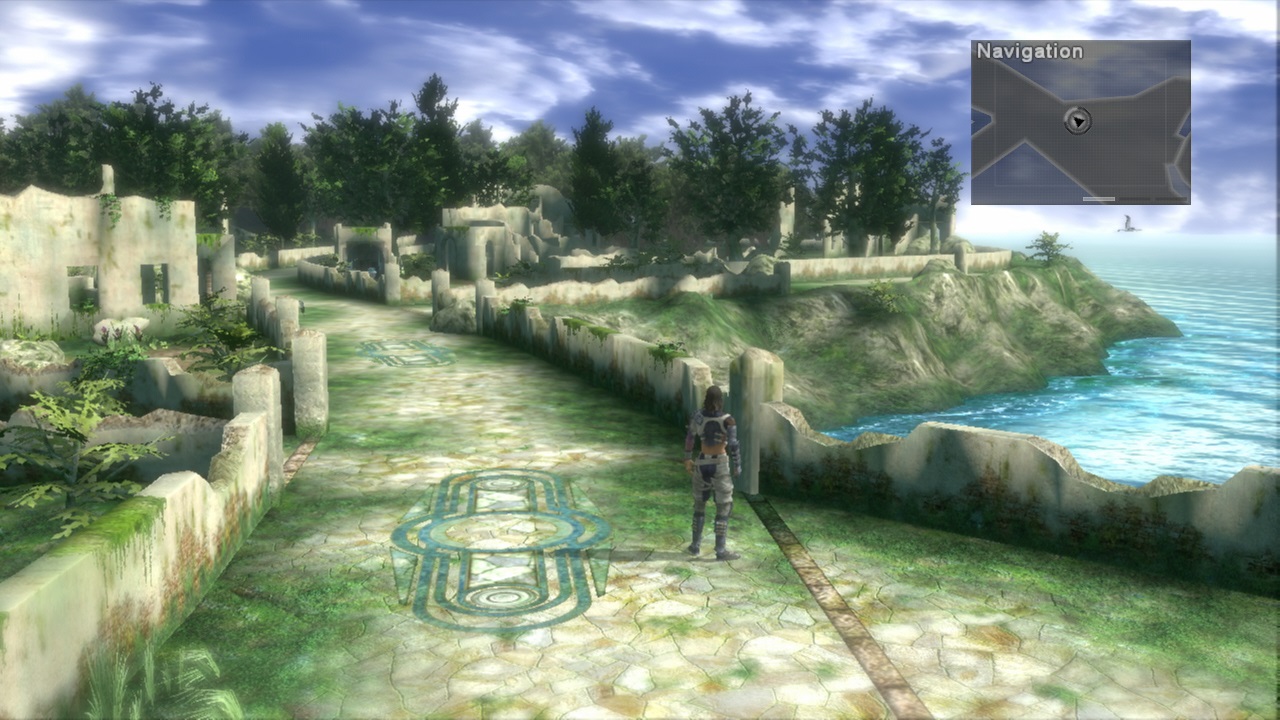 As for the gameplay it was all very traditional, featuring turn based battles which used a variety of skills and magic.   The party followed a front line / support model, and if you didn’t get this right, later battles became particularly difficult.  The immortals actually had to be paired with mortals to develop their skills, which kept the party in a decent amount of rotation, and finding the right support/attack balance was an art in itself.

It looked gorgeous too, easily as good as anything Square/Enix have come up with, with correspondingly good situational music – one highlight being the presentation of memories which were slowly unlocked as the story progressed.  The level of production quality and detail saw the game ship on 4 discs since the 360 was tied to DVD media.  If you like the genre and haven’t played this one yet, it’s worth owning a second hand system for.

Bayonetta follows the story of the last Umbra Witch, and the balance between the light and the dark.  I’m actually not going to attempt to cover any more of the plot than that – it’s nearly incomprehensible.  It boils down to visiting a number of stages inspired by various aspects of religion or mythology, and fighting angels.  Yes – angels.  In Bayonetta these are actually monsters and bosses, and they’re not playing nice.

At its heart, it’s a flashy and chaotic 3rd person action game – Bayonetta has a huge range of attacks including being able to shoot with handguns, or guns in her shoes.  The combat is heavily combo based, but you can also hold buttons to exit a combo and come out shooting with any limb.  You can spin the stick and go into a frenzy of bullets, transform into a panther to run rings around the enemies, and use finishers known as ‘Torture Attacks’ – basically setpiece kills like an iron maiden or a guillotine, and those are the tame ones.  During longer combos her hair becomes part of the attack forming giant fists for example, and since it’s used for her outfit, she ends up showing quite a bit of skin when you play well.  Well timed dodges will put Bayonetta into Witch Time – a burst of slow motion in which the enemies are defenseless and it’s essential to learn this skill. 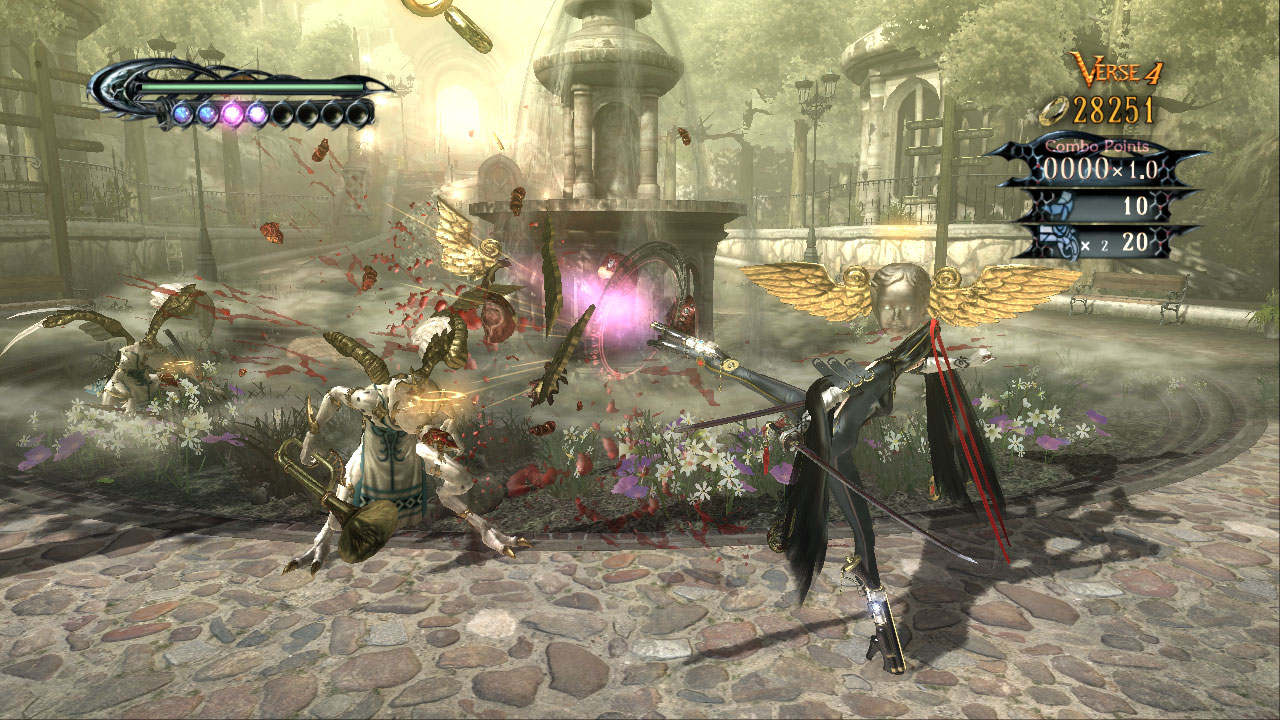 In an attempt to build replay value into the title, when you complete the game at a certain difficulty level, further ones are unlocked.  Each stage you play is graded at the end with medals, getting killed will count heavily against you.  I found that even Normal mode was a significant challenge, and I can’t even get out of the intro graveyard level on Hard.  This game is about as hardcore as it gets.

The presentation is also peerless.  The soundtrack is epic, the angels range from foot soldiers to giant leviathans, the overall look of the chaos you end up creating is dizzying to watch even as an observer.  Bayonetta herself looks amazing in motion, the environments are mostly well designed with some really stand out areas from time to time, and the whole thing (on the 360 at least, the PS3 was less fortunate) zips along at 60fps.  The soundtrack deserves a special mention too, being a mixture of jazz, funk, pop and choral music – I’ve never heard anything quite like it, but it just works for this game, I can’t imagine playing through without it.  They also found the sex appeal dial and turned it to 11, it’s dripping with fan service.

Possible one of the best action titles of all time, and some people say this generation has been bad for games..  Whatever…

The history of horror games is long and fairly haphazard.  I think the earliest I can remember is Chiller from the arcades, which caused quite a bit of drama despite being vaguely comical now.  There have been a lot of games that relied on blood, a lot that rely on making people jump, obviously there have been more accomplished efforts like the Silent Hill or Resident Evil series, although the latter series gets a lot more credit that it deserves.

Condemned was actually a launch title for the 360, it tells the story of an investigator by the name of Ethan Thomas who has been framed for the murder of several police by Serial Killer X.  He sets out to track SKX down and clear his name, with a little radio help from Rosa back at forensics headquarters.  Much like films, horror games generally aren’t very scary.

Condemned had several moments that honestly scared the hell out of me. 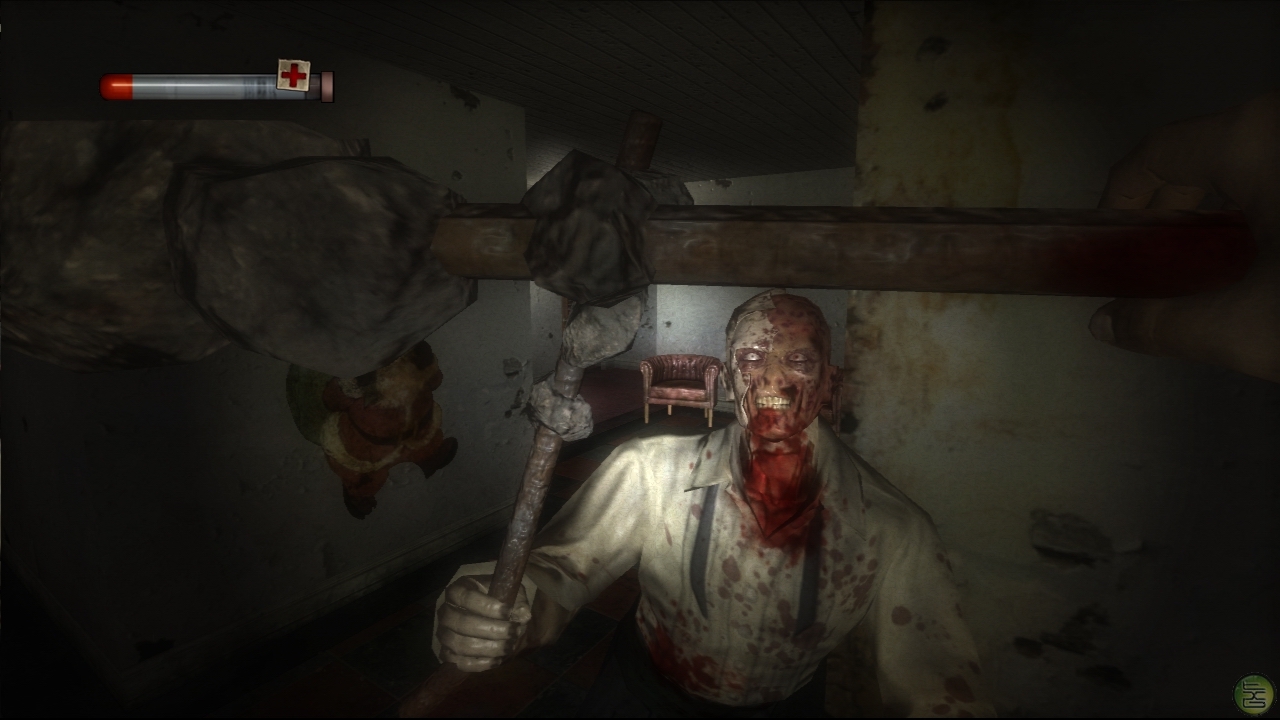 How was this possible?  My horror film exposure reads like a shopping list, I can think of only a couple of films that had me on edge as much as Condemned did.  Firstly, the locations – derelict, forgotten areas of the city.  They’re all dark, shadows everywhere, and as the game progresses it seems like Ethan has started to lose his mind.  As you play through the game it just gets creepier and creepier – the department store was particularly unsettling and honestly I just wanted to get the hell out of there.  The game achieves this through a measured application of danger and scares – many of the seemingly empty rooms really are empty, enemies stay out of sight as much as possible and to begin with, you’re dealing with what appear to be drug addicts and other crazies.  Combat is made very personal since melee is what you’ll mostly be going with, and the game is all in first person.  When enemies attack, they come from the shadows and really get in your face – being attacked by a homeless psychopath in a disused library is a lot more frightening than a monster in a graveyard.

Ultimately the story unravels a little at the end, but by that point you’ll either have switched it off, or been sold on the experience entirely.  The final level sees you fighting off monsters in a dilapidated farm house with no torch and light only provided by burning planks – at that point it’s edgy because you really are fighting monsters and you have little to defend yourself.  This final section just wouldn’t have worked without the slow escalation the rest of the game puts you through.

There was a sequel, it refined the combat a lot but it just wasn’t frightening – firstly it went more down the Silent Hill route of weird ‘stuff’ being everywhere, and secondly there really was something hiding around every corner.  That predictable overload waters down the experience.