It occurs to me at this point that tagging my arrivals posts just with DD/MM and not including the year, is eventually going to cause a mess.  I need to sort that out.  I need to do a lot of things, generally.  Here are some more games instead.

Vigilante – the collector in me wanted a Japanese one.  At this moment in time I have far too many Vigilante PCBs and I can’t find any differences, except that the Japanese one has a slightly different bit of art on the license seal.  This is of course an in spirit sequel to Kung-Fu Master, and gets kind of overlooked these days.  It’s a solid game, great art style and music too. 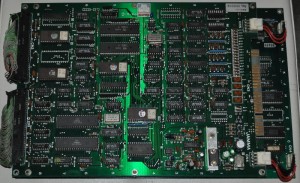 Vigilante – I looked at the MAME driver and decided it was a mess.  Several sets in there but using the bootleg as a parent for some reason, I decided to put it right and fill in some gaps like some versions using mask ROMs instead of EPROMS.  This one is US revision B. 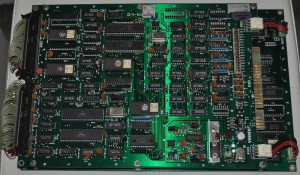 Vigilante – and this one is US revision….. Nothing.  That means this is actually the very first revision, there is an A rev which is actually a world board.  I found someone with one but he has no particular desire to help make MAME more complete.  Not sure I really want to own 5 of these.  Currently known versions are original, World A, US B, World C, Japan D, World E and US G.  So, we’re still missing F whatever that is.  I’m selling both of these US boards and a World E one now if anyone wants one. 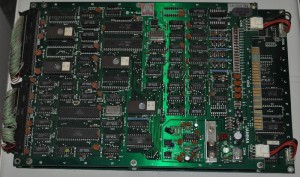 Super Duck – who says miracles can’t happen?  This totally unknown Comad game was pointed out to me on ebay so of course I needed to have it.  There is literally NOTHING about it on the internet aside from a blog post from Haze where he has emulation working.  You’ll be able to play it in future MAME releases.  It’s a sort of platform hopping collection game, and from playing it some more this afternoon it’s actually better than I first thought.  It was all very boring and predictable until a small sprite dragon thing jumped out of the water and killed me.  Fun fact – ‘Hell Out’ logo was found in the graphics ROMs.  The intro story talks about hell and Satan a lot too, and not at all about ducks so it seems likely this is actually the same game.  Whether the original named one ever actually came out, impossible to say.  It’s just as likely that it never got released and Comad just slapped a new name and player sprite on to throw a game out. 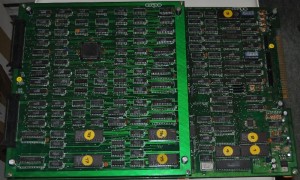 Real Break – already had a World version but MAME didn’t contain any revisions with the split sprite bank, and it turned out to be a new code revision too.  This PCB is actually quite interesting, hopefully you can see from the photo but Dynax/Nakanihon went really crazy with the security measure of scraping away part codes.  You often see this on custom or unusual parts on games, but on this they’ve done nearly everything.  Even the crystal oscillator.  Even the amp.  I’ve never seen something like this before.  Great game too, decided to keep this one and sell my old one. 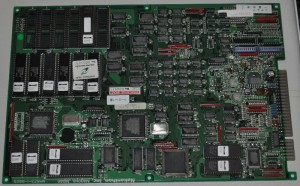 Playgirls 2 – a bootleg, runs sort of choppily, bought purely to dump for MAME.  It’s Galaga with girls, sort of.  Not such a bad game really but originals are far more common than bootlegs and they’re cheap too so I don’t see why this even exists. 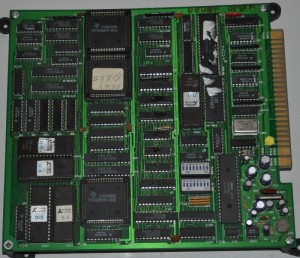 Marvel Land – Namco System 2 hardware is really cool.  It’s very powerful, can take ROM kits which is always nice if you have a PCB failure, and the sound section just like System 1 before it, is second to none.  The games though are a bit hit & miss, rough period for Namco.  Marvel Land is an example, it’s so nearly a great game, but ends up just being a serviceable one with some nice features the underused hardware is capable of. 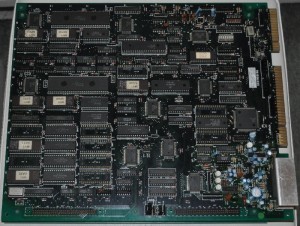 Marchen Maze – on the other hand, System 1 was a strong period for Namco, and this is their classic isometric platform shooter.  Apparently this might exist as ‘Alice in Wonderland’, the rumour persists but I’ve yet to see any compelling evidence that it ever did.  Perhaps only on a flyer or location test, since I’ve not seen it outside of Japan either.  Very nice clean board. 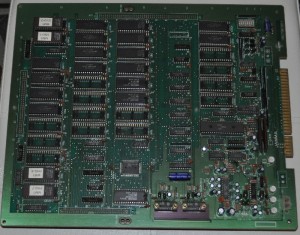 Gunlock – got this relatively cheap due to faulty player 2 fire button.  Should have been an easy fix, right?  Nope.  Heart sank when I saw someone had already tried, and that they’d decided to reflow the customs for no particular reason.  That quad custom top right is the I/O controller, and it was fried.  Luckily I was able to salvage one from a Taito Cup Finals but it’s a pretty awful job removing those and refitting by hand.  Came out quite well, looks tidier than the photo suggests. 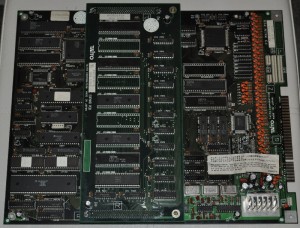 Cyvern – my continued on/off relationship with this game.  It’s a legitimate US cartridge but since I didn’t have a US motherboard it’s running on a region hacked Japanese one.  Note – it had a horrible sticky label which left lots of residue on after I finally got it peeled off.  DO NOT use alcohol to clean the glue up if you try this at home, it started to break down the black paint hence the ‘washy’ area along the lower edge.  Who uses soluble paint?  Why Kaneko, why? 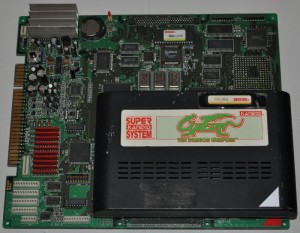 Cute Fighters – another one coming to your MAME soon!  This is Semicoms followup to SD Fighters, it has more characters and better backgrounds, but the audio sucks.  Previously only known to exist from a magazine scan but the protection has already been broken and it’s running in development builds now.  Getting it emulated also confirmed that the weird colours were in fact a PCB fault,  both colour RAM had failed, fixed now. 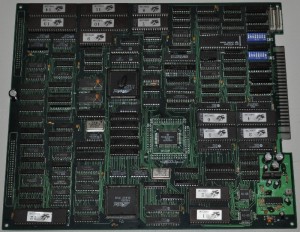 Cosmo Gang The Video – one of the better System 2 efforts, it’s a cute take on Galaga with lots of silly powerups and sound effects.  I hadn’t given it much time before but I’ve been playing it daily since it arrived.  Also came with original art/manuals.  Nice. 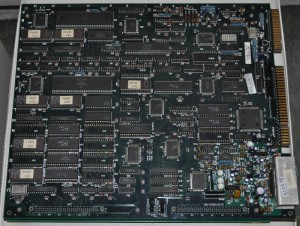