When I was young, my parents used to take us to Hunstanton fairly often, it’s a small seaside town in the northern part of Norfolk, and wasn’t that far from where we lived, just a couple of hours.

I’ve been under an unbearable amount of stress recently at work, and I decided it might help to go and see the sea for a day, and it did a bit.

There are two distinct areas of beach in Hunstanton, there’s the sandy bit with wave breakers which leads from the middle of the coastline up to where the funfair is (which was sadly closed on this cold out of season weekday). 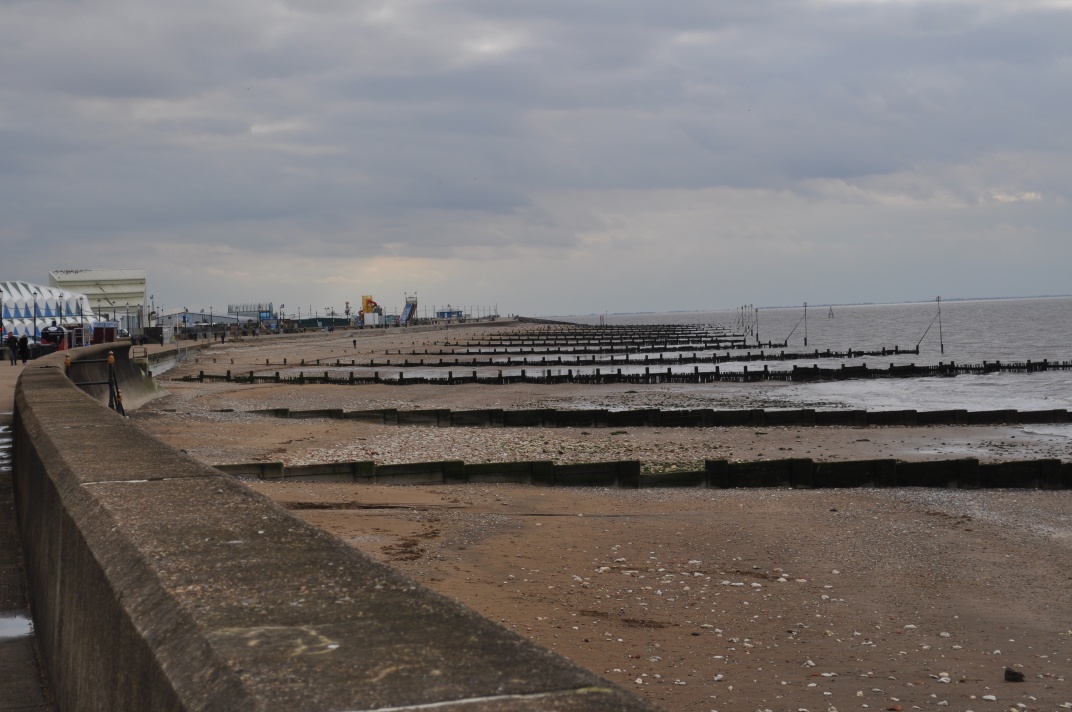 And there’s the prettier bit which granted isn’t as good for sand castles as you follow the coast to the west. 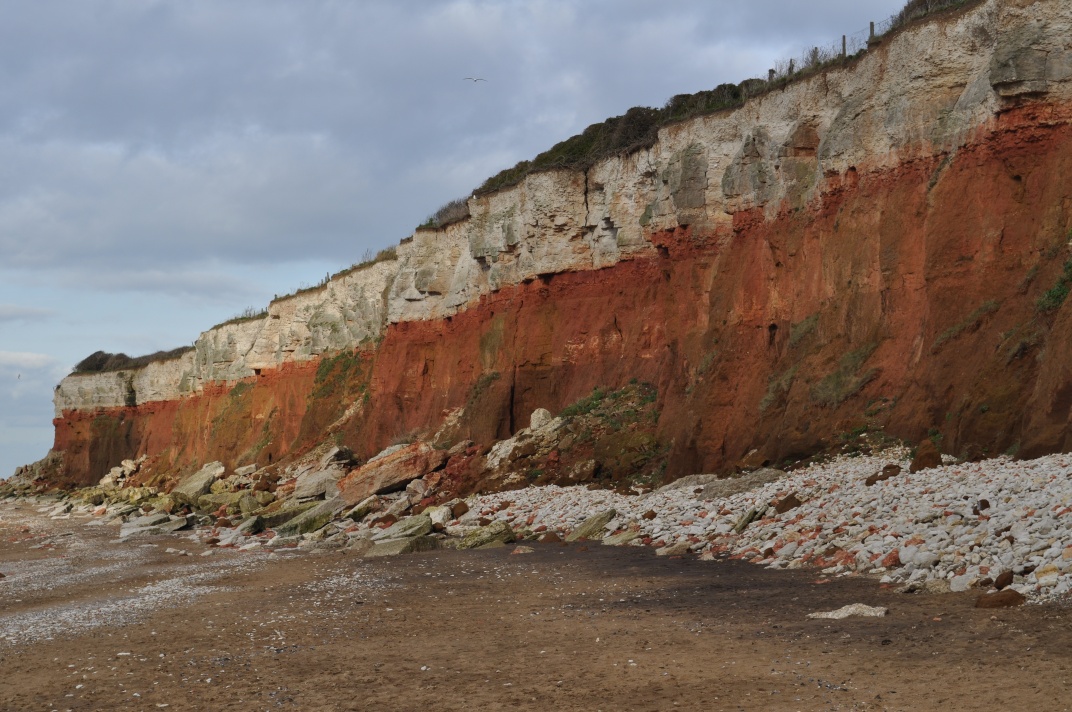 There are signs warning of the danger of cliff falls, but honestly it looked about the same to me.  In fact I was able to identify all the rocks I used to clamber around on when I was 6 or 7.  This is the rock where we used to sit and have the lunch mum would always have packed. 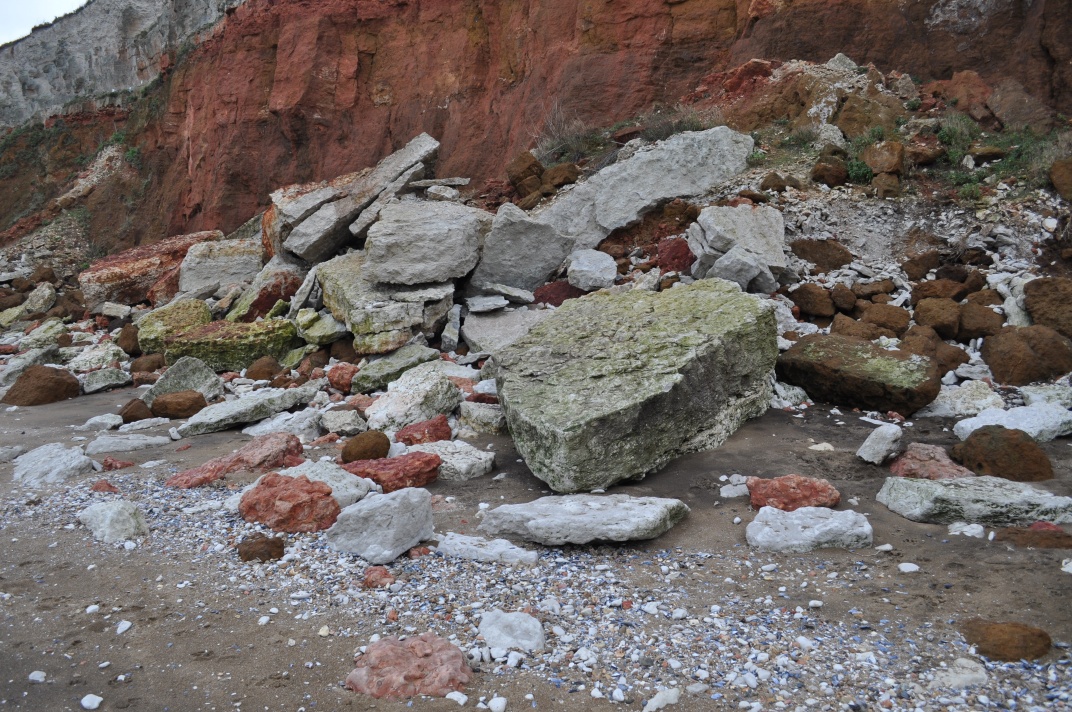 This part of the beach is really nice when the tide is out.  Honestly I had no idea when the tide would be in or out, and got lucky turning up in the early afternoon, it’s really quite pretty even on an overcast day.  The weed covered rocks extend for miles in the other direction, almost like an interlocking carpet in places. 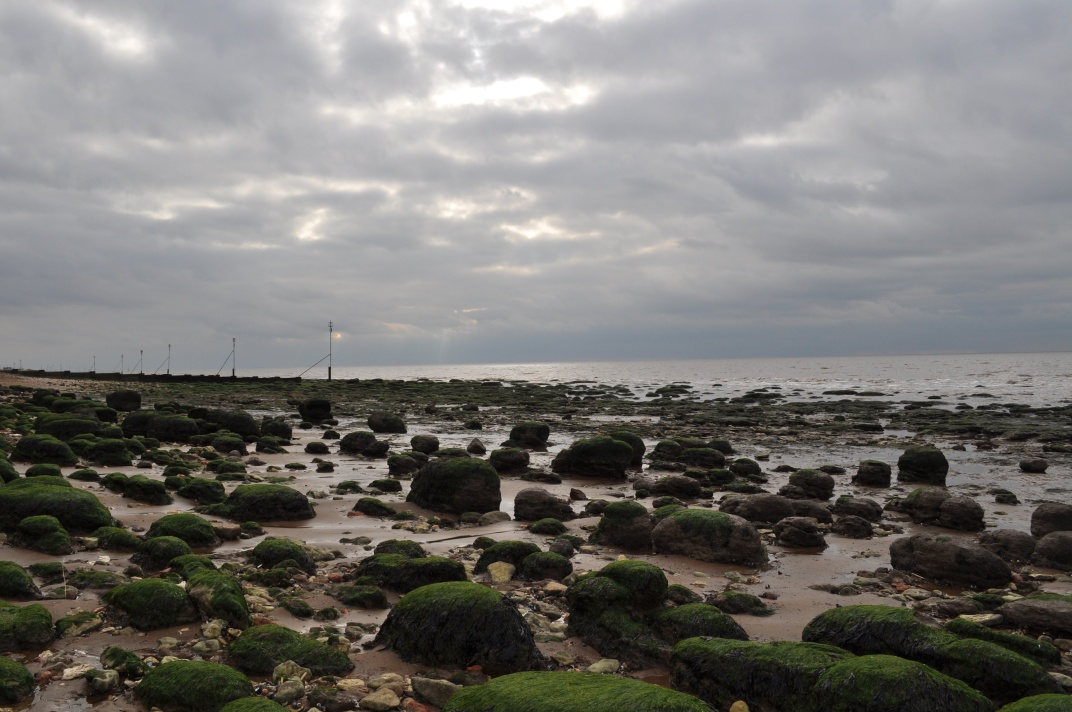 Birds are cool.  While I was poking around in the rock pools trying to find a crab to photograph (I failed), this guy came wandering past. Heading back to the main part of the town I stood for a bit contemplating the sea with a friend. 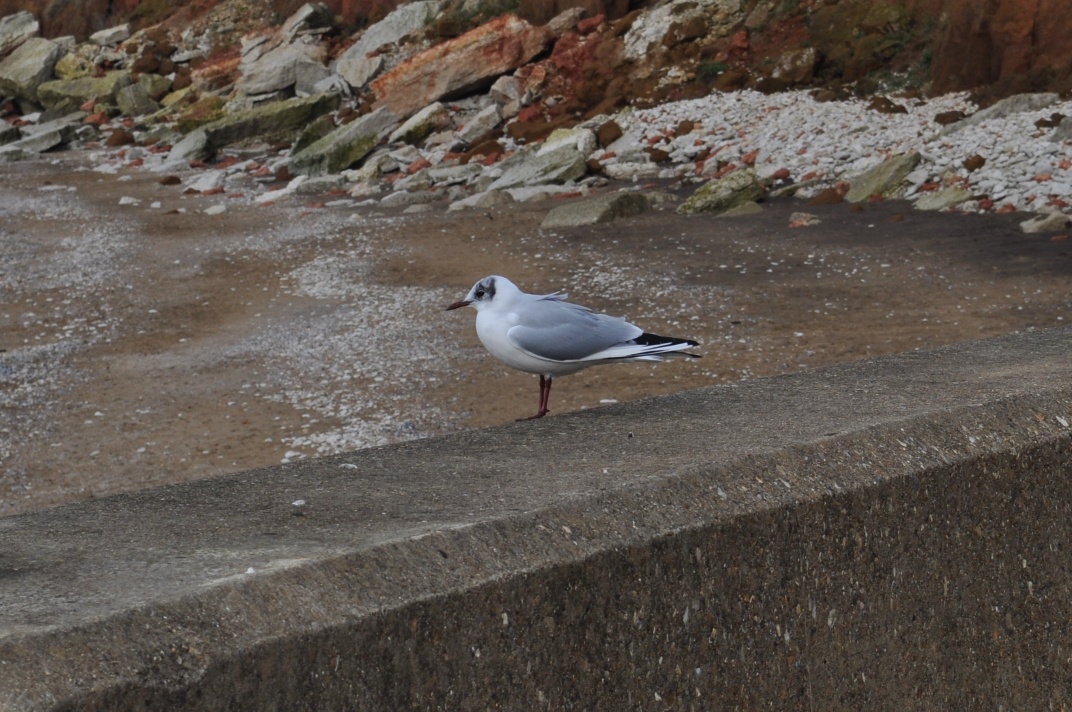 This was entirely unexpected.  Ducks having a day out. 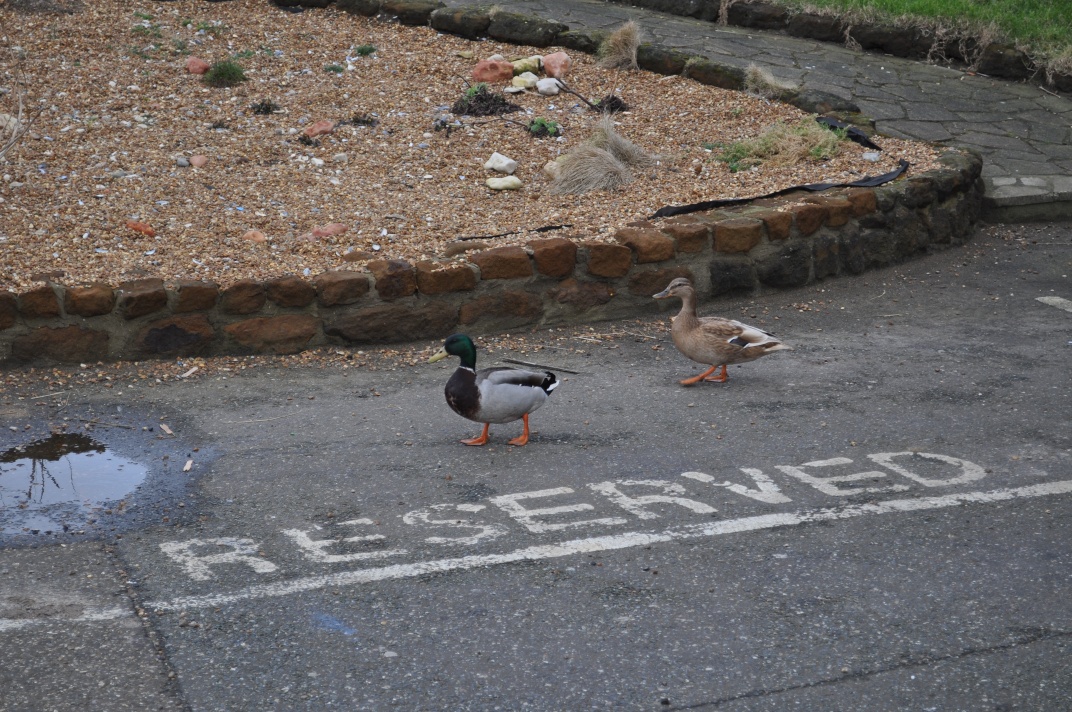 A bath is always a good way to wash the salt off. 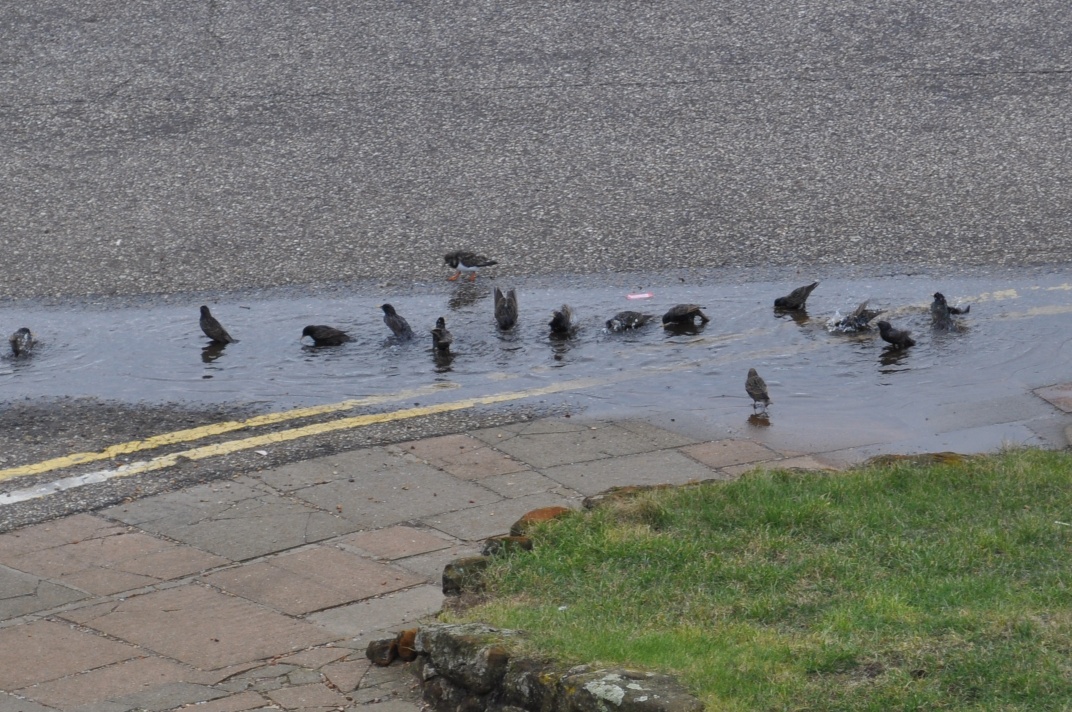 I’d decided I wanted to feed some seagulls.  Honestly this usually pisses off the locals who can consider them pests, but there are two points worth noting here.  One – I’m depressed and feeding animals cheers me up.  Two – I don’t care.  I went to the only open chip shop I could find, which I should have taken a photo of, and bought an open tray of chips.  This proved to be a huge mistake.  The gulls saw the open tray immediately, and I was harassed within a few feet by a growing flock of seagulls.  I saw a bandstand in the middle of the green and made a break for it.  Luckily I was able to divert them a few times by throwing a chip or two in the opposite direction.  Onlookers were amused by this. 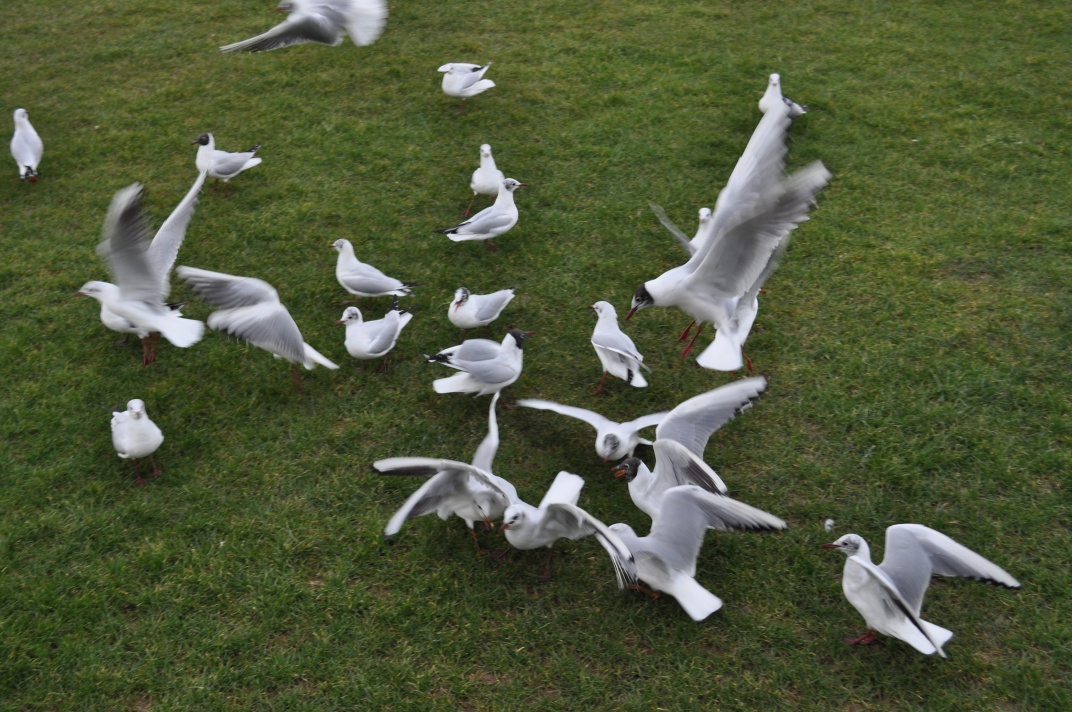 Once in the safety of the bandstand they started circling it like some kind of shambolic homage to The Birds.  It was perfect for feeding them though, and they seemed to calm down when they realised that I really was going to throw all the chips at them.  They started hovering and catching them in mid air, which was amazing fun.  Unfortunately I couldn’t switch to wide angle and capture just how many there were by this point because that would have meant putting the tray of chips down, unprotected. 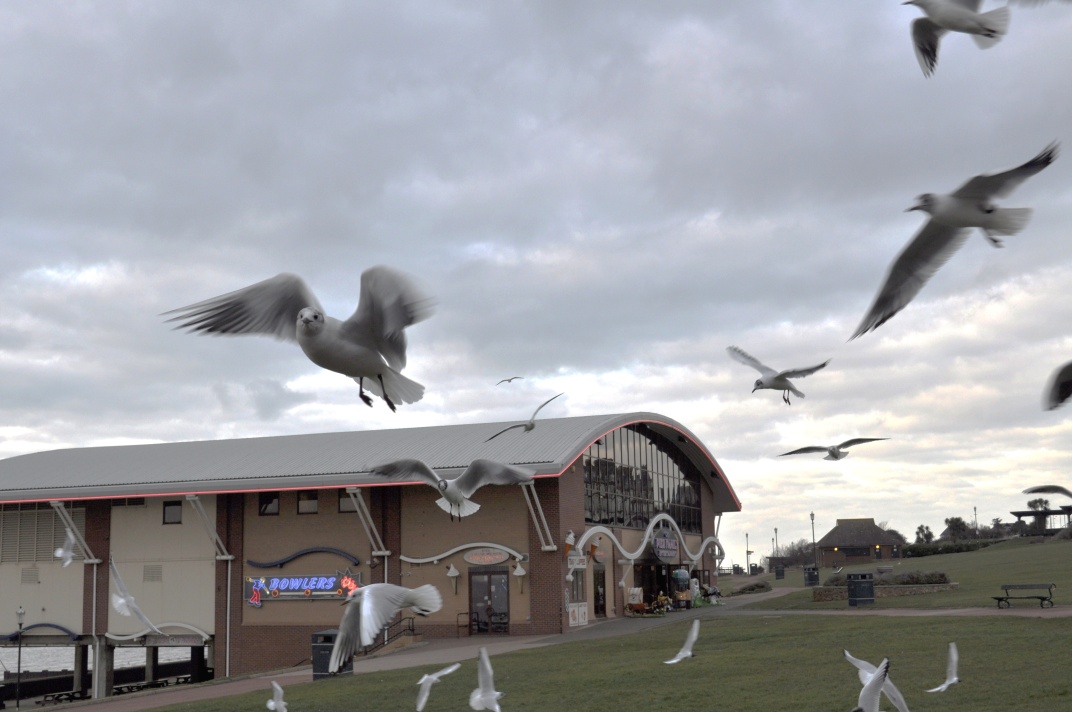 They only stopped following me when I visibly put the empty tray in a bin, and immediately flew away.  Friends of convenience.

You can’t go to the beach without checking out an arcade, and it was pretty depressing.  The arcade in the photo above used to be a smaller wooden structure, and I remember it had cool things inside like a Buck Rogers, a Robocop, and an ancient electro-mechanical car driving game with the road printed on a large rolling drum and displayed via a projector.  Now it’s full of fruit machines, coin pushers, cranes and redemption games.

Having won a thousand tickets on various games of “skill” and finding that all I could exchange them for was a Frozen stationary set or a One Direction bag, I sunk about £5 into a crane trying to win a Triceratops toy.  I failed.  However, I did find a coin pusher with a prize which was obviously close to falling off.  Pushers are rigged of course just like everything else there and you need the right combination of thickness of coins near the edge plus lightness of prize.  Fortunately, no coin pusher has ever defeated me.  In keeping with todays theme – birds. 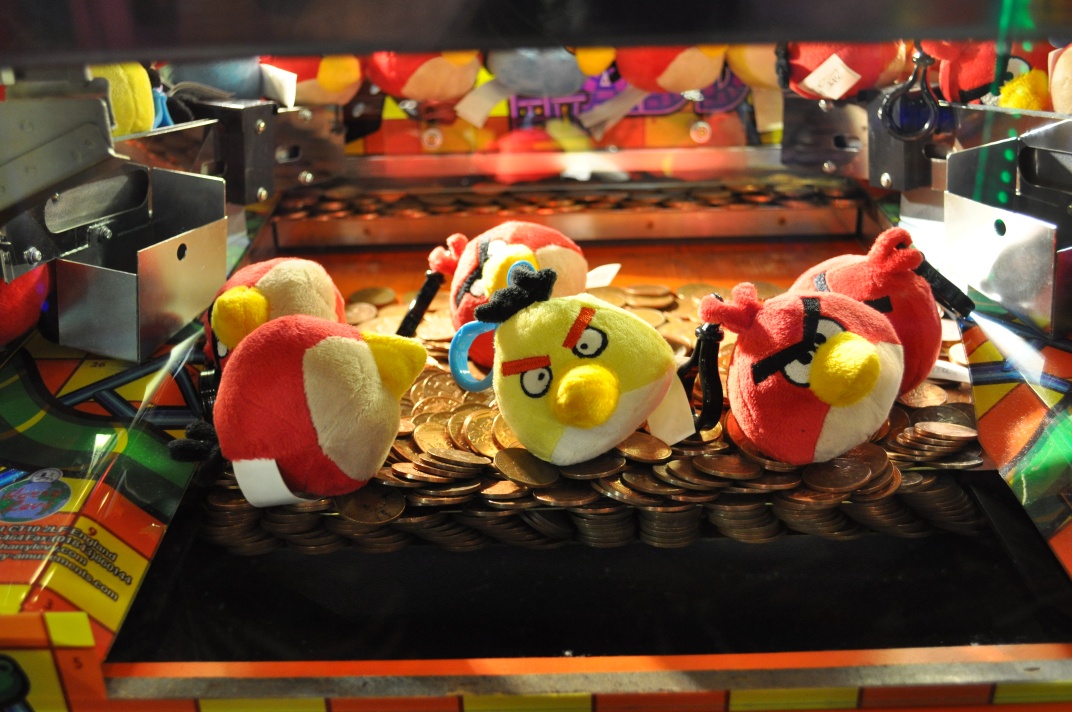 You see those stacks of inviting looking coins on the edge?  Well those don’t ever move, they’re almost like an advert – look carefully and you’ll see the real shelf.  As I say, coin pushers don’t defeat me. 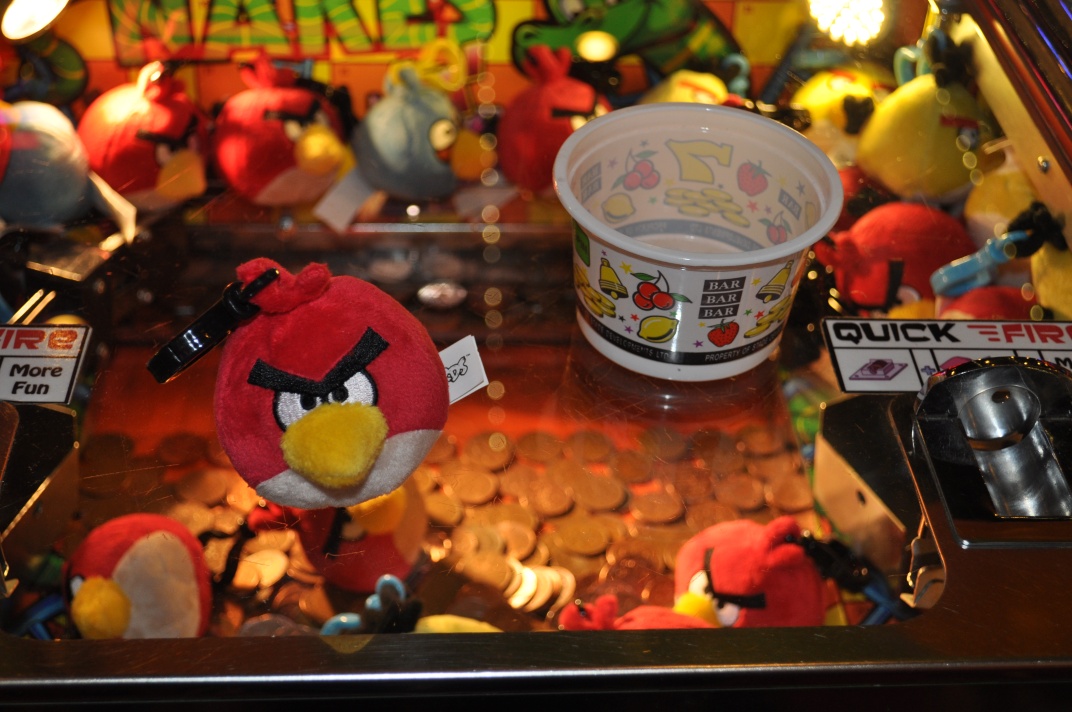