Another set of games which I’ve had arrive over the past few months – I’ve simply got most of the things I want to own now which aren’t so rare they can’t be obtained.  That said, this one contains something really special which I’ve already mentioned in another post.

Lasso – early SNK game with a cowboy who has to catch various animals and fend off wolves, it’s really good fun but the blue donkeys will make your life hell.  Original ROM labels missing from the lower board, not sure why as otherwise it seems standard.  Unfortunately it’s one of those games that rotates the old way and only flips for P2. 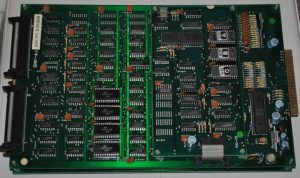 Gals Panic 2 Special – Japanese version of this game with different presentation and a mixture of anime and real pictures for the backgrounds, quite hard to find.  Gals Panic S2 is the best overall GP game in my opinion. 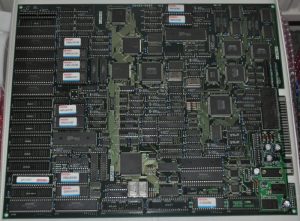 LED Storm (prototype) – this was a bit of a grail PCB for me as I’d been trying to track it down and then agree a deal to buy it for years.  In this version the cars can shoot, jumping is only possible by speeding up and driving into the side walls, and enemies are fairly sparse.  It’s physically different too with many wire hacks on an earlier version of the PCB before they added a third ribbon cable.  I guess at this point whoever failed to return it to Japan is safe from losing their job.  It’s interesting to see how much this game changed in development – and this one finally tells us why LED stood for ‘Laser Enhanced Destruction’. 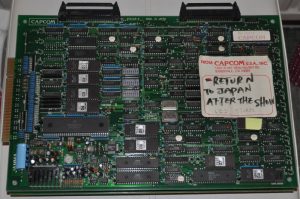 Ring No Ohja – Japanese version of The Main Event, a fairly decent wrestling game from Konami.  Was sold as working but the voices were all wrong as an incorrect speed of crystal had been fitted in a previous repair. 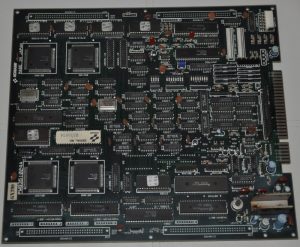 Nichibutsu DVD X-Rate system – this one came after the High Rate system but is actually more primitive in function – the DVD drive is controlled with an IR emitter which you stick in front of the sensor, leading to lots of ‘please wait’ type messages and slow seeking between chapters – I haven’t seen any mid-game video footage used.  The motherboard is a modified High Rate one with a different sub board.  My theory is that this only exists because the RPC Phase 1 regioning used by High Rate drives was disallowed from year 2000 onwards, and the supply of drives vanished – there are wire hacks and cut tracks all over these.  Video quality is slightly improved from X-Rate as it’s just a passthrough from real DVD-Video. 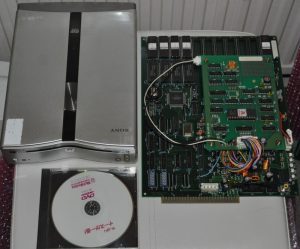 Nichibutsu DVD Next Generation system – the final iteration of Nichibutsu’s DVD mahjong platform.  This one is more streamlined than the performance of X-Rate as the drive is serial controlled bringing back video footage mid-game, and the video quality seems higher.  A truly bewildering number of potentiometers are on the PCB only some of which are documented. 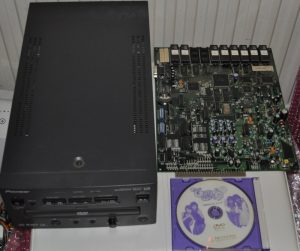 Seibu CATS system – more DVD based Mahjong hardware – this one is the most advanced of the systems I own and some games optionally supported a touch screen, drive is serial controlled.  Unfortunately my drive isn’t working properly so the system is currently unusable and I’m not able to make videos yet. 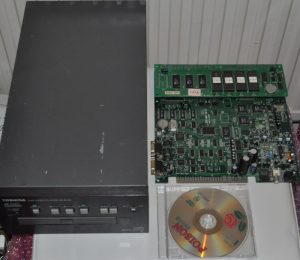 Bubble 2000 – it’s Puzzle Bobble with cavemen instead of dragons and women in the background.  There’s not really much more I can say about this.  Elfin is better. 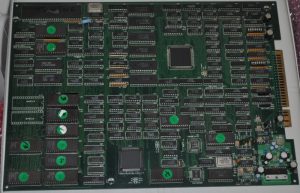