Some more stuff that arrived over the past week or so.  Interesting batch this, one problem you end up with when collecting Korean games is that sometimes it can be hard to work out if something is a bootleg or not.  Semicom are particularly difficult in this regard due to their rarity (mostly because people just chuck this stuff away) and it can be hard to even find comparison photos.  The final bit really muddying the water is these games would have been produced in the same factories as actual bootlegs in many cases..

Twinkle – followup to Hyper Pacman by Semicom.  Sold as working, arrived with input faults and a strange glitch when fading to white which may actually be normal for these boards, I can’t find a single person who owns this to verify against.  Inputs fixed now of course. 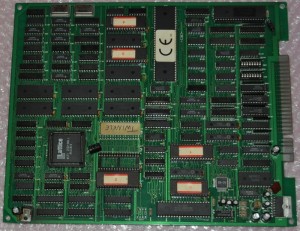 Xyonix – this is by Philko, who generally had their name screened on the board or stuck on the ROM labels.  I’ve seen a bootleg of this, but this one is missing the edge connector key, has no Philko label and generic ‘hello Korea’ ROM labels.  Philko were Korean of course.  I believe this IS original though, made for the local Korean market.  There are two heavy pointers to this – firstly the amp has a heatsink and the bootleg I saw doesn’t.  Second is less obvious until you realise – the ROM sockets are blue, which is very unusual but common on Philko games. 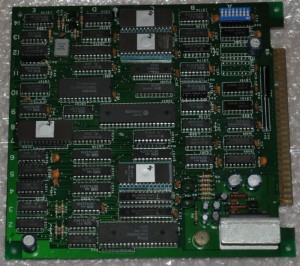 Flak Attack – a very average shooter from Konami, I just like it because of the awesome tank track sound effects on the first boss.  Came with original art too.  Same game as MX5000 in the rest of the world, but this Japanese PCB is different and has ROMs on a daughtercard with a ribbon cable underneath it. 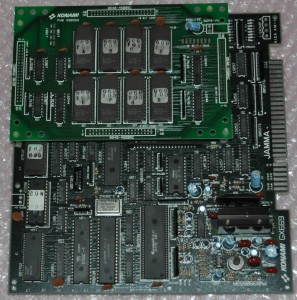 Shao-Lins Road – yet another SLR PCB, I’ve got four now – this and another one are for sale.  I only bought it because it was bundled with two others I actually wanted.  I can’t understand why these don’t sell, the game is amazing and cheap. 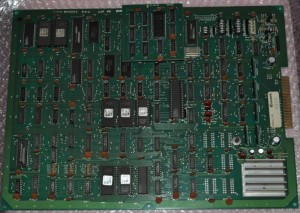 Final Tetris – the first Semicom game, in fact they were called Jeil Computer System at the time.  No labels, different EPROM types, no edge key.  Is it a bootleg?  I honestly can’t tell you – I can’t find any photos of the game that don’t look the same as this one.  That diamond sticker is commonly found on bootlegs.  And on older Semicom games.  Who can say?  Does the J at the start of the model mean Jeil? 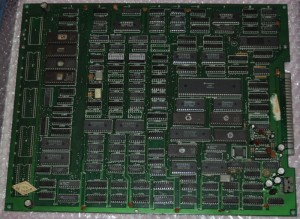 Circus Charlie – awesome.  Only non-creepy clown in the history of clowning.  Quite happy to have picked this one up a bit cheaper than it’s been selling for recently. 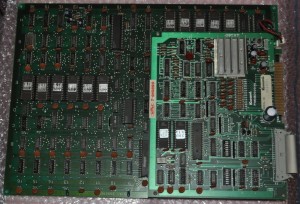 Blomby Car – fairly poor World Rally style game from an obscure Spanish manufacturer.  Another original with no edge key.  At first the game seems unremarkable but OK, but after a while you’ll notice all is not right with the handling, and later they stick trucks in the middle of the road to crash into, and road signs that POINT THE WRONG WAY. 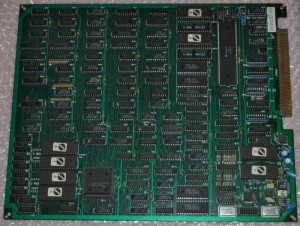 Yie Ar Kung-Fu – classic, shame someone tore off the main Konami sticker when trying to hack a sync inverter onto the board.  I’ve since peeled off the extra chip and wires and put it back to normal. 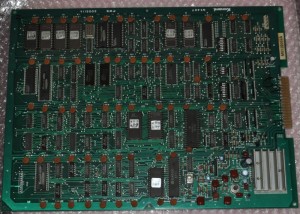