I’ve been trying to find the box for my GP32 handheld.  I’m the sort of person who keeps boxes for everything, because … well mostly because I’m lazy, but also you never know when it might be useful, and you never know what things are going to become valuable in the future.  The GP32 it turns out is not one of those things yet. 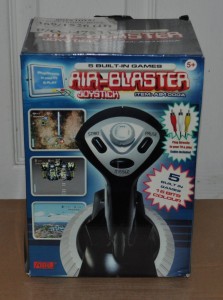 This is a TV game of sorts – the Air Blaster Joystick.  It runs on 4x AA batteries and plugs straight into your TV – the game is all inside the joystick itself.  It has 16 bits colour, and 5 games.  These appeared in a variety of types over the years, I still have a C64 one shaped like a Competition Pro stick somewhere too although I can’t find it.  Probably in a box somewhere. 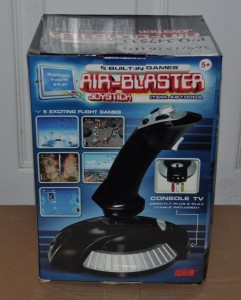 This one is like those horrible cheap flight sticks you used to get at Dixons in the ZX Spectrum days, but it’s actually even less well built.  As well as the four nearly useless directions because it’s so wobbly and flimsy, there are some buttons arranged at random, and a hat control which … just does the same four directions, but is no better than using the whole stick. 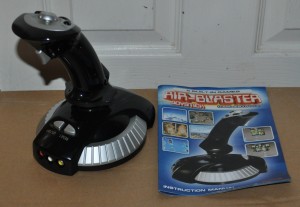 It’s still in pretty good condition, since I bought it new and then forgot about buying it.  I don’t even know when I bought it, but it was sometime after 2006 since that’s when it was made.  Until now I’d never even tried it.  Turns out I hadn’t missed much, there are two Afterburner style games and three scrolling shooters.  The back of the box suggests they have bosses but I didn’t find them.  So you too can enjoy the AIR BLASTER JOYSTICK, I recorded it.  Sorry the quality isn’t great, I’d forgotten I could plug this directly into my capture PC and ran it through a DVD/HD recorder instead.

I’m not very good at it, but in my defense the stick is almost impossible to control the games with.  I’ll probably put it back under the stairs.