A big update, I really need to start posting a bit more aboout other things though.

Turtle Ship – it was cheap and I’d incorrectly remembered that mine wasn’t in very good condition.  However, this ended up having an interesting ending.  While comparing my old and the new I noticed two things.  Firstly my old one was fully in Korean text, unlike any versions in MAME.  Secondly the new one had grey bullets and a different level order, again not in MAME.  I’m not entirely sure what order the games all appeared in, but I suspect the grey bullets one is the oldest revision, the Korean is potentially a newer one since it actually has a late 1988 date on the screen.  Both have been dumped and added to MAME now, I actually quite like this game. 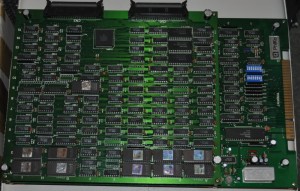 R-Shark – replacement for my Korean one.  Actually as a statement that’s pretty ridiculous since they’re all Korean, but this is one of the earlier boards with all socketed ROMs and nicer labels than the one I had before (which is now up for sale).  Pretty awesome game really, very nice looking and I’ve now found out what the MYSTERY THIRD BUTTON does courtesy of Emuser. 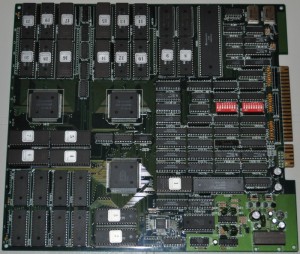 The Last Day – this is the World release of D-Day, one of Dooyongs first attempts at making a shmup.  It’s not bad really, pretty difficult due to high bullet speed.  Quite a rare game and I found this pretty cheap. 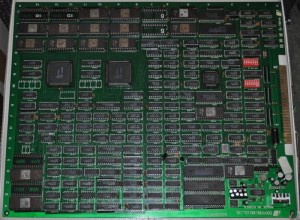 Mr Kicker – more Semicom goodness!  Also this is (well, was) an undumped revision which we’d been looking for.  I got offered it by a sales contact along with a game I was buying from him through ebay.  It’s a fun little maze game where you can kick a ball around to collect items or kill enemies. 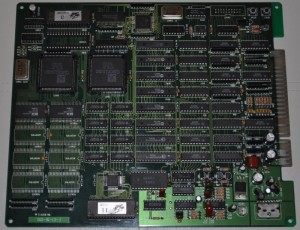 Paradise – Escape license.  Another one missing from MAME until now, only found out after buying it to replace my old one.  Seems to be the same as the other versions aside from an improved slot machine animation during girl select.  I also found out my old one was missing from MAME too…. 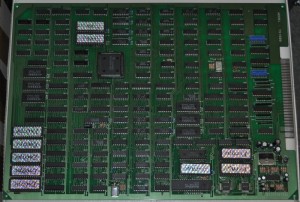 Mirax – strange old 3d crosshair shooter from Current Technology, reminds me of Exerion.  Not sure how rare it is but I don’t think I’ve ever seen one before.  That while block is some kind of epoxy covered effort at security, but I don’t think it contains a battery – it would have been long dead by now. 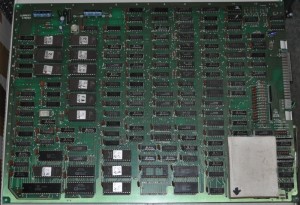 Last Duel – took a while to arrive since it was initially sent to the wrong country, then back to Japan and out to me!  Arrived with a sound fault too and given the seller I’m quite disappointed that they didn’t realise – if those small caps near the op-amps get damaged you can lose sound channels.  On to the game, this one always struck me as Capcom having come up with the engine for LED Storm, and then not really knowing what else to do with it – the reality is that Last Duel came out first though.  The game alternates between bike/road stages which look very, very similar to LED Storm, and some fairly solid but unspectacular shooter stages with a ship.  Strange game.  Came with original art which is nice. 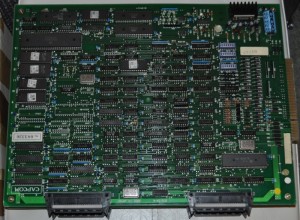 Mad Motor – this one is a real rarity.  It’s a borderline terrible scrolling Road Rash type game from Mitchell.  The collision detection is strange, you often get bounced around like a pinball or launched into the air for no reason.  When low on health you turn into a demon creature and your bike turns into a DEMON TRIKE.  The game makes no sense at all.  Unfortunately I had to do quite a bit of cleaning and coating to resolve some mostly ignored corrosion on a few of the SMT chips.  Seems solid now. 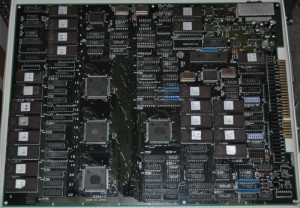 Hook – found this cheap on a forum with a sync issue.  Arrived and sure enough, that’s a sync issue.  Actually the PCB was in pretty bad condition, I’m surprised the seller didn’t mention the fact that one of the chips had been replaced and resoldered seemingly with a blow torch.  Someone had also previously tried to fix the sync problem and due to being fully loaded with Irem Deathcaps, the sound section and edge connector could have been better.  I sacrificed a Major Title 2 to fix it and bring the condition up to scratch.  Moving the license seal to the new top board was a challenge but it came out pretty well. 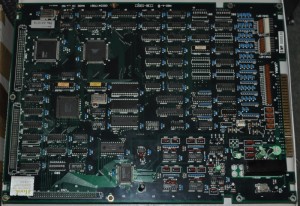 Golden Axe – been without one for too long – it’s a US version without suicide which is IMO the best type to own.  Quite nice condition aside from a badly damaged capacitor near the amp which made the sound crunchy, it’s all good now.  All correct labels.  Nice. 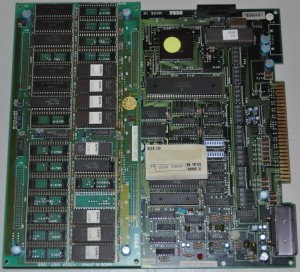 Gyruss – I’ve had a Centuri Gyruss (only difference is 3 ROMs, they’re all made by Konami anyway) for quite a long time, but it had always had an intermittent reset/crash problem which I never managed to track down.  I bought this so I could replace it and help to diagnose the problem.  Nice to find the mono sound connector included, that’s actually fairly uncommon since most cab supplied ones in the west were in stereo cabinets and didn’t come with them.  I managed to fix my old one too as a result so that’s up for sale. 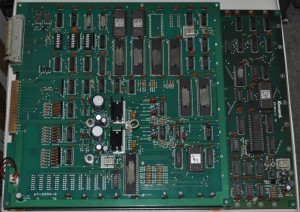 Dark Seal 2 – followup to the isometric dungeon crawling original.  They turned everything up a notch for the sequel but honestly I think the first game just feels ‘cleaner’ visually and to play.  Board arrived in stunning condition, didn’t even need to dust it. 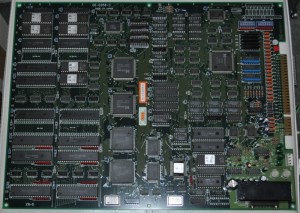 Fighting Layer – one of the early polygon people fighters, this time from Arika on Namco hardware.  It’s quite interesting to play but honestly I think Dead Or Alive did it better.  I’ll probably get burned at the stake for saying that.  Whatever, I’m a DOA fan.  Suck it. 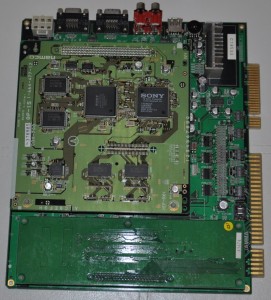 Cookie & Bibi’s 3 – good old Semicom.  Clone a good game and what do we do?  Make sequels!  It’s Puzzle Bobble with squirrels basically.  This board is in … terrible condition, the tracks are mostly corroded through the solder mask and there are still some rusty components I need to replace.  Sadly it’s also quite uncommon, not like I could buy an alternative one.  In fact the edge connector had been sanded down to copper so I had to solder-replate it.  Not ideal but it’s better than exposed copper.  If you have to do this ever, make sure you have a fume extractor on your bench. 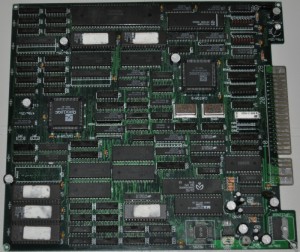 Blast Off – now I own all the Namco System 1 games I wanted!  Hard to find because it only came out in Japan, this is a sort of sequel to Bosconian, while being absolutely nothing like it at the same time.  I prefer Bosconian as a game, but the arcade version of that always felt like a let down because I’d grown up with the music from the Spectrum 128K version, which was catchy and amazing – look it up on YouTube! 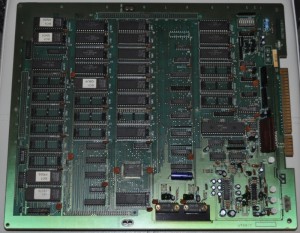 Air Duel – saw this on Yahoo, from the blurry pictures it looked like the art and PCB serial numbers matched so I rolled the dice.  They did!  Forgot to put the bolts back on for the picture – since someone forgot to fit the top board supports I’m letting it all return to proper shape before bolting it together properly.  The plastic clips that hold M-72s together as standard weaken over time – you can either replace them with brand new ones (cheaply available in the exact right size and style from China), or replace them with metal standoffs which make the boardset far more rigid and allow the fitting of 6 feet.    This was of course at some point an R-Type like so many others, this one is nice because it’s gone straight from R-Type to Air Duel with a proper Irem supplied kit – the art and the sticker applied to the middle board prove this.  The middle board sticker was rarely applied and is even more rarely still present these days.  I’ll be selling an Air Duel at some point soon then, since I don’t need two. 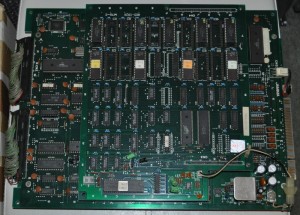