Well it’s been a little while since I posted some of these, it was nice to have someone tell me on a forum message that they like reading these because there are games they haven’t heard of.  Well, if obscurity is your bag there are some really interesting things this time around!

Terra Cresta – pretty much everyone should know this game by now, it’s a very popular scrolling shooter from Nichibutsu and the first to feature their ‘split the ship up’ special ability which was seen in countless future games including UFO Robo Dangar and Armed-F.  It’s also very interesting in that two versions of this PCB exist, the originally released boards (by far the majority) used YM2203 for sound, which gives it somewhat simpler and more melodic music.  The later revision which I think came out in Japan only uses a YM3526 instead which is a much more capable chip, and it’s the first time you’ll hear the Nichibutsu ‘house sound’ (courtest of Kenji Yoshida) which continued from then onwards.  It’s a great crunchy synth style sound which is almost unique to their titles.  The good news is converting a 2203 board to 3526 is really really easy, they’d already designed the game with the 3526 in mind anyway…  This one is a converted board, the 3526 originals in Japan are hard to find and very, very expensive. 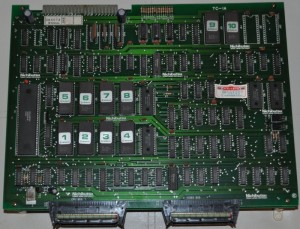 Storm Blade – very respectable Visco shmup, I’ve owned it before but sold it during a bad money period.  It’s also a little on the easier side, so my kind of pace these days.  Between this and the amazing Vasara 2, I really do wonder what Visco were going to come up with next.  They were definitely getting better, and for the price in todays market the two games are a pretty good deal. 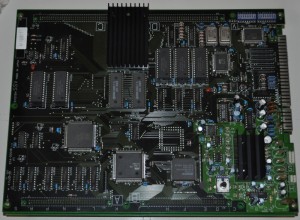 Sei Senshi Amatelass – I’ve seen three of these for sale in my time collecting, including this and the bootleg I already owned.  I’ve been searching for a while for an original and while it cost a lot, I had to grab this as soon as it came up.  It’s a vertically push-scrolling shooter from Nichibutsu somewhat like Commando in play featuring a valkyrie who occasionally gets to ride a jetbike.  It’s got fantastic music and lots of weird graphical design.  You should definitely check this out in MAME.  I may sell my bootleg one now (it’s a straight clone and excellent quality), not sure yet.  Some of these Nichibutsu titles really are absurdly rare now. 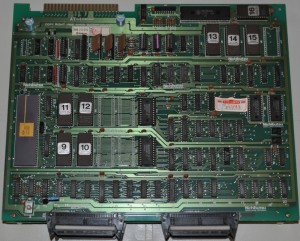 Pleiads – sequel to Phoenix and despite the lovely permanent label someone has added (seriously I tried, it won’t shift), it’s an original Tehkan board.  The sound in MAME is incorrect for this game, it’s pretty fantastic in reality – there are a few recordings on Youtube taken from PCBs.  I thought I owned a Phoenix adapter, and I cannot find it…. 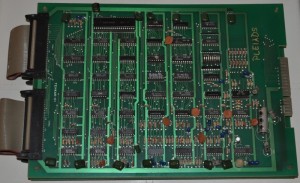 Quiz 6000 Academy – and then it was time for more SuNA collecting. 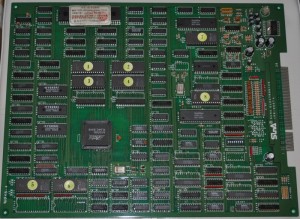 Ninja-kun Majou No Bouken – or Ninja Kid as some people call it.  The first and by far the hardest to find of UPLs ‘little Ninja dude who can jump really high’ games, honestly I prefer this to the technically better sequel though.  It’s usually very expensive in Japan but I managed to get this for a reasonable price in the UK, very nice condition too.  Pro-tip – both Ninja-kun games are available on Japanese PSN for the PS4 now courtesy of Hamster. 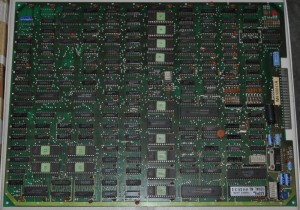 Penguin-kun Wars – sort of like Dodgeball, if you only had left and right and a whole stack of balls to throw.  You’re a penguin of course, and all the other animals need to go down, or they’ll laugh at you.  Serious business.  I got this very cheap (80 euros) after Happy Manor tried to ask $350 for one.  It’s the English revision though and came with something I’ve rarely seen – actual English language instruction cards, I’ve got some Robo-Kid ones too like that. 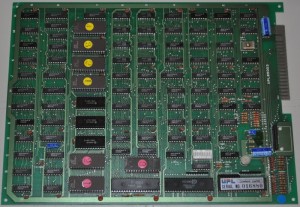 Lightning Swords – World revision of Ken-Go which you can only find in Korea (we’ve seen two but I failed to win the first one).  Seems to be official although you’ve got the typical Korean short cuts applied to what is otherwise a Japanese spec board – no heatsink, cheap type of interconnects and no proper labels on the EPROMs while the mask types are correct.  I still can’t make up my mind whether this game is mediocre or just really bad – it’s certainly no Ninja Spirit despite being an obvious sequel in .. spirit.  Music is nice.  You’ll be able to play this in the next MAME since I’ve dumped it. 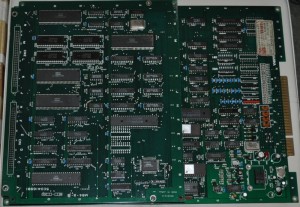 Monster Slider – more SSV hardware.  Very strange puzzle game a bit like Puyo Puyo, if Puyo Puyo had the floor at an angle which you could flip left and right, causing individual tiles to slide down the slope until the floor/other tiles stop them.  Er… bad description, check it out on Youtube.  It was exceptionally cheap and I’d planned to use the motherboard to swap with a slightly tempramental Vasara one, but I feel bad about it now because the game is quite endearing.  It’s also bloody impossible to beat the AI.  For me at least. 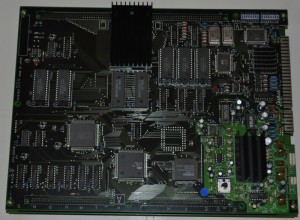 Exed Exes – another inexplicably expensive game which isn’t really rare at all (also known as Savage Bees).  It’s an early vertical shooter from Capcom with some nice music and an insect theme which carries into a lot of hexagonal shapes in the background.  It’s actually pretty decent and I got lucky with this one – cheap untested on ebay and despite the best efforts of Pitney Bowes shipping it loose in a box on behalf of the seller, it just needed a new sound capacitor or two.  I’ll be writing an article on PB soon.  I have photos showing the scam they’re running with ebay. 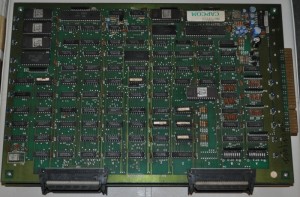 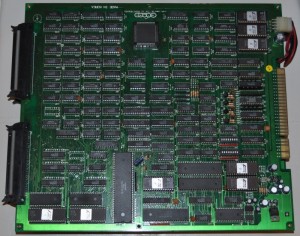 Astro Blaster – MAME does not do the audio in this game justice at all – really oldschool analogue sound section.  Inside the huge metal box there’s a backplane with no less than 5 PCBs making up the boardset.  The JAMMA adapter is serious business and luckily came with it – although the amp mounting needs strengthening.  As for the game, it’s a wave based early shooter with a variety of different waves similar to games like Gorf and Phoenix but with a pain in the neck laser which can overheat if you spam it – you’ll live or die based on accuracy in this game.  It also has a lot of in-game speech, that great robotic style you don’t hear anymore.  One of the oldest games in my collection dating from 1981. 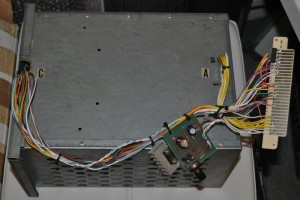 Atomic Robo-Kid – I’ve had two of these for a while but my second board takes 5 minutes to warm up before it will run.  Not knowing if it could ever be fixed (I’d tried before) I bought this US revision one because it was really well priced.  With both on the bench I’ve isolated the problem on my older board and it should prove an interesting repair article when the parts arrive.  This game is an unsung gem in the world of shooters, and I highly recommend trying it in MAME.  It seems to have done better as a home computer port in Europe than it ever did in arcades.  You play a cute robot with boosters, a massive laser and a big nose, who doesn’t like those? 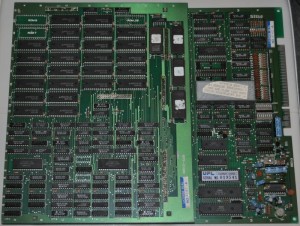 Asterix – it was cheap and broken, and I felt like something to repair, so I did.  One of Konami’s scrolling beatemups from the same period as Simpsons.  It’s pretty good but I’m probably not going to keep it – one for fans of the theme, very authentic sprite work and animation and some good bosses.  Fault was a broken LS253 but I had to replace one of the input SILs to prove it first.  That and a volume control had been broken off but I had a correct spare on a parts board 🙂 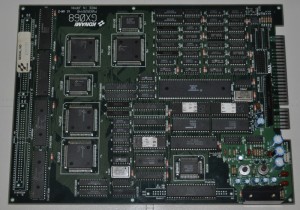 Pass – it’s pretty much a variation on Mile Smile but by the Korean company Oksan, it’s not too bad really but Mile Smile is better in every department and extremely cheap.  It’s Korean and weird and I didn’t own it yet…. 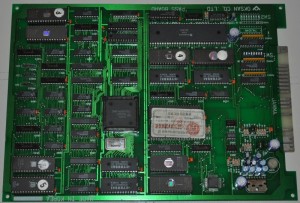 Ponpoko – a strange and totally unlabelled bootleg of Ponpoko with a JAMMA pinout.  It’s indistinguishable from the original pretty much.  Not sure why but this game was really popular in Korea, loads of bootlegs floating around plus of course Candory which was the Mario themed boot/hack.  Let’s not forget the bizarre song in the game: 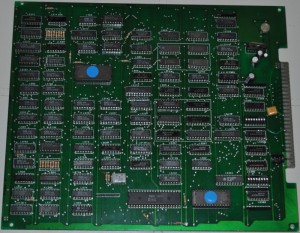 Gardia – this was hard to find, and I had to buy it from Japan with chips obviously missing and take a chance on it being repairable.  Well, there was good and bad news.  The good news is that bar some cosmetic damage to the capacitors and the missing ROMs, there was nothing wrong with it at all – an operator had simply used it for parts (ouch….)  Bad news is that it was an undumped code version and 2 code ROMs were missing.  I’ve had it running with incorrect data as those two purely by chance are the level data, but I’m waiting for dumps of them having found that fortunately someone I know had the same version in storage.  I dressed it up with correct labels for the photo.  Such vanity.  Sadly this kind of part raiding by ops of working games was not uncommon. 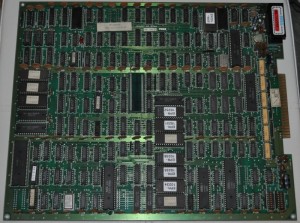 Air Duel – nobody saw this coming..  Air Duel is a pretty decent shooter by Irem which is the first identifiable game to have been made by the Nazca team who went on to create other games for Irem and later the Metal Slug series for SNK.  What’s unusual here is that Air Duel is M72 hardware, and this is the more compact M82 set.  Other M72 games have been found on newer hardware before (Dragon Breed, X-Multiply, Hammerin Harry, Cosmic Cop) but Air Duel was considered M72 only until now.  Also interestingly the board is definitely a converted Major Title – there are still Major Title ROMs left in spots on the video board which aren’t used by Air Duel.  However all the newly socketed chips are definitely legitimate Irem ROMs with correct labels (pretty bad shape but you can read them still), and Chris Hardy has taken a look at the code and we’re pretty happy it was assembled from original source.  Current assumption is that this is a World rev prototype which never saw full production.  It turned up in Korea, and the seller suggested the extra silver labels with numbers on them would have been for cloning the set and producing more of them.  It’ll be in MAME shortly, but can’t find any differences other than the boot sequence and a lack of Japan only disclaimer. 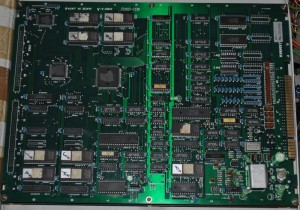