There’s a bit of a PCB storm going on here at the moment.  There’s actually another batch to come too and after that thankfully I have nothing lined up and a fairly short list of wants.  Expensive ones.

Twins – a mahjong solitaire game from Italy, never seen one of these before.  Every odd round has a woman in the background in shades of one colour, on the even rounds she’s in full colour.  It’s not bad as they go, one of the tiles lets you have an extra curve – if you know how the matching rules on these work, you can normally only curve twice to link two tiles, these let you make a third (and even stockpile the option to do so) which can fix ‘unsolveable’ problems.  Arrived unreliably booting, loose capacitor in the reset circuit. 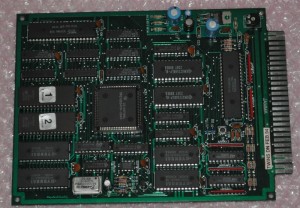 Sadari – by Dooyong, this is an odd game where coloured blocks fall into a container, you can grab one at a time and move them around while they fall to try to make lines of three or more, this is quite difficult since they end up falling several at a time later on.  It’s ok enough, naturally there are hand drawn girls between the rounds. 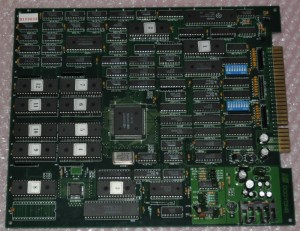 Robocop 2 – pretty bad compared to the first one, but I needed it because I’m such a fan of the films.  The first game is vastly superior (and more common, and cheaper).  I don’t think I’ve ever seen one in the UK with the correct code ROMs on it, I wonder if it was actually released here at all. 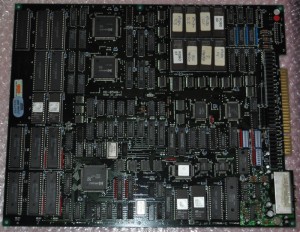 Rong Rong (EU) – Another mahjong solitaire game, this one is by Nakanihon which means two things.  One, it has women (hand drawn) in it and lots of suggestive speech.  Two, it’s actually rather good just like Real Break.  In this one you can chain tile matches and it all gets a bit lively.  Blue PCB is cool. 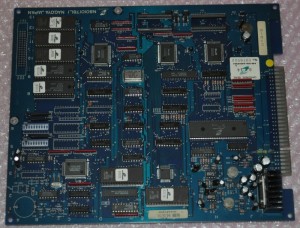 Pushman – Comad collection grows!  Strange game where you have to push tiles into the gaps so you can reach the exit, later on there are conveyor belts and so on, annoying gates, and enemies.  I bought this one through a friend since the ebay seller was US ONLY to replace one I got from a US shop which had a small edge glitch on the picture.  Well…  not only was this one faulty (a dead LS175 causing jailbars), but the edge fault turned out to be normal for this game.  A bit of a waste of money really, but at least this one is in nicer overall condition. 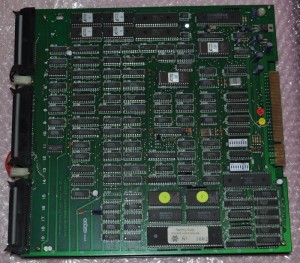 Puzzle Club – Yun-Sung decided to roll a bunch of minigames including ones they’d already released as standalone titles (for example Magic Bubble) together for this board.  Some of them feature women, but I noticed all the ones included are ‘tamer’ versions. 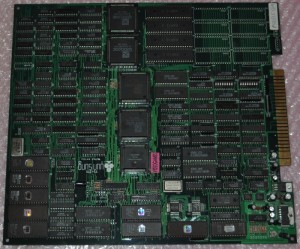 Pocket Gal VIP – another video pool with women, dumped this one for MAME since it’s a clone of Gals Hustler.  I’m not sure who made it because the copyright is in hardcore Chinese.  Actually having the board has made me notice that the speed in MAME is waaaay off.  Also had a severe graphics error with missing bitplanes, which the seller neglected to mention.  I found it was a manufacturing flaw, a totally undamaged track underneath simply had a gap in it. 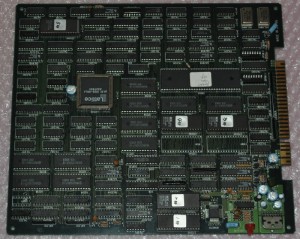 News – sold to me as ‘Virus’, that’s the manufacturer name though.  It’s switchable beyween Virus and Poby, shame as I thought I’d discovered an undumped game.  It’s Puyo Puyo with fashion shoot style pictures of women in the background.  It’s not bad.  One of the ROM labels fell off and I can’t find it.  Annoyed. 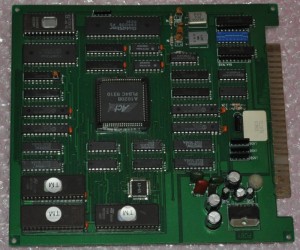 Multi 5 – I found an undumped version 🙂  It’s a Yun-Sung minigames collection, some of them have swimsuit level pictures in the background, I can’t for the life of me see any differences although all the sprite ROMs are different.  Has a minor graphics bug – few sparklies while it warms up. 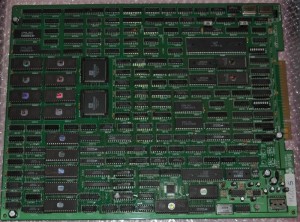 Multi 5 – another one, this one was in MAME though and arrived with a jailbars fault.  Bad LS299 was bad, but when I removed it I found one of the legs was actually bent under the chip instead of being soldered in – probably intermittent so I didn’t give the seller a hard time. 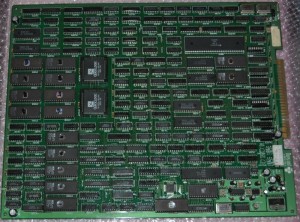 Lup Lup Puzzle – actually got two of these but didn’t bother taking a photo.  One was sold to me as a Super Lup Lup Puzzle, but they’re both just standard (older) revisions.  It’s a Puzz Loop clone with various modes, obviously you can choose to have naked women as backdrops.  Obviously. 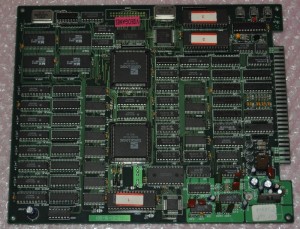 Magix – already had one of these on a larger board variant – this ROM set is tagged as a bootleg in MAME, which is clearly wrong.  Actually bought it because it was advertised as ‘Magic’ and cheap, and I thought it might be another undumped curiosity.  More women and tile matching. 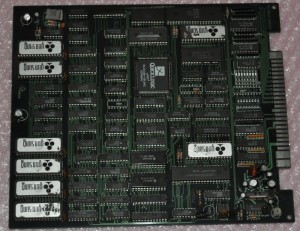 Jump Jump – should be called ‘fall fall’ – platforms scroll upwards and you walk off the edge trying to land on new ones.  Some platforms have special effects like making you bounce, some (because it’s by dgPIX) show you pictures of naked women, some of them quite explicit.  It’s not a very good game, not even much fun.  It’s also not in MAME, I’ll have to look at getting it dumped. 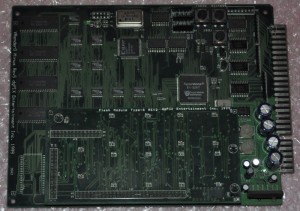 Jungler – Stern version of this much ignored Konami classic.  This is not a small PCB, the heatsink is just REALLY REALLY BIG. 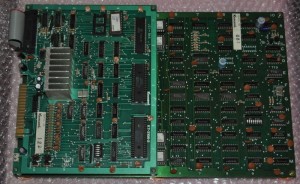 Hatch Catch – cool Semicom game which works sort of like an inverted Puyo clone.  I’d been looking for this for ages, very happy to find it 🙂 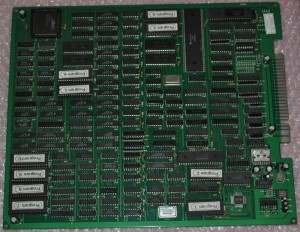 Joe & Mac Return – not bad take on the Bubble Bobble concept with dinosaurs you bash over the head, and then throw at their friends (and other cavemen).  I suppose it feels more like Saboten Bombers than anything else, but SB is better.  Nice non-Korean one and it was a great price. 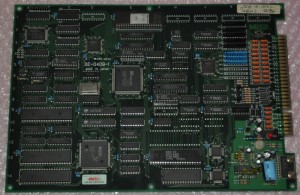 Fantasy ’95 – another Comad porno-Qix game, I think I have all but one of them now.  Found at a retailer I very rarely check, cheap too.  Result! 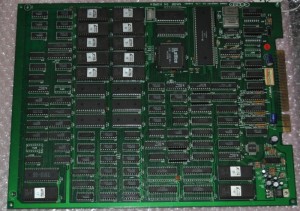 Elfin – this game isn’t in MAME.  It’s by dgPIX so clearly contains pictures of women with no clothes on, but the game is actually pretty good unlike Jump Jump.  It’s a Puzzle Bobble concept, but the gems rotate around a central one based on gravity.  So imagine there are 4 red gems to the left and 4 blue ones to the right, if you fire a red one up the blue ones will swing downwards, making this a very interesting and tricky game to play.  Sometimes I found myself shooting incorrect gems around the side just to balance the mess out and bring ones dangerously close to the bottom, out to the side.  I’ll try to make a video of this, it’s one I’ll have to send away to be dumped but not until I’ve had a bit of fun with it 🙂 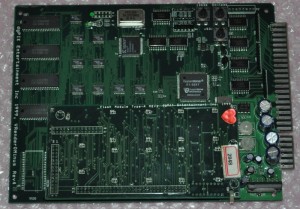 Cannon Ball – another Yun-Sung puzzle game (complete with topless women between rounds), I can’t think of anything this really resembles – short of a Puyo game that lets you match diagonally.  The pattern constantly fills from the top too, so if you’re slow you die as it touches the bottom.  Score enough matches and you get points for the number of gems still on the screen.  PCB isn’t in great shape really, but it works – never do what someone has done with sandpaper to the edge connector.  Just don’t.  I will find you, and I will send ninja to kill you. 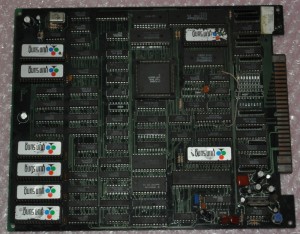 Deluxe 5 – minigames collection by ESD, a couple of them have pictures of women in them (hello Korea!), there’s a bad Pang clone, a Blackjack game I can’t play because I don’t know how, and a fiendishly hard spot the difference game.  This was was an undumped revision, and so was a broken board I got.  All claim to be the same version, very useful…. 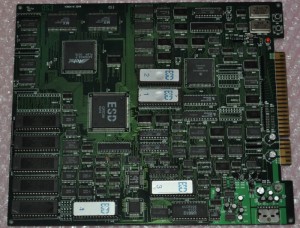