A real rarity or two this time 🙂  Speaking of rare things, I’m looking for a Banbam / Pettan Pyuu PCB, does anyone have one?  Not pictured is a whole stack of art, usually I quietly collect that stuff because taking pictures of it all would take ages (over 400 pieces) – but this month I got hold of an X-Multiply POP.  It’s inflatable.  It came with a stand and instructions too.  Inflatable.

Su Ho Sung – Semicon gambling game, bought this for my Korea collection, and also because it was undumped.  It’s dumped now but I’m waiting for the trojan code so it can be emulated.  I need to replace the remaining brown filter caps, all the blue ones are where brown ones had literally cooked, never seen anything like it before – perhaps someone shorted the board out at some point?  Until I removed the first two it was showing a near short between 5v and GND. 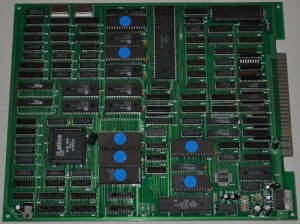 Sankokushi – another ‘adult’ tile matching game, although in this one you need to try to make certain combinations rather than just clear the board, it’s not bad really.  Sold as working on YJP, but it wouldn’t boot 9 times in 10.  Found a bad solder joint on one of the work RAM – someone else had tried to fix this before and made numerous pointless repairs. 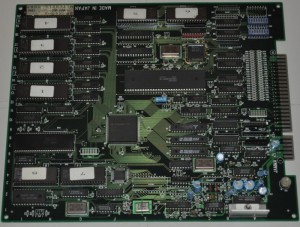 Indiana Jones (and the Temple of Doom) – you don’t see too many of these, this is a Namco built cocktail version of the Atari System 1 boardset.  It’s as heavy and large as a tank, twice as impractical and also very fragile.  These really were designed to sit in board runners in cabinets, the sound amp/etc face downwards on the lower board.  The other option (and the way it came) was to have the connectors all upside down.  On the other hand it’s amazing they condensed the System 1 boardset down to this size and it’s the only real way to play the game in a non-dedicated machine. 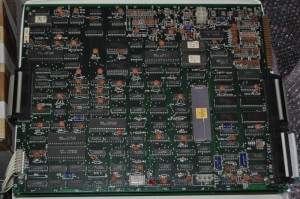 Gogo Mile Smile – newer ROM version, it’s sort of like … Pacman with a tether?  It’s really good fun, you should check it out in MAME.  Also incredibly cheap. 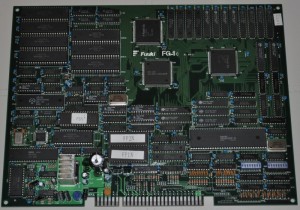 Pacmania – Japanese version, bought to replace my existing set.  When I looked more closely at my existing one though I found out it’s a rare early World proto/location test board which I’ve dumped for MAME, and which is now for sale. 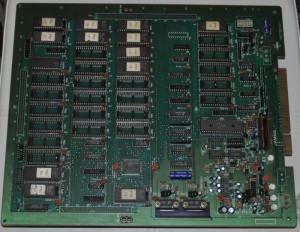 Finest Hour – odd and unfinished feeling scrolling mech shooter from Namco.  It really is like they never had a chance to add the finishing touches, most of the intro is silent for example.  Very expensive game too, Japanese people love their mechs I guess.  I have another of these coming too bought because the art is in mint shape.  The board is allegedly broken, if I fix it that’ll be up for sale sooner or later. 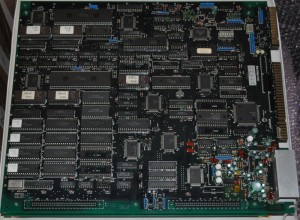 Battle Of Atlantis – it’s cloned Scramble hardware, and the game is more or less a Scramble hack.  I got this on ebay from a French seller, it was sold as working.  Let’s see if I can remember all the faults in one go….  Both AY sound chips were broken, the sound Z80 was corroded and the socket so bad I had to replace it, both of the 8255 interface chips were playing up again due to corrosion (in fact some legs fell off), the DIP switch bank didn’t work resulting in no way to change coin config, the filter cap was crushed and the amplifier physically cracked in half.  That was just the top board.  The lower board needed a couple of TTL chips before the missiles would turn from solid blocks jammed at the top of the screen, into actual missiles. 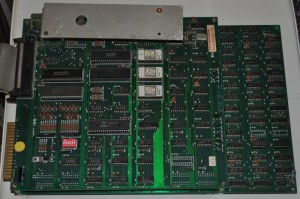 Candory (or Kkandori) – AKA Mario Ponpoko.  It’s a Korean Ponpoko bootleg with graphics ROMs hacked to replace the cat with Mario, and most of the monsters are changed to aliens including ET.  Very strange.  Now dumped for MAME. 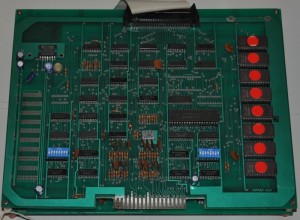 19XX – previously undumped Asia 960104 version, this came with some cool Korean plastic artwork and was amazingly still running on the factory suicide battery (which has now been replaced!)  Needs a new fan, this one makes noises worse than fingernails on a chalkboard. 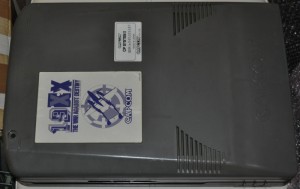