Last PCB haul for the year, and there are some really interesting ones.

UFO Robo Dangar – this one is licensed by Tecfri.  Or was it?  It’s known that Tecfri licensed quite a number of games from various manufacturers, including several from Nichibutsu.  However, while it’s normal to see Tecfri logos as well as ones for the original maker, the Tecfri logos have all been removed from this PCB, even the underside.  Was this once upon a time passed off as a Nichibutsu one, or is it a case that Tecfri didn’t really have permission to make it?  I’ve been told by someone close to the source that Nichibutsu wanted the Tecfri labels removed, but I don’t think we’ll ever know for sure.  Interesting note, this one has a bug which is also common to bootleg boards, some ground sprite priorities get mixed up during play – not sure if it affects Japanese ones too as I can’t find anyone to verify.  The ROMs on this match Dangar set 2, while the bootleg has a different set. 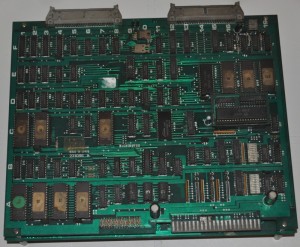 Yam! Yam! – one for the Korea collection, and it turned out to be an undumped version – the probable parent set since the title screen is actually in Korean.  It’s a little puzzle game where you push blocks around.  Cute and inoffensive but nothing special. 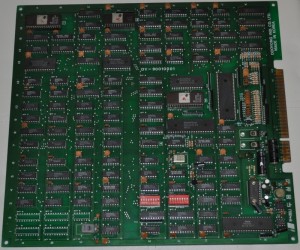 Tetris – a bootleg of some kind, I thought it was undumped to begin with but it was just a bad dump.  The music is absolutely awful.  It’s the same as ‘atetrisb2’ in MAME if you want to endure the suffering.  It was really, really cheap so I had to know… 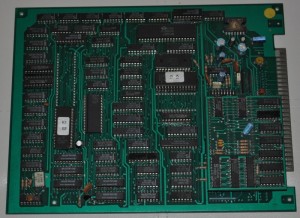 Su Ho Sung – I needed a second one of these to verify a graphical effect/issue on the one I had.  Sure enough it’s normal, I think the picture output on these boards is too strong and it overloads monitors – going to use one of mine to experiment on, it leads to all kinds of tints and weird fades which look wrong compared to MAME.  I’ve seen it on other Semicom boards too. 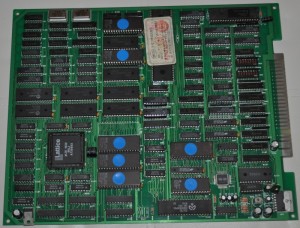 Razion – NGDevs new shooter, it’s actually very nice although I prefer Neo XYX still.  I got the LE kit, preordered it pretty much the day they went up.  My cart is now running an initial bugfix version based on some comments I sent them (one small map bug and a fix for certain MVS boards). 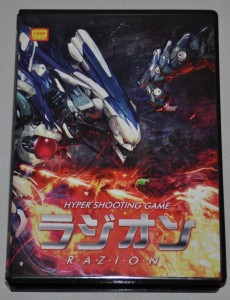 Ninja Emaki – as you can see it’s another Tecfri licensed Nichibutsu version, very rare game these days in any flavour.  On this one proper Tecfri logos are stamped on the underside alongside the Nichibutsu one.  Great music. 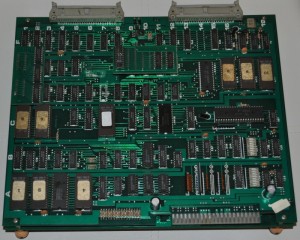 Miss World ’99 – by Eolith, more on this in another post. 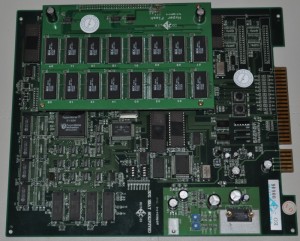 Kaitei Daisensou – being a collector is retarded.  Being a collector is why I sold my perfectly good World version to Spadgy and then spent over twice as much getting this one, which wasn’t in quite as good condition.  I had to clean a lot of flux off the interconnects from where a chimp had reflowed it (pro-tip – when sprites vanish it’s the jumper on the edge every time, not the connectors).  However, this was another puzzle piece in the saga of leaking caps on Irem games.  I had never seen this happen to In The Hunt boards with brown caps, until now.  So yeah it really is EVERY game with brown ELNAs.  This had 3 leaking ones and is now fully recapped. 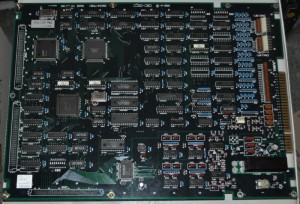 Hot Pinball – another Comad game I didn’t have yet – it’s like Gals Pinball but more revealing and not quite as good, thanks to Brian Troha for the heads up when it hit Ebay.  It was supposed to have graphical faults but I can’t find them, seems perfect.  Success!  Interesting note that the PCB is identical to Gals Pinball, same model number too. 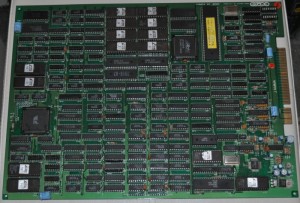 Hatch Catch – it was cheap and I was already buying other games from the seller at the same time.  Will be up for sale shortly, cool puzzle game by Semicom but I have one already. 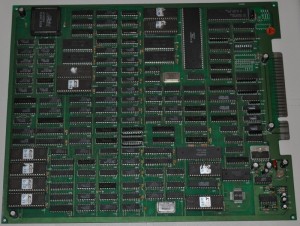 Gunnail – got this .. quite cheaply on ebay Buy It Now.  The seller is known for stock which isn’t perhaps as good as it could be, I suppose that’s why nobody else had rolled the dice already.  Sure enough the sound was toast, but in the end it turned out to be the Macross 2 sound ROM someone had put in there when they replaced the NMK004 sound chip.  I don’t know how that mistake can be made and I especially don’t know how it was able to play sort of reasonable sounding tunes with the wrong code.  It was fine when I put the right ROM in.  It’s a proper Japanese one too (like my keeper), rare as it gets these days.  Already with its new owner, this was spoken for before it even arrived at my house. 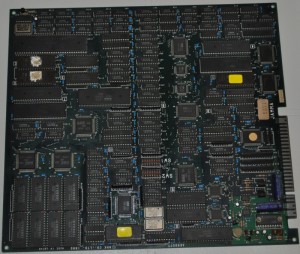 Gunbird 2 – I like Gunbird games.  I do need to replace the Gunbird 1 I traded for Air Assault though, good trade.  This came with original artwork, price not too bad either. 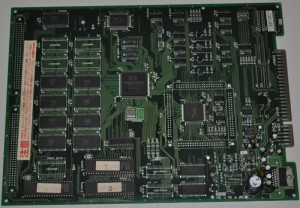 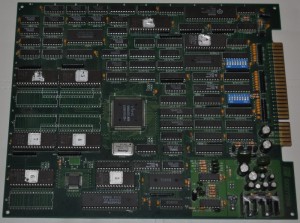 Goindol – a bootleg Goindol, part of my SuNA stockpiling operation, I’m trying to gather as much reference material as I can for desuicide/decrypt attempts to start on this hardware now that batteries are dropping like flies. 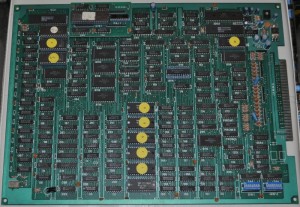 D-Day – very rare and until now undumped version of The Last Day by Dooyong.  It’s a fairly unspectacular shooter but with an unusually high bullet speed.  Not bad really but it’s no R-Shark. 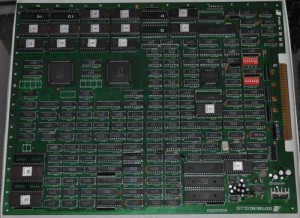