Haven’t written about non-arcade games that much recently, to be honest I thought 2014 was a pretty bad year overall.  Lots of broken games, some even worse examples of DLC and in-game currency sales, remakes as far as the eye can see.  It was cynical, depressing, indicative of a sick industry which is creaking under the weight of production values.  There were a few gems – the Final Fantasy XIV PS4 client, Sherlock Holmes, Wolfenstein TNO and a bit later in the year – a goblin restored a little of my faith in games. 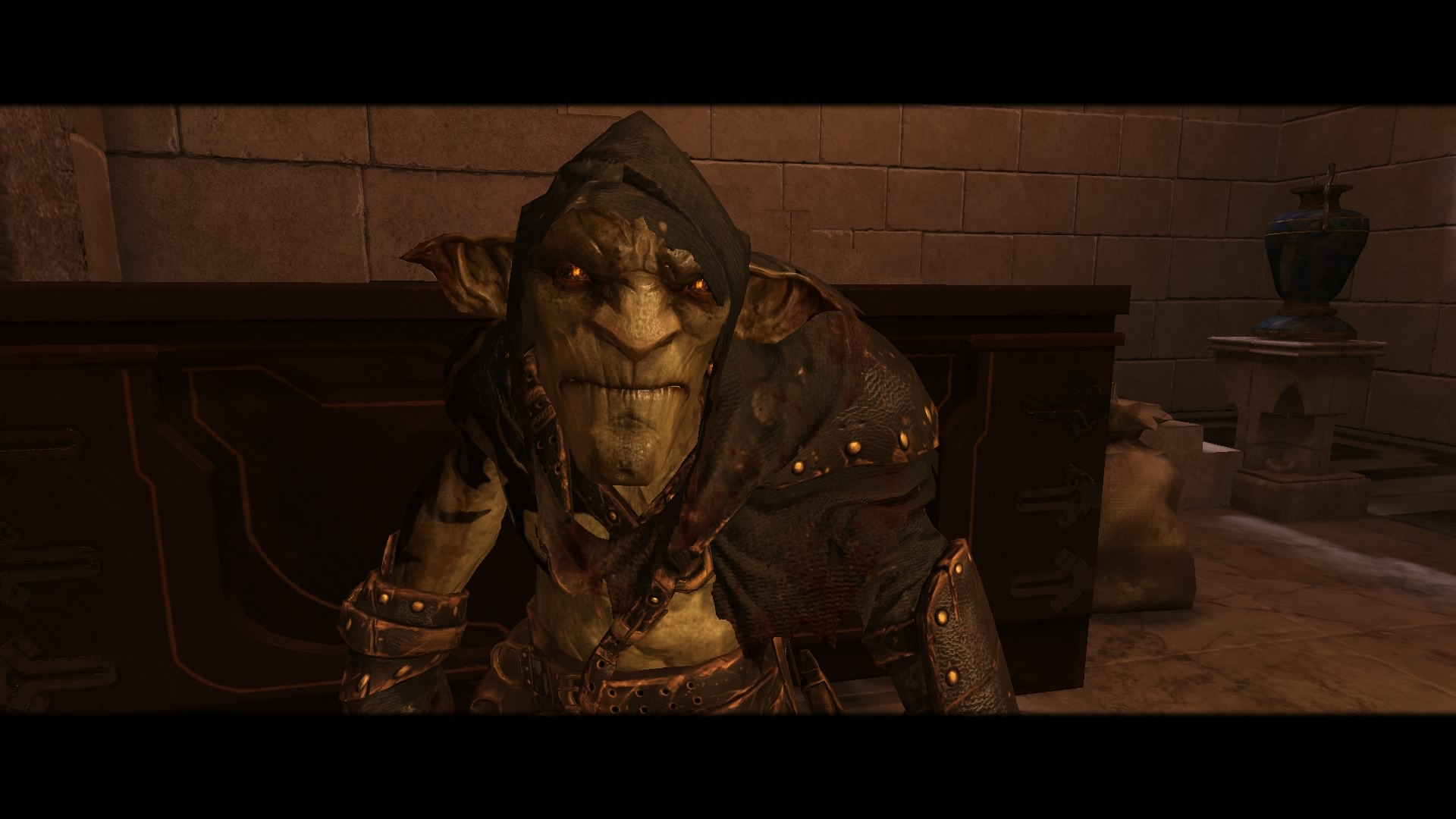 Styx is like a game from another time.  If you remember the original Tenchu games you’ll be in familiar territory, it’s stealth platforming in its purest form.  Styx is a .. troubled goblin, he has a headache and a desire to reach the heart of the world tree for reasons he can’t even recall.  The story is actually much better than I expected, I’m not going to say too much for fear of spoiling it.  It’s set in the Tower Of Akenash, a vast sprawling labyrinth of a place where humans and elves have an uneasy allience harvesting amber from the tree, a liquid which gives Styx and the elves most of their power while also serving as an addictive drug for humans. 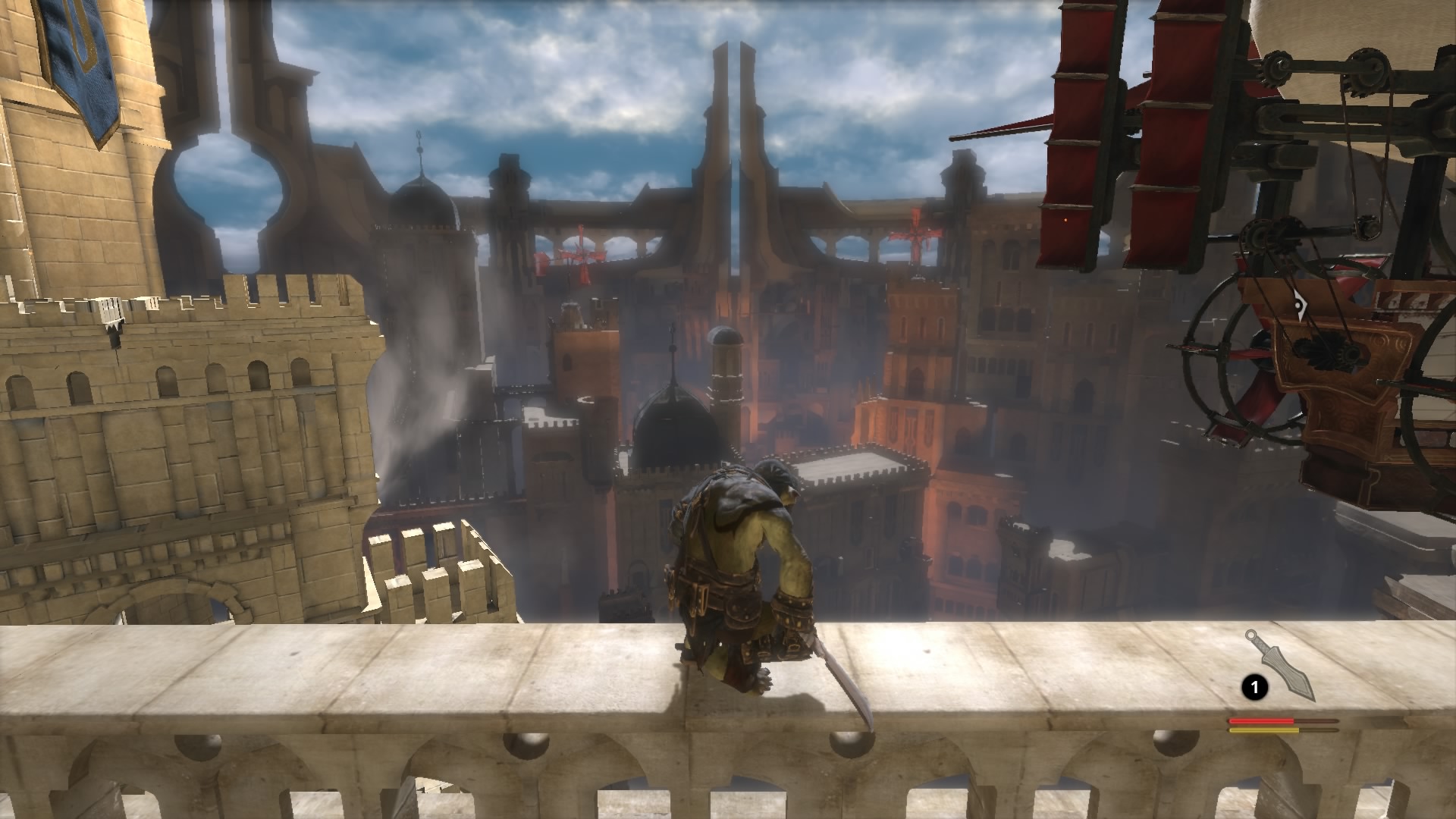 To reach the heart you’ll need to work your way through numerous levels (which tend to get re-used from half way through the game), grouped into chapters in-between which you can restock in Styx’s hideout.  Each level simply gives you a goal (sometimes with optional side missions) and drops you right in to make your own way through. 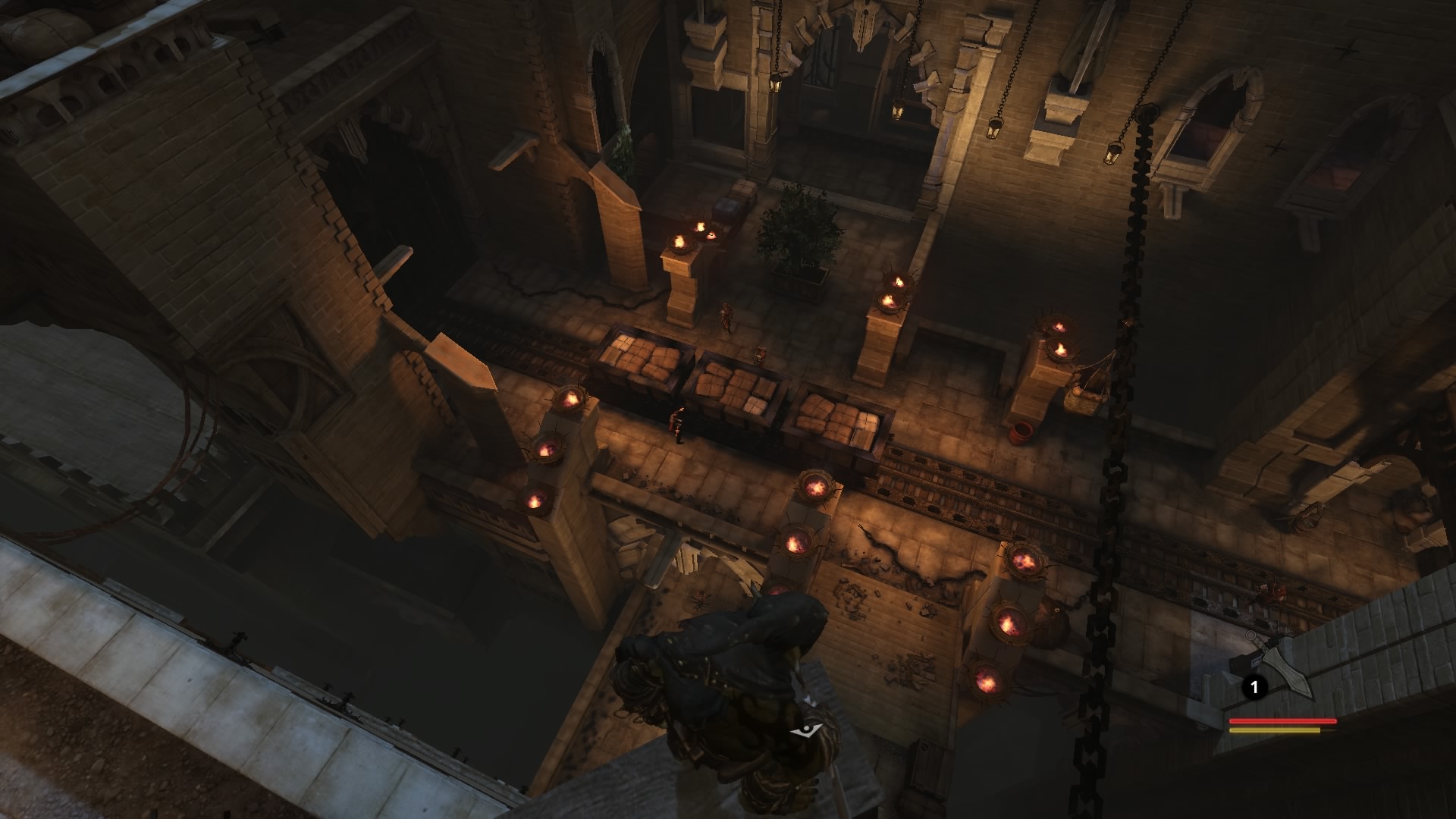 Each chapter also has coins scattered through the levels and a relic hidden in one of them which you’ll have to find based on map clues.  Collecting these as well as approaching levels in certain ways, for example without killing anyone or without being detected at all will give you points at the end of the chapter.  These points can be used in the hideout to upgrade Styx in various areas from killing techniques to equipment capacity.  Each area has 4 possible upgrades, completing these starts to unlock the most powerful upgrades, but it’s unlikely you’ll be able to unlock the entire skill tree on your first play.  You won’t be able to abuse the skills too much either, most abilities consume amber and vials are few and far between. 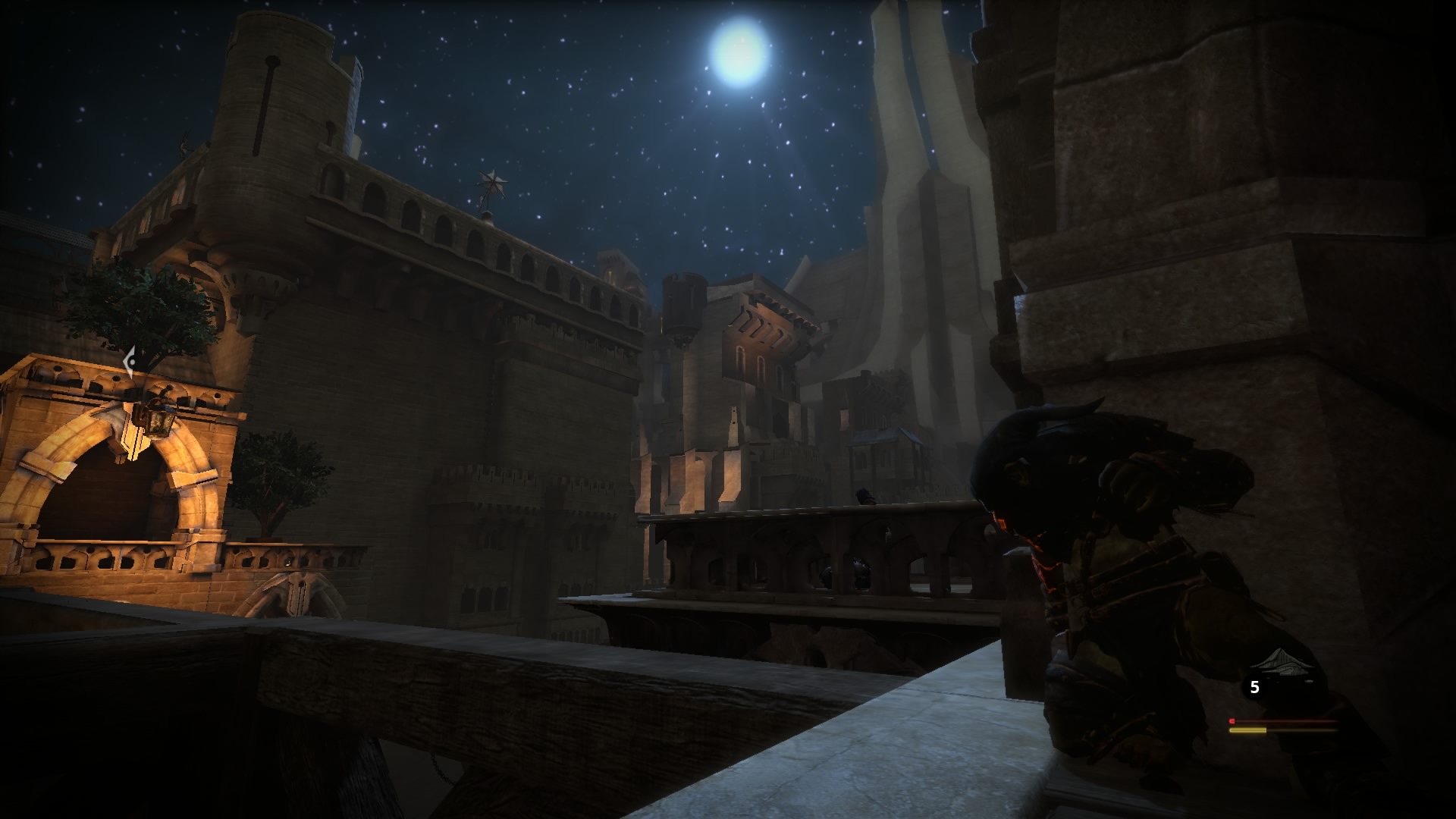 What really makes the game work is the freedom on offer.  Even faced with the simplest situation of one guard in a room, you could walk up and attack head on (not advised), you could distract or bind him with a clone, drop from a rafter for an aerial kill, sneak around the outside of the room in the shadows for a stealth kill, throw a dagger at him, poison nearby food in the hope that he’ll eat it, drop a chandalier on his head – the options are varied. 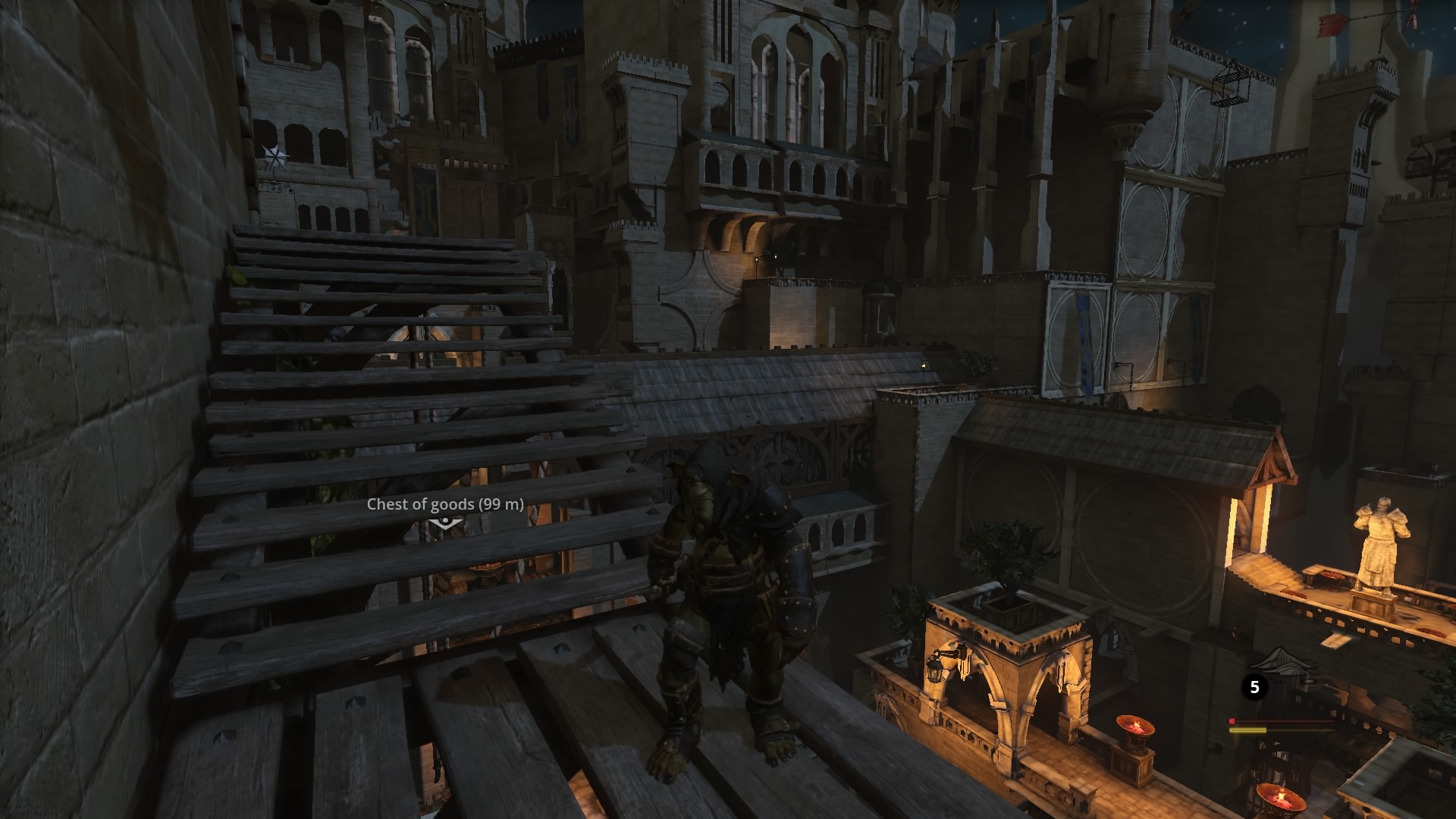 You really do need to avoid straight up fights at all costs though since Styx can only take a few hits even on default difficulty.  Elite bowmen will kill you in a single bolt even if you’re mid-fight with a guard, knights and elves will kill you instantly, some enemies are immune to daggers and so on.  Of course where there’s a will there’s a way, and you can be quite inventive.

The enemy AI is pretty good if not spectacular – if guards see movement they might just be alerted, a bit more and they’ll come and investigate.  If you’re seen any nearby enemies will be called to alert too and the ease of which Styx can be killed means that in this situation you’ll want to just escape until the heat is off.  Turning invisible is a good way (which consumes a lot of amber), climbing is another, and there are numerous crawl spaces you can run for.  Guards also go on alert when discovering dead bodies so it’s a good idea to hide them in dark corners, drop them into the abyss, dissolve them with acid or find a nice empty cupboard – unless you want them to be found of course.  I found slowly emptying areas and piling the bodies up to be quite effective.  Styx is a very troubled goblin after all. 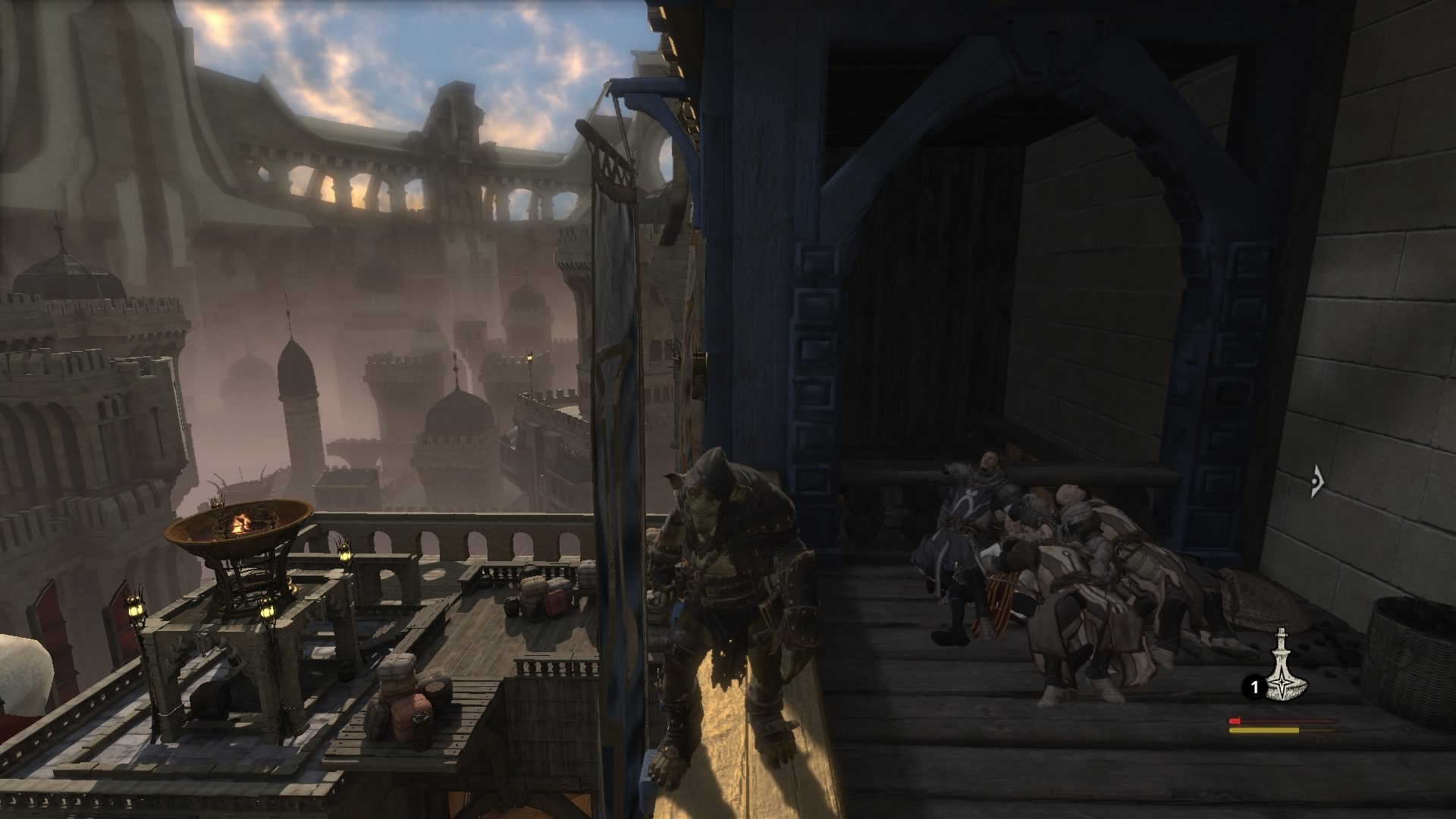 The level layouts really are superb with few forced routes or choke points – each one is huge and multi layered, in some areas you can almost get a feeling of vertigo hopping around tiny platforms on the outside of a tower.  Fortunately the controls and ‘stickiness’ of Styx are just about perfect – if you’re generally accurate then you can move around the levels quickly, but if you’re in a rush or get a little too ambitious you can expect to fall.  Too far and you’ll take damage or die instantly – assuming there’s a floor at all. 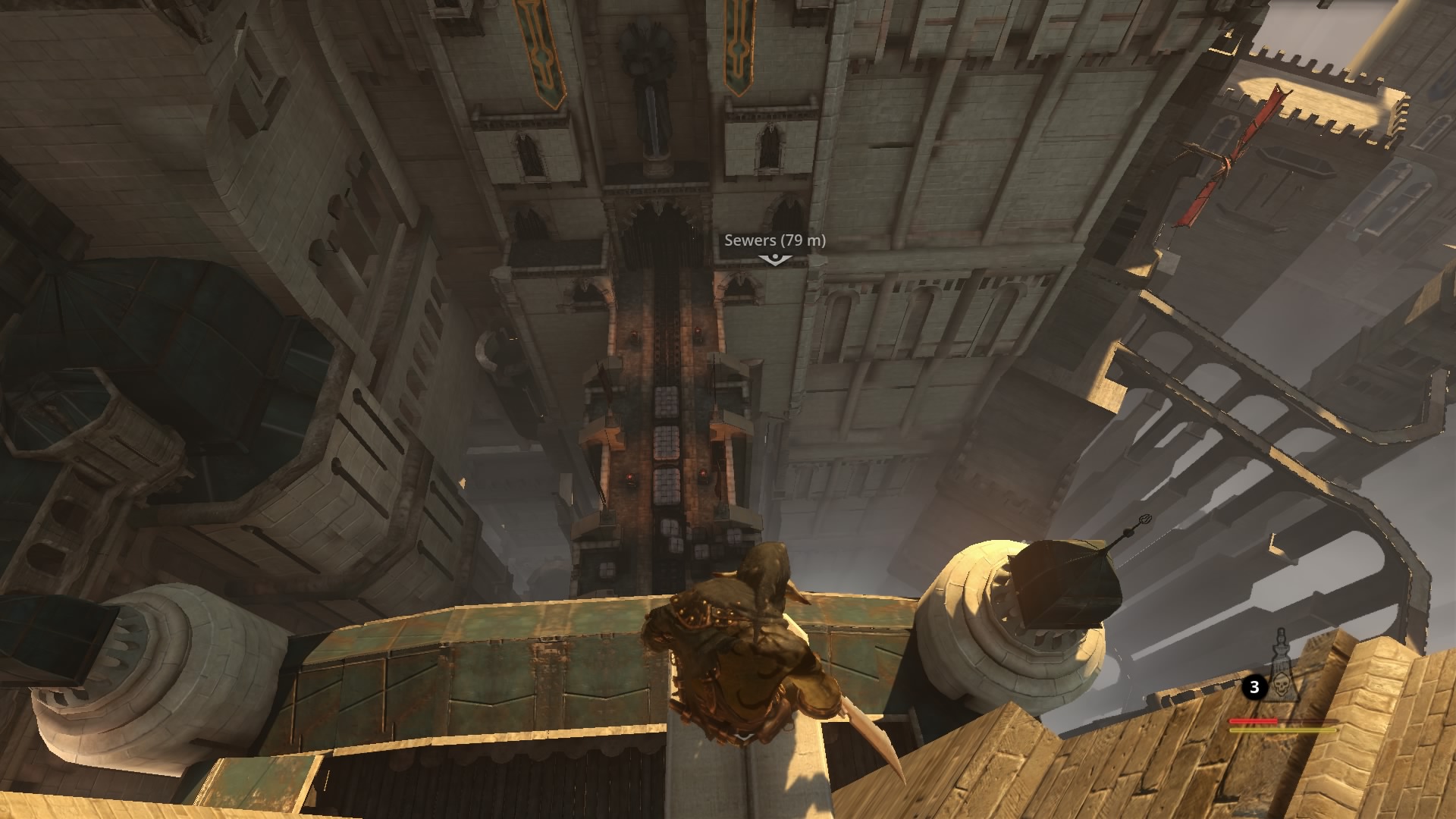 Overall I’d say Styx on the PS4 is a nice looking game, we’re in 30fps territory – sometimes the engine can get bogged down but it’s infrequent, there’s an odd texture loading glitch when you spin the camera quickly which can lead to some colour errors but in normal play you rarely see it.  It’s an overwhelmingly dark game of course being set mostly in the shadows, but the developers added enough light areas to give some relief and contrast.  Audio is excellent with atmospheric music (individual musicians getting credit at the end is nice to see) and good voice acting for Styx, while some of the guards can be a little comical at times – a personal favourite was when one found a body I’d carelessly left out in the open and shouted ‘What the fuck is this madness?’ 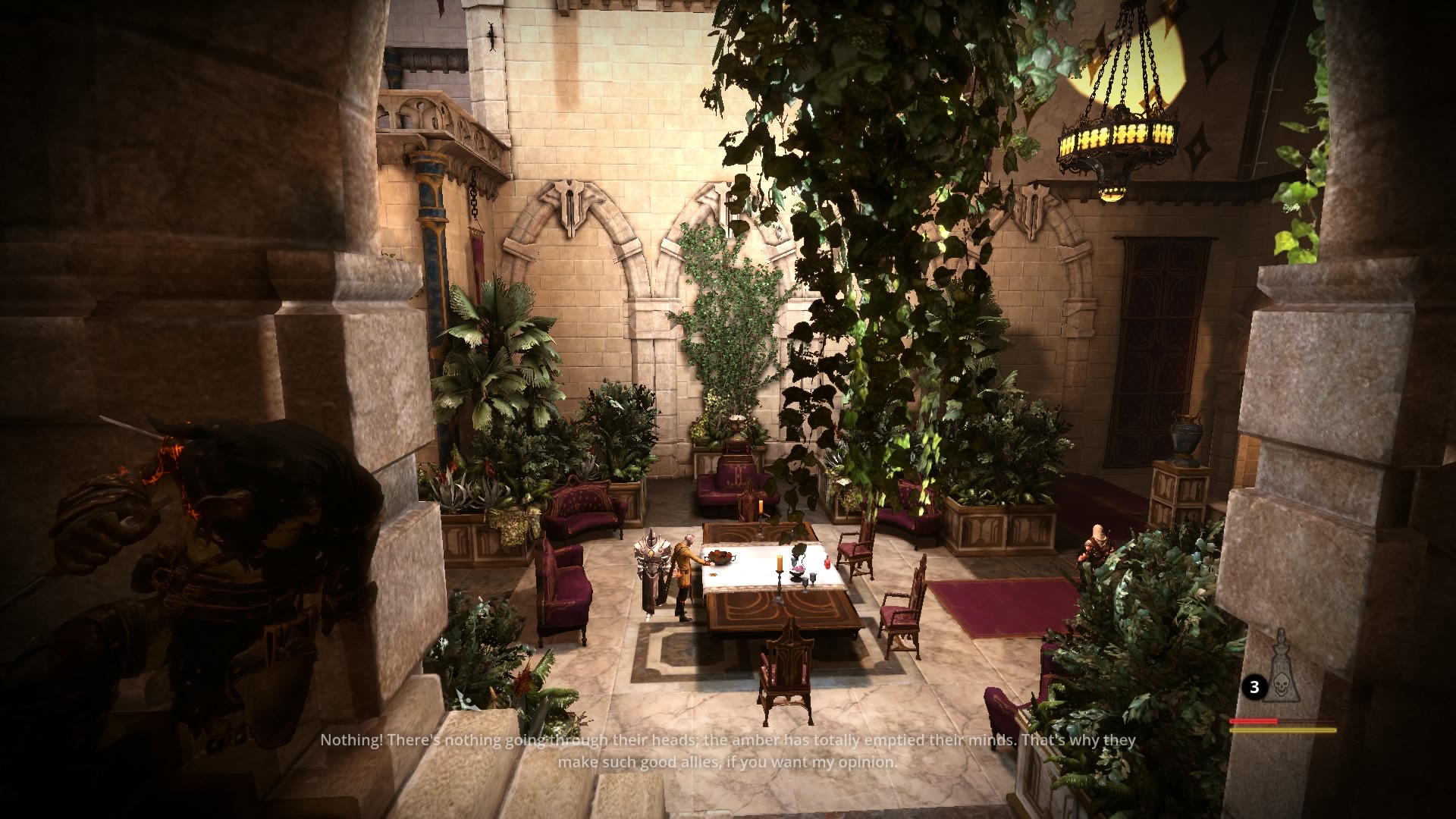 Problems?  A couple – a few times I did have it hang, but we’re talking two over the course of the entire campaign and thankfully it didn’t crash the entire system.  Autosaves are few and far between and quite often you’ll get engrossed in creeping around solving a area, only to die and find yourself a long, long way back.  Fortunately you can save at any time, but it doesn’t make the slow loading time between deaths any more enjoyable, and you will die a lot.  The AI can (rarely) break leading to individual soldiers just standing there until you walk within attack range or stranded at scenery they don’t know how to navigate.

Overall though, if you like stealth platforming you simply can’t go wrong here.  It’s the exact opposite of the mainstream gaming experience at the moment and I’d put it alongside Sherlock Holmes as one of the stand-out titles of 2014 which dared to just make the game they wanted without needing to appeal to everyone.  Something different.  Something that does what it says for a reasonable price.  Something that works.  Something I enjoyed.

It’s available on PS4, Xbox One and PC – and for some reason gaming media seems to be totally unaware of it.