Things.  Many things.  Sheer number of PCBs in the house now becoming a problem, the large number sat here for sale isn’t helping much either.  I should really take a few photos of the art I’ve picked up lately too, there have been some really awesome finds.

Vigilante – bought to dump, now sitting on three of these for sale again as part of the ‘find all ROM versions’ project.  We’re just missing revision F now, this is World C. 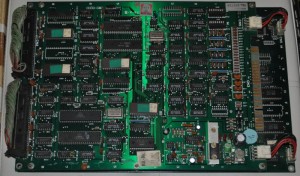 Super Miss World – yet another previously unknown Comad game uncovered!  It’s another variant on their Gals Panic clone game, what else?  This one is really cheesy, there’s a picture of an elated man and child between rounds as celebration, it’s very soft (not even topless), I’m starting to hope this really is the last one.  Give me more Super Ducks.  It’ll be in MAME soon. 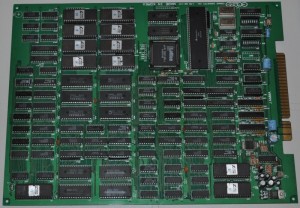 Side Arms – finally have a Japanese one, which means my old board is up for sale now, which turned out to be an undumped revision!  Pro-tip, if you don’t like Side Arms there’s something wrong with you, this game is a solid classic. 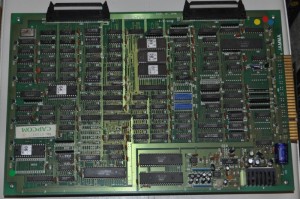 Runark – foolishly replacing my perfectly good Growl PCB with a problematic 2 layer Japanese F2, because collecting.  It’s worth credit feeding Runark at least once just so you can get to the elephant vs clown tank section, it’s amazing. 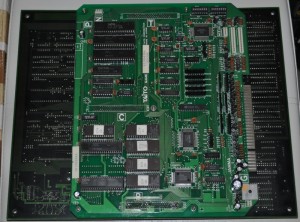 Robocop – another ‘upgrading collection’ purchase, Japanese version which seems somewhat uncommon.  This game and Black Tiger are what got me into arcade collecting in the first place, Robocop is one of the best ever.  Side note: iast has been speedrunning this, the recording is up on Twitch somewhere. 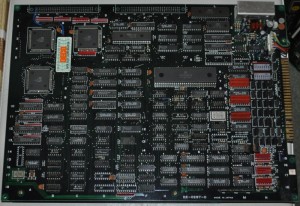 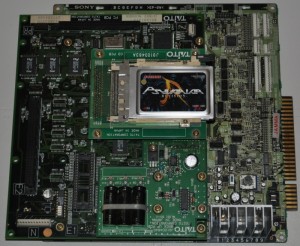 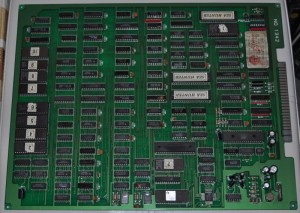 NebulasRay – you may have seen the repair post for this one, another SMT cap game which suffers leakage, I’m glad I got to it early.  Also, pay attention to the photo, now that I’ve actually seen a real one myself, I realise one that’s been doing the rounds recently on the forums is actually a conversion, not just a re-region.  That single chip ROM riser should be present. 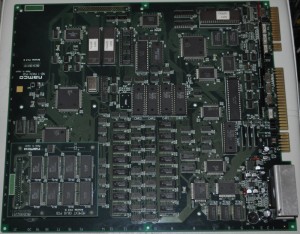 Moon Patrol – some time ago I posted with much jubilation, that I finally had an Irem Moon Patrol.  I didn’t, turns out it was a clone which had some original parts loaded onto it, making things fairly deceptive.  Possibly even a very lazy repair job.  This, finally, is an actual Irem Moon Patrol.  Taking this one to my grave.  Decade long search finally, definitively over. 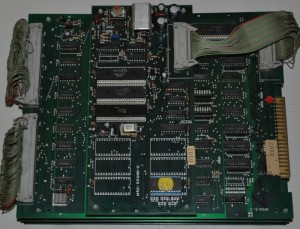 Metal Black – Japanese 2 layer one but with an interestingly small CPU board.  It’s a variant I haven’t seen before which doesn’t suffer the sound hiss on amplified setups which is common with the large board type.  Came with full original art, nice! 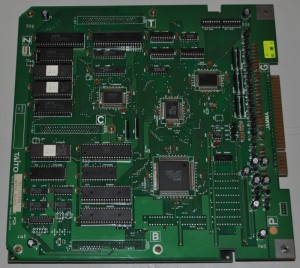 Let’s Dance – dgPIX actually cloned DDR, this was amazing and unexpected when we noticed it on ebay.  It’ll be a little while before I can get this dumped, NINE surface mounted flash ROMs to remove.  That’s a stack of money in chip-quick alone.  Arrived with a fault but fortunately I was able to locate it, note extra pin header which apparently would control a set of lamps on the machine. 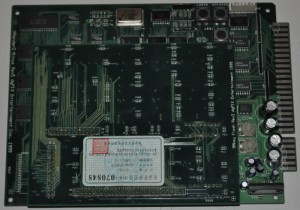 Fishing Maniac – another undumped dgPIX game, with fishing.  It’s not very good at all.  More SMTs to desolder… 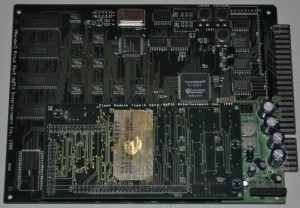 Beat Player 2000 – yet more SMTs to desolder…  Not content with cloning DDR, they cloned Beatmania too, I can’t tell if it’s any good or not because the controls are near impossible mapped to the joystick and buttons in an odd pattern, the music is pretty poor though.  I’ll try to put videos of these up soon. 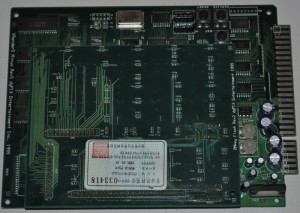 DoDonPachi – a hole in the collection for too long.  Very clean board, pleased with this one.  Wish I’d kept one from back when they cost $95 from Cosmic, good times. 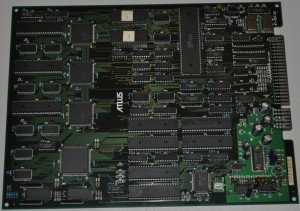