A couple of long term hunted games in here, and a bit of luck.

Wolf Fang: Kuhga 2001 – Japanese version of Wolf Fang with the story and level select.  This came in a box which was … not strong enough at all (total junk in fact) but luckily it was undamaged.  I suppose I can sell my world one now. 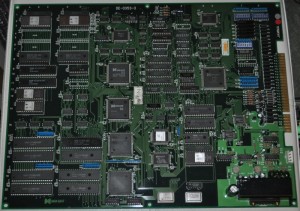 Super Zaxxon – now this is rare.  Really rare.  Unfortunately it was the other game in the box with Wolf Fang, and it bore the brunt of the damage.  The top mini layer was skewed out of position and all the long connect pins were bent and twisted out of place.  This in turn had forced the middle layer to bend pretty badly.  It took 20 minutes to straighten out the damage, and luckily it does still work.  I have a question mark on some of the colour strength but that’s probably unrelated to the squashing.  A couple of caps will need replacing too.  Never ship one of these unless the box is heavy duty.  Back to the game, it’s a bastard hard version of Zaxxon which never really saw mainstream popularity.  And yes, the board really is that big. 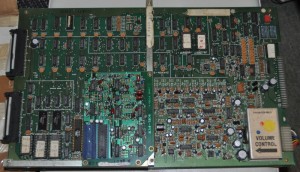 Violent Storm – Japanese one (with art) to replace my Asia board which will be up for sale soon.  Konamis answer to Capcom side brawlers and honestly it’s just as good, if not better than most of them.  This game plays like an absolute dream, everything is so fluid and the graphics/music are top class. 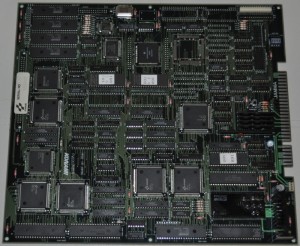 Thunderjaws – terrible Atari Rolling Thunder style game.  It’s amazing how clunky it feels to play, at this point in Atari’s gaming history, a lot of their games felt like this.  Sort of cumbersome and mechanical feeling.  Cool sharks though and unintentionally very funny. 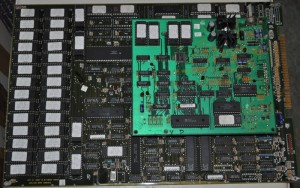 Puzzlove – another impossibly rare game by Para(dise of Amusement).  I’d read somewhere that a lot of Silver Millennium were converted to this but that must be the other rom set if true, since this previously undumped Korean rev is simply a different physical board. 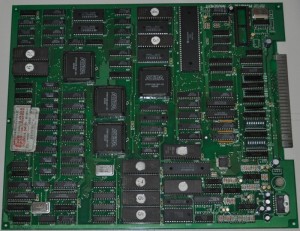 Ninja Clowns – this had been on my wanted list for so long.  So very long.  It’s a dreadful game and feels sort of like Thunderjaws in a way, maybe all American companies lost their way by this point.  In fact this might be one of the worst games ever despite the nice graphics in places.  Zero points to the seller who faced with a blown fuse, wrapped a strand of wire around it.  No, it didn’t work when I first tried it. 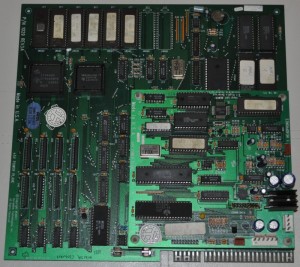 Battle Garegga – Chinese version someone has ROM swapped to Japan.  I bought this as faulty and used it to study the “won’t boot on a lot of cabs” problem.  Sure enough it didn’t.  Fix is now documented on this blog and nonbooting Gareggas should become a thing of the past as people apply the correction.  I also replaced a couple of resistors someone had cut off to disable the sound output filtering (why..?), put in the bolts on the amp which Chinese boards usually lack, and replaced the snipped wire links and original 2-way dip with a 4-way so it can be easily swapped between versions.  Hoping to get the original ROMs from the previous owner too, I actually like China ver. 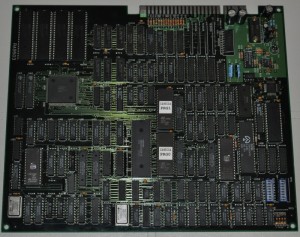