Well, time for the last PCB spam of the year.  I think I’m going to have to finally give in and start storing some of the less valuable stuff that I don’t use in the garage, with the boxes in huge ziplock bags for protection.  The garage is full of course, held up by the fact that I’m GIVING arcade machines away and people won’t actually .. collect them.

Wonder League Star – a baseball game by Semicom, that I didn’t own yet.  I have no idea how to play it, all in Korean and I don’t actually know how baseball works either… 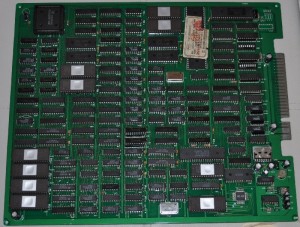 USAAF Mustang – sold to me as having a sound fault, and it’s all fixed now but there are a few points to make.  Firstly, it’s a World sold board, but the ROMs are identical to Japan, it IS original but it was assembled in Korea.  Secondly, if you don’t know how to at least make an educated guess about faults then please don’t try to fix them.  I had to do a bit of tidying up of someone else’s repair work, refit the correct capacitors and so on, luckily I had my JP one to compare with.  Thirdly, if you’re going to sell NEW working OKI sound chips, don’t send people a tray of busted ones.  The reason it has a jumper wire now to an OKI is one of the pads gave up when I removed the second replacement in a row.  Eventually I put one in salvaged from a Bad Dudes with broken graphics.  Worked perfectly then… 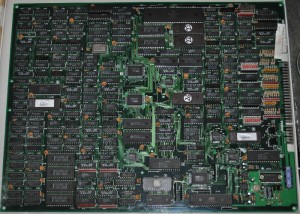 Steel Force – strange Spanish overhead sci-fi maze shooter, it reminds me a bit of an Amiga game in style, Alien Breed for example.  Pretty obscure, not brilliant – the time limit stops you looking around at all the detail in the stages. 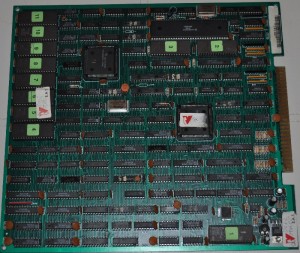 Tourvision + 3 games – this time we have Son Son II, Dragon Spirit and Daisenpu.  If you don’t know, this is literally a PC Engine motherboard stripped and fitted to a timer based cart system.  Pretty sure they didn’t have a license to do this and there’s no WAY they had a license for the 80 or so games we’ve discovered so far.  I’ve got a crate of carts coming in early next year which will all get dumped and added to MAME, but it’s worth noting they’re all so far identical to the normal PCE carts.  Nice to have RGB PC Engine gaming in a cab though.  If you remember to keep the coins topped up anyway… 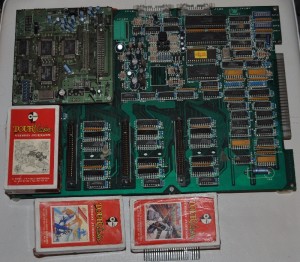 Ninja Kids – it was cheap and I wanted to cut the postage down on Devil World, really that’s why I bought it.  It was sold at working but arrived with graphics faults and damaged audio capacitors as a result of shitty packaging.  It’s all good now, I’ll be selling it.  NK is a decent enough game but the style doesn’t appeal to me. 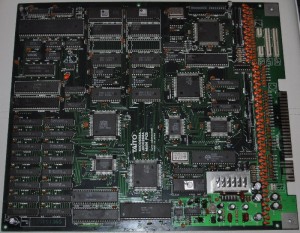 Miss World ’96 (set B) – for a long time based on an operator manual, it’s been expected that different picture sets exist for at least some Comad games, from A to C with A being the naked stuff and C being swimsuits.  Finally proven this to be true, since this appears to have some different pictures to the sets in MAME, and has a C-3000B sticker, while my old one has C-3000A.  I’ve dumped it. 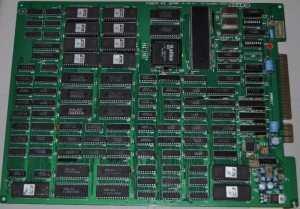 Mister & Miss World – Comad, again with the exact same game and minor changes.  This one is somewhat unique in that it offers men or women to uncover.  Another game sold as working but wasn’t – graphical issue affecting text colours and effects but after quite a while spent diagnosing, it’s fixed now. 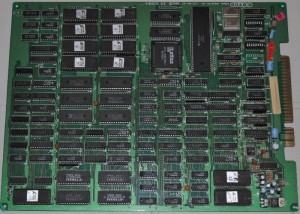 Las Vegas Girl – arrived broken due to socket corrosion…  It’s sort of like Columns, a bit, but with a 10 second long music loop.  Actually the game itself isn’t too bad but suffers from taking a very, very long time to get going.  I should see if it can be dipped to hard mode. 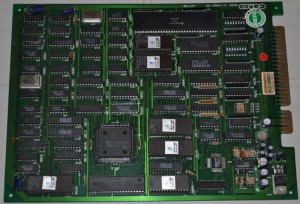 Glass – well this one is unusual.  Glass is a sort of screen shooter / clearing game by Gaelco (with women and men), and normally you’d expect to see a plastic cover in the middle containing a Dallas security chip and a battery, since they all suicide.  This one appears to be made for the Korean market and licensed to Promat, the girl pictures have been changed to anime ones and the introduction women between rounds are censored.  On normal versions that’s dip controlled, on this it was totally disabled.  Of course the really obviously strange thing is the security stuff is totally missing, never been populated. 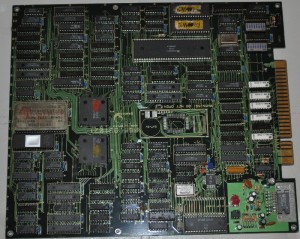 Glass (1.1) – and here’s why the above discovery was so important.  This is a normal Glass PCB, version 1.1 which the Korean one was based on.  While it appeared to be working, actually in-game some strange things were happening with sprite location and wrong bits of the screen being cleared.  Using the Korean ROMs to bypass the security, it showed the suicide has begun since the game then ran perfectly.  The security is complex on these and hooks into all manner of routines, so a corrupted SRAM attached to the Dallas can cause all kinds of strange errors.  You can desuicide these by just dropping the Korean ROMs in but you have to change the chip with the girl graphics and accept censorship too.  Or at least you did, until Haze hacked the Korean set to re-enable the dip and allow use of the standard picture ROMs 🙂  Sadly 1.0 may end up being lost to time unless people are doing successful battery swaps.  My attempt failed, don’t even disconnect it while under power. 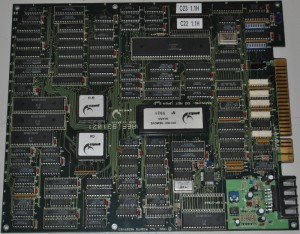 Hard Head 2 (bootleg) – well, I need to have some way to play the game when my SuNA one inevitably suicides.  It seems like nobody is going to defeat those security blocks anytime soon..  This plays/looks/sounds perfect compared to the normal PCB, unsurprising since aside from the replaced protection area, the board is a straight clone.  I got two of these actually, I’m hoping there may be some way to read the MCU they’ve used. 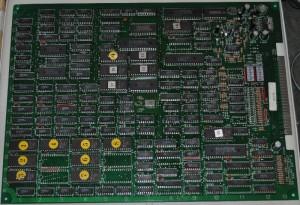 Devil World – Konami decided they wanted a slice of Gauntlet pie.  Known as Majuu no Ohkoku in Japan and Dark Adventure in the US, it’s a slightly glitchy odd game to play but I really like it for some reason.  They’re getting hard to find due to people converting them into Vulcan Venture now,  I picked this up for a fantastic price, it sure as hell isn’t getting converted.  The US version actually supports 3 players and has many more stages, but it does this through repetition. 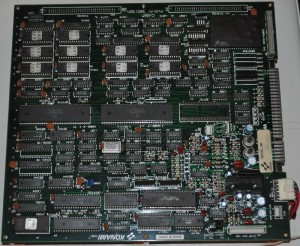 Double Dragon 2 (bootleg) – big, ugly, and I bought it purely to dump.  It’s for sale cheap now, the actual game is just like a real one including audio for a change. 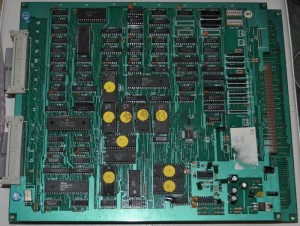 Carket Ball – by Semicom, my existing one was a ROM swap repair using one of the Cookie & Bibi games, I bought this to replace it.  It’s a video pool game with poker elements and some decent presentation, but the ball physics feel dead.  Real Break still king in this genre. 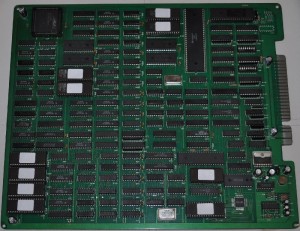 Acrobat Mission – this was my Christmas present to myself, I’ve been really getting into this game on MAME and wanted to play it on the cab instead 🙂  Gameplay is slightly weird, graphics are slightly weird, audio is very weird but pretty catchy with it – and it’s full of little UPL related bonus items if you can work out how to trigger them.  I’ve found secrets hidden all over the place including a little Robo-kid which appears from an asteroid and jets off the screen unless you grab him for points quickly. 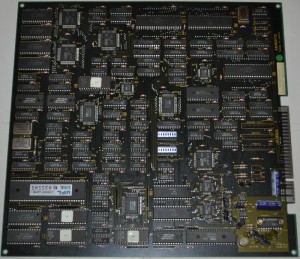 Baby Dream – I saved the most interesting for last, this is a Mr Driller clone with babies in it, including a terrifying animated intro with ugly smiling baby faces.  The air meter is replaced with a baby bottle, it’s very strange and very Korean.  I’ve had to order a different type of ROM adapter to be able to dump this.  Seems to play well enough. 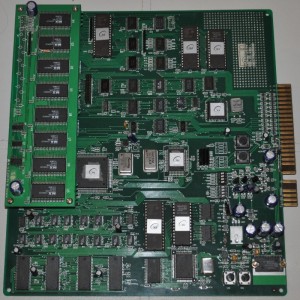