Yeah, not much to say about this other than my credit card is on fire.  Much of the wanted list got scrubbed with this pile of games – not sure where I’m going to store them yet…..  I usually just upload these in whatever order, today because there are so many, let’s go alphabetically.

Atomic Point – kind of interesting game from Philko, it’s Tetris but each stage is a puzzle, you need to clear any lines with flashing dots in them, the shape bin comes pre-filled in annoying ways.  I didn’t know this existed until I saw it on someones sale list. 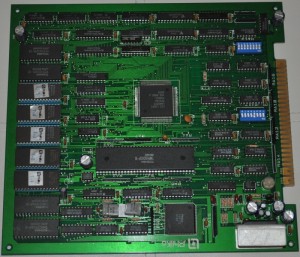 B.Rap Boys – Vastly superior sequel to DJ Boy, this one is the normal version, the Special version is even better.  Should be possible to make some ROMs to play it, looks simple enough from the set data in MAME.  Hint: get the stick, keep the stick, love the stick. 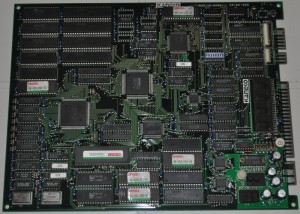 Daimakaimura – on the wanted list for a while, I saw this listed on UKVAC and it’s in absolutely fantastic original condition, and with things the way they are these days, a pretty good price.  I would like to blame Aquas for this expenditure. 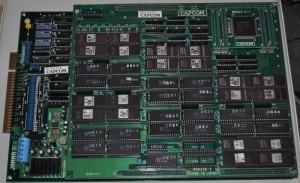 Doreamon – TourVision cart, this cost way too much given that it’s a single cart with a normal PCE HU-Card in the case – but it needed dumping….  I also picked up a box for Winning Shot, and these came with a corroded TourVision motherboard which still works – it can be salvaged, but the seller sent me a cleaner one too! 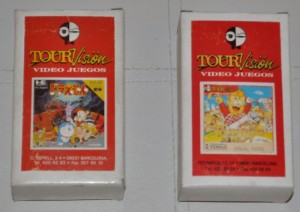 Dynamite Duke – sort of sequel or continuation from Seibus earlier Cabal style games.  We’re in the present day now and along with the normal crosshair shooting this game turns the MANLY GAME FOR MEN dial to 11 by letting you actually fight enemies who run up close with kicks and super punches.  You can even punch so hard tanks are vapourised.  It’s really hard to find, but not too expensive if you do. 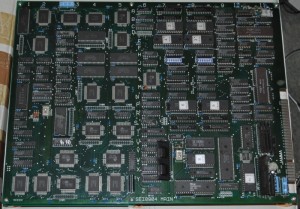 Elevator Action Returns – as well as being a sucker for prohibition era games, I’m also really into anything with a 60s/70s style spy soundtrack, just what I grew up with.  EAR has an amazing soundtrack and it’s a really worthy followup to the original game. 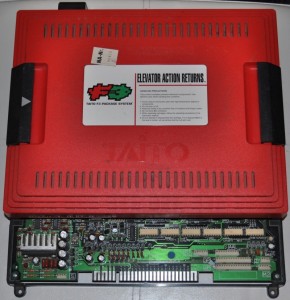 Football Champ – it was free.  I bought something else and they put it in there as a gift.  That’s how worthless JAMMA football games are.  Please buy it. 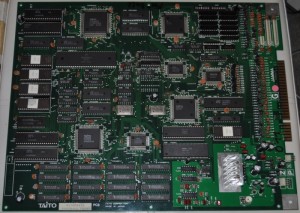 J.J. Squawkers – extremely rare and incredibly awesome platformer from Able / Athena.  Cats are assholes, they blow up your house and your only recourse as a crow is to rampage through the game world throwing tomatoes and pumpkins at people and taking insane amounts of drugs.  Cost a fortune, sold as faulty but thankfully there was nothing actually wrong with it that couldn’t be fixed by turning the debug dip off. 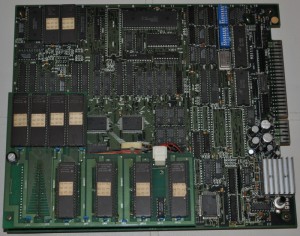 Lead Angle – known as Dead Angle in the west (and Gang Hunter in Spain), this is the sequel to Empire City 1931, they tried to make it a little more playable by showing your character and letting you dodge the attacks, but honestly I think the first game is more fun due to the simplicity.  I still need a Japanese Taito version of that, does anyone have one? 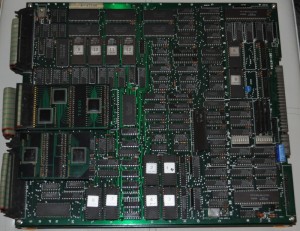 Legionnaire – bought this to dump as the Japanese set was missing from MAME, strangely it looks like a Korean one re-regioned, but there’s a Tecmo label (only present on Japanese boards) and it’s got correct OTP ROMs on it minus the labels.  ‘Made in Japan’ has been covered up with pen, I think this is a refugee from the time where people in Korea were importing games from Japan, which was illegal for a while. 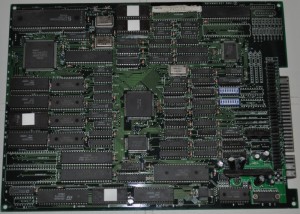 Lord Of King – or as the west knows it, The Astyanax.  Came with a P-47 ROM board too which is undumped (more on that soon), and one of the input customs was broken as they always are on Megasys PCBs.  If you get one of these and the sound seems corrupt, this is normal – check MAME.  Certain effects like the skeletons being killed seem to not cut off where they should.  I quite like this game, it has a lot of interesting ideas! 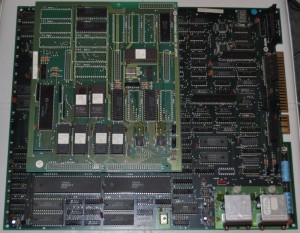 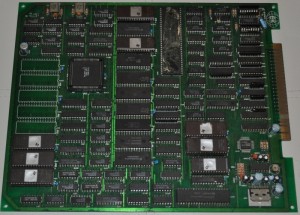 Nova 2001 – bought this because it was better condition than the one I had (intact labels) and it also came with … a NOS POP!  Condition of that isn’t perfect, something has been spilled on it, but it’s an interesting item and actually has the enemies and point values printed on it.  Fantastic game, you can play this on PS4 now in the Arcade Archives series. 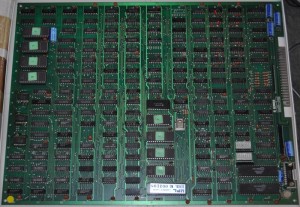 Penfan Girls – I bought this because I thought there might be a sound problem with my old one which was dumped for MAME.  There isn’t, the little pips at the end of sounds are normal.  It’s a jigsaw puzzle game with anime pics, pretty good actually but feels a bit unfinished in presentation.  Selling one of them now. 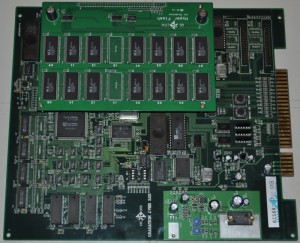 Ping Pong – I’ve been after one of these for ages!  It was a favourite on the ZX Spectrum and plays just as well on the PCB.  It also amazingly came with serial matching artwork, manual, and panel stickers.  Word of note the pinout is nearly Konami standard but not quite, the controls will be scrambled unless you make a specific adapter. 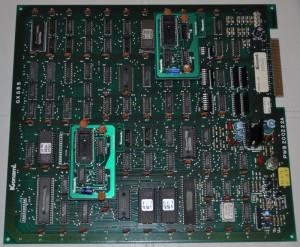 Pretty Soldier Sailor Moon – again with my love/hate relationship on this game.  It cost far too much, the condition isn’t great, and when I got it I found the labels have been replaced putting the genuine JP description into question.  It came from the same person as the Legionnaire re-import, and given that the EEPROM hasn’t been tampered with and the serial number is very low, it could very well be a similar situation.  Also Sailor Mars FTW. 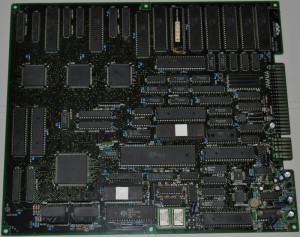 Sand Scorpion – everyone loves this game after Trap15’s STGT!  The slowdown is actually marginally worse on hardware than in MAME.  It was sold with a sound fault which was tracked to the little custom module next to the amp.  I’ll trace out the old one soon so people can make replacements in future. 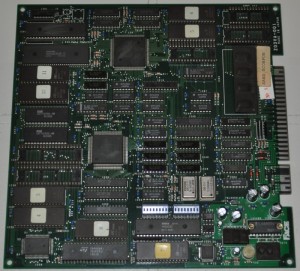 Secret Agent – super rare Japanese version, I needed this … to go with the artwork.  If anyone wants a normal US one (turned out to be undumped) then it’s on my sale list.  Great game, again the cool music does it for me but it’s nowhere near as good as the Amiga version soundtrack done by Tim Follin. 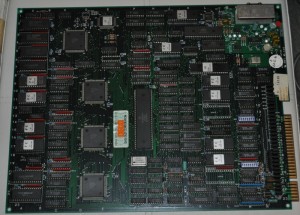 Sen Jing – Japanese version of Guardian Storm, it’s one of the better Afega shmups.  Turns out the input circuits from the factory are a bad design, and they made an extra JAMMA adapter to correct it, on a JAMMA game…  Seems just changing the resistor packs would have been cheaper. 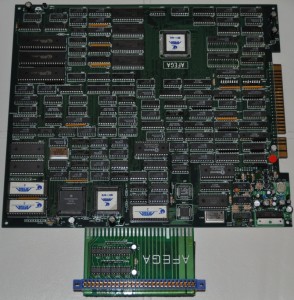 Sonic Boom – kind of old fashioned shmup from Sega on System 16, it’s really hard to find and the baseboard on mine is from Golden Axe.  The music is really unusual, stage 2 is an experimental mess in places.  Really feels like a game released 2 years too late. 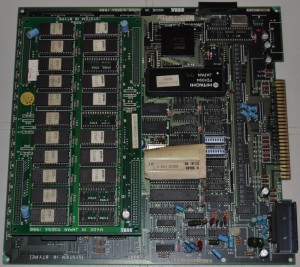 Strider – early US rev meaning the stage 3 music is wrong (easily remedied by swapping one chip).  I love this game, I want a Japanese one, but they go for eye watering prices. 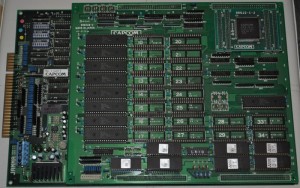 Terra Force – Another Nichibutsu game collected.  Great game with a mixture of vertical and horizontal sections which you can access through holes in the floor and ceiling.  It’s also got brilliant crunchy YM3812 synth music which was typical of Nichibutsu as soon as they switched away from games using YM2203.  Go hunting around on Youtube for music from this, Armed-F, Legion and so on – love it! 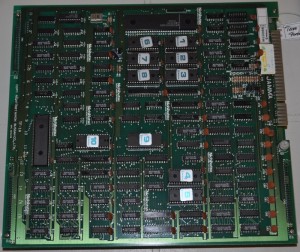 Toride II – Tiles.  Women.  Stripping.  Lewd animations.  It’s all here and it’s all in German due to where I sourced the PCB. 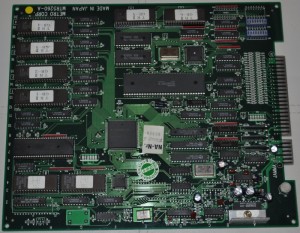 Touche Me – more bad adult games?  Actually this one isn’t too bad – it has a rabbit who doesn’t look like Roger Rabbit trying to strip a lady who doesn’t look like Jessica Rabbit, by running around a maze painting it.  It’s got strangely good music and a lot of tunes, but you’ll want to play the older set in MAME rather than this which I’ve dumped, because that one allows you to continue mazes with lives – this resets the whole stage.  The AI is also interesting, it’s dumb as rocks but can switch to random which makes things very difficult. 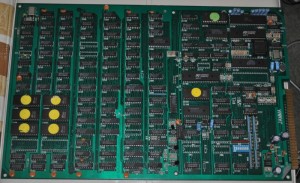 Zero Zone – Comad.  It’s Las Vegas Girl with a different name and plain tiles, plus the pictures are always in full view instead of flashing when you match 7’s.  LVG is the better of the two, but they’re both a bit slow to get going.  Not many left on the Comad list now, in fact that might be all of them! 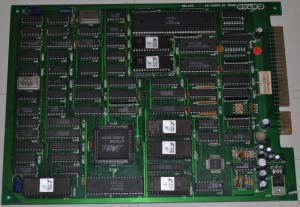