A small mixture of stuff this time, one of them very rare and I’m pleased to finally find it. 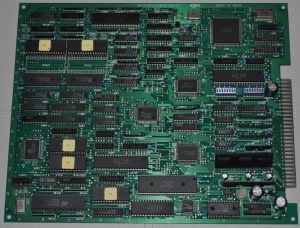 Pirates – finally, an actual non-conversion Pirates PCB with original labels.  This one is incredibly rare to the point where I wasn’t sure if they exist, a lucky ebay find. 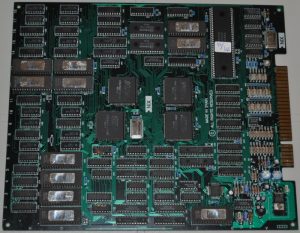 Tokyo Gal Zukan – fairly generic Nichibutsu Mahjong game, I quite like the music though.  Interesting board, lacks standard Nichibtsu stickers, note the unique layout and the label with SAMPLE BOARD in the corner.  Did this game actually get a full release or get abandoned in location test? 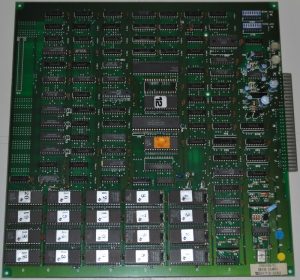 Ojousan – early Nichibutsu game which fits in the gap between the really primitive ones and the established formula they went with in later years.  The sound is a little sparse but the graphics are quite cute and not the typical Nichibutsu style most people are familiar with. 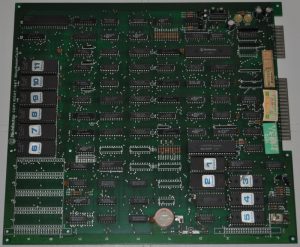 Nyan Nyan Panic – Pengo with cats.  Seems to be a factory conversion of City Bomber.  Original ROMs are soldered in, and many of the unpopulated areas actually have pins on the underside – the chips having been very neatly cut off right at the PCB level.  It’s possible it was never actually a finished City Bomber, since the steering control logic and connector are missing, and have never been fitted.  The serial number is very close to my City Bomber one however. 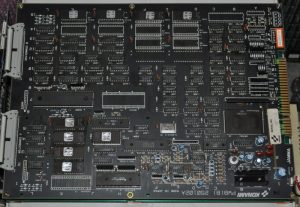 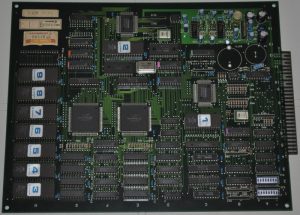 Gals Pinball – bought this to upgrade the one I had which has some ugly repair work, but this one doesn’t run quite as well – minor graphical hiccups when pop bumpers are being hit.  Glitchy things like that are very common on Comad hardware, it’s the luck of the draw.   As far as video pinball goes, both of the Comad ones are ‘ok’, but crammed full of topless women of course. 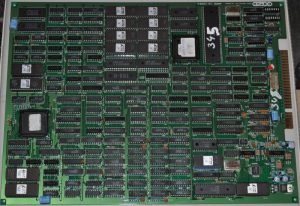 Funny Strip – another upgrade.  Nice shape PCB, the game itself is a very decent Pac-Man clone with some extremely tame stripping (until suddenly you get greyscale digitised sex…..)  The AI isn’t quite as obnoxious as real Pac-Man which actually makes it a lot more fun to play. 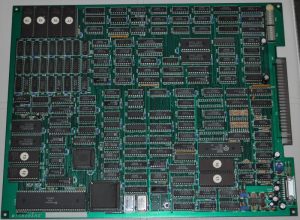 Fishing Maniac 2 – coming to MAME soon (translation: eventually.)  It’s complete rubbish, just like 1 & 3 are.  Bought purely to dump, one interesting feature of this game though is the protection PAL which you usually find on the ROM board of dgPIX games, is an empty socket on this one. 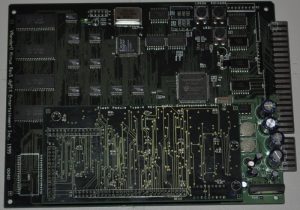