I’ve seen this on three different boards now, and it turns out that certain families of Nichibutsu Mahjong hardware can have problems with colour bleeding and minor visual glitches.  For example Club 90’s and The Lady Hunter both suffer from this, here’s what a Lady Hunter PCB looks like: 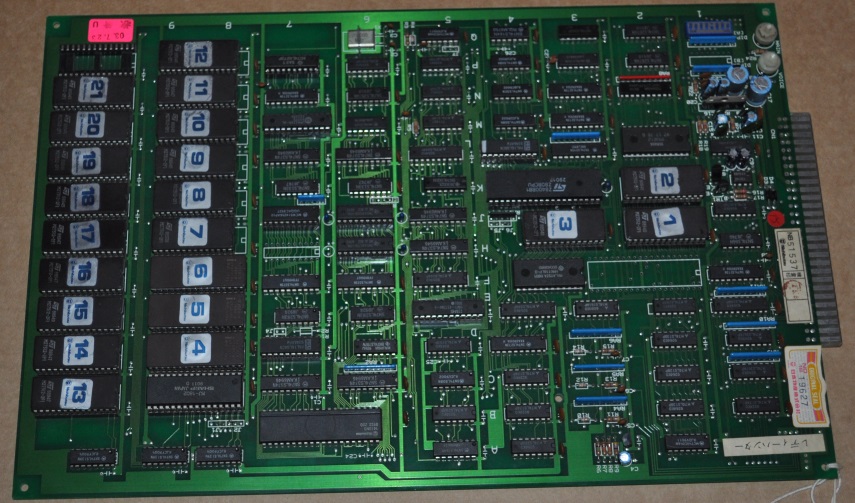 The bleeding usually manifests itself as colour fringing to the right of some top player graphics, in the below screenshot you can see a blue fringe to the right of the black border text box.  In some cases it can appear to be red fringing and in others it can appear to be an absence of red.  In other instances you can actually see colour problems to the left of graphics for example reds degrading and looking ‘sparkly’ similar to a RAM fault 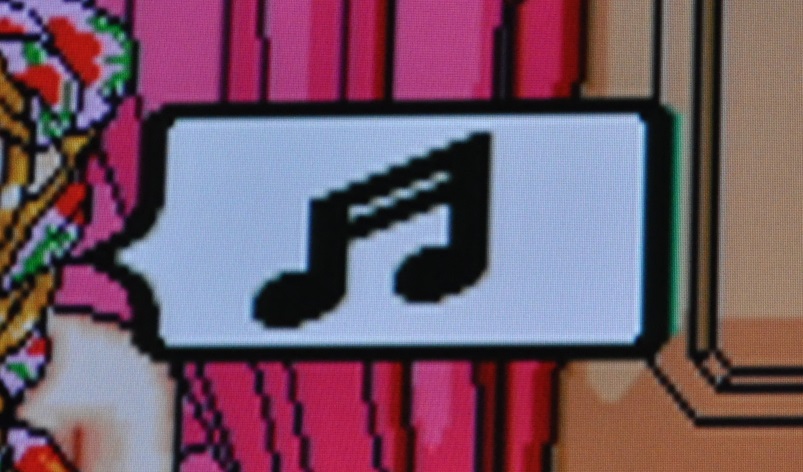 If you look at the right side of the black border around the large 0, you can see the blue fringes affecting only certain other colours to the right, so it seems like it only affects certain bit depths. 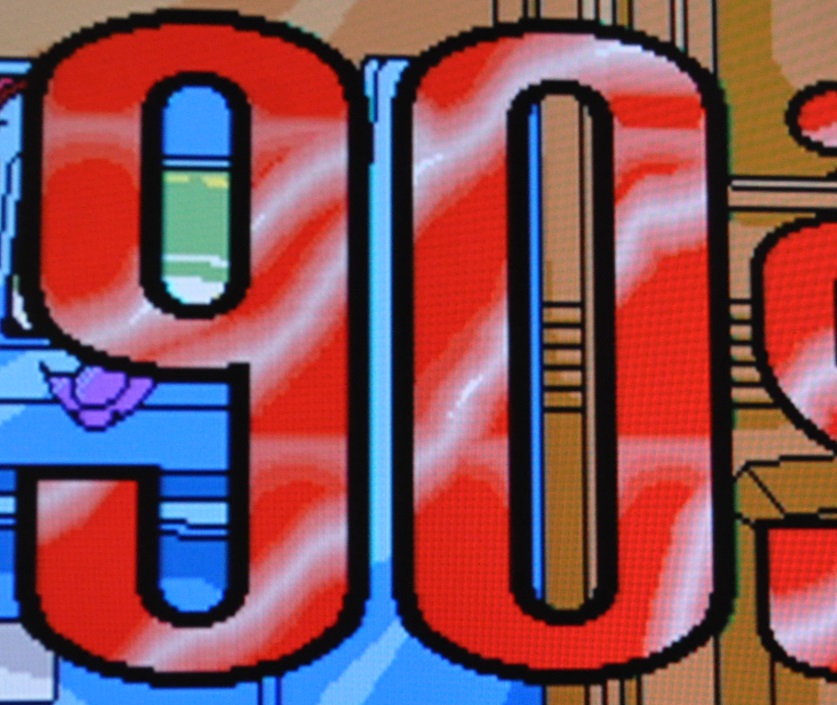 A final example from the same title screen, we can see that the company logo is fringing on every right-hand edge.

So why does this happen?  Well in many cases Mahjong hardware is hardly top of the line, they’re made to a budget and in some areas it shows.  I’ve seen minor graphical artifacts you wouldn’t expect from a polished arcade game in many titles and on many types hardware, usually tearing or flickering.

In this instance refer to the first PCB screenshot above and look at chip positions 3B to 3D, you will see three resistor packs and associated components which form the analogue picture output.  The pack closest the edge of the board is for the red channel.  The red and green are fed by one clock circuit, with the red going through two extra flip-flops, while the blue is fed by another.  The drivers for these clock signals are chips 5p and 5N below.

Unfortunately this cheap and cheerful hardware suffers from being extremely sensitive to the speed of these two 74LS74s.  A problem with the one in 5p seems to mostly cause odd pixel glitches particularly in fast top layer draws – for example the smoke cloud part of the attract sequence in Lady Hunter.  As for the two games which had colour fringing, these were both caused by the chip in 5N. 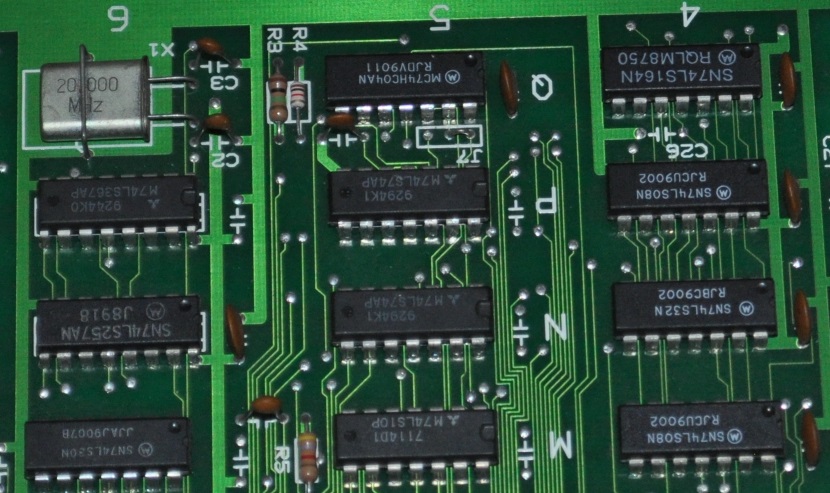 The solution seems to be to simply replace them with other types.  For colour fringing issues caused by 5N, I suggest substituting a 74S74 which is a faster chip.  on a Lady Hunter with pixel glitching I found that substituting 5p for a different brand of 74LS74 was actually better than using a 74S74, while Club 90’s is now flawless fitted with two of the faster variants.  If you’re still getting pixel glitching after replacing these, a final ‘adjustment’ you can make is to populate C26 with a low value ceramic capacitor, 10pf for example totally cleared up another Club 90’s. 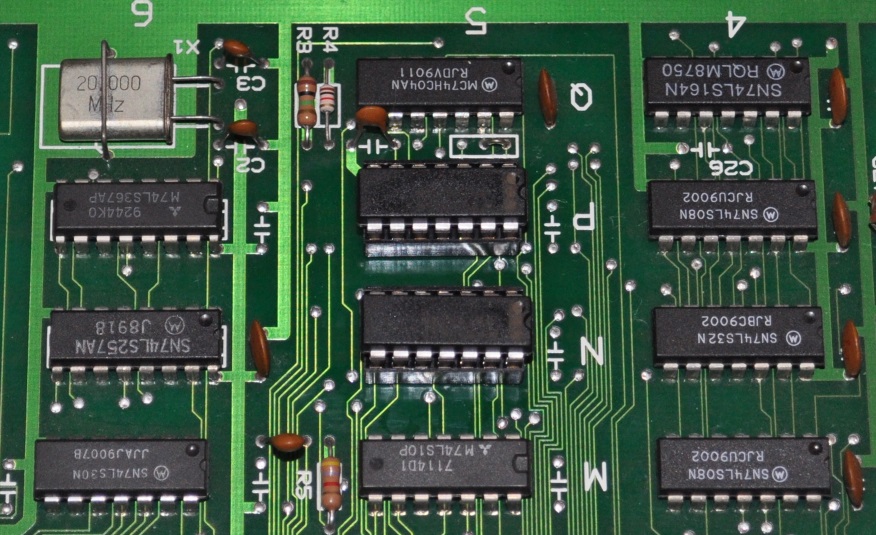 You can see the blue fringe is gone, apologies for the moire effect, I’m getting very bad at taking photographs of TV screens 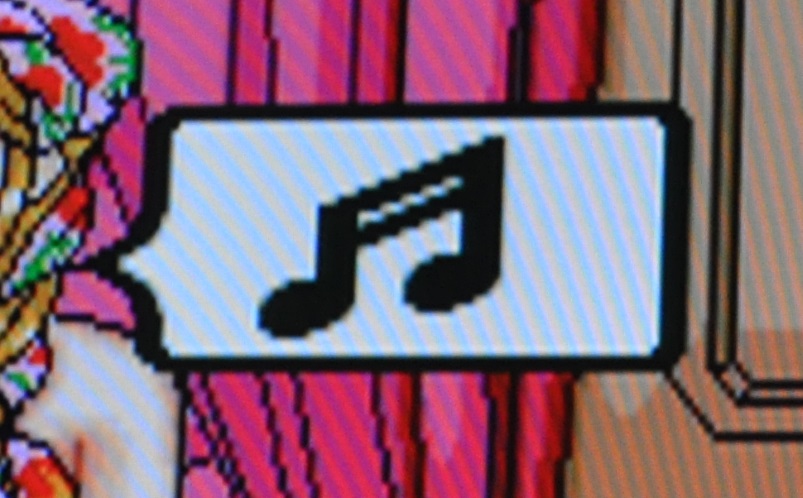 And again on the big logo, the intermittent blue fringe is now gone. 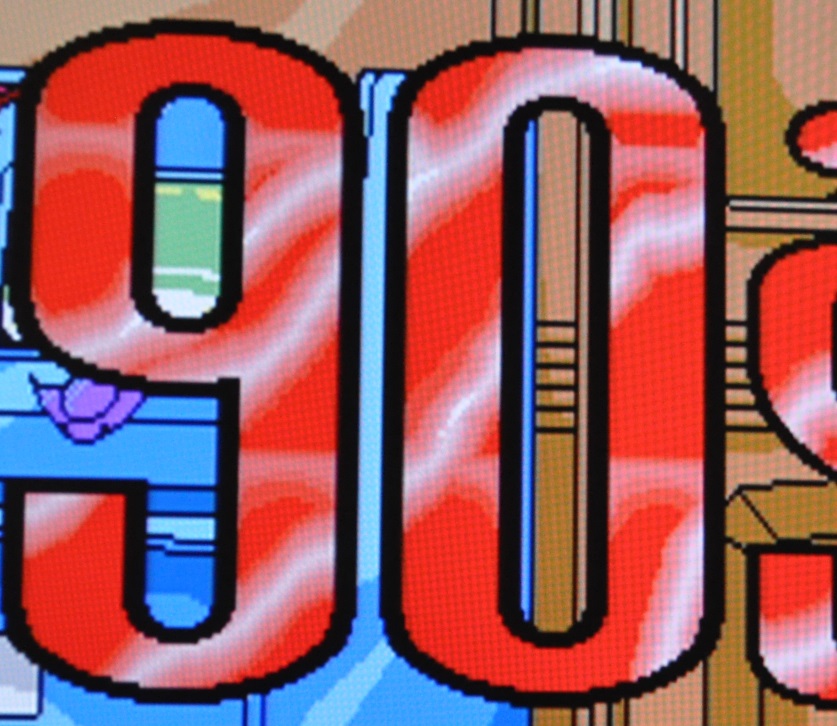 These games left the factory like this, there’s no doubt about it.  Nichibutsu probably knew about this but it simply wasn’t worth fixing urgently, especially since the fringing is almost invisible on small CRTs.  The majority of Mahjong cabinets used in Japan are cocktail table type with screens of 20″ or less, so this wouldn’t have really bothered players much, and operators even less.  Of course on a large modern display or even worse a large LCD TV, the glitches become more apparent.

On later hardware, the problem simply doesn’t exist.  In fact it’s a fairly narrow band of games affected by this problem, but it wasted a lot of my time when I noticed and looked into a repair.  That said many of the earlier boards suffer from sensitivity to brand of RAM used, again exhibiting visual artifacts.  I suspect this is another example of simply running things too close to the wire since in those cases simply putting in a faster RAM always resolves the problem.