Some moderately interesting games in this next batch, you’ll have to excuse minimal descriptions as I’m not able to type properly at the moment and using speech recognition.  Getting old is the worst thing in the world, seems like everything is breaking down now.

Mahjong CLUB 90’s – this is a fun game, a power up is associated with each opponent and in later rounds you can pick which defeated opponents can be taken into the match with you.  I haven’t worked out yet which is the first one to go for.  I’m still kicking myself for accidentally causing some damage of my own while diagnosing the colour bleed issue.  It’s been a long time since I’ve done anything like that. 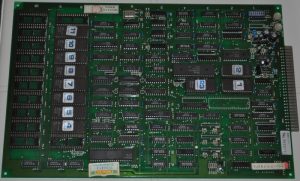 Nova 2001 – I got this one cheap because it has some kind of RAM fault, the difficulty is working out which RAM the error message refers to as it’s not very helpful and nothing looks obviously broken.  I might need to use MAME debug mode to at least work out which memory area is being checked to generate that error message.  Unfortunately it causes it to reset on a loop so I can’t get as far as test mode.. 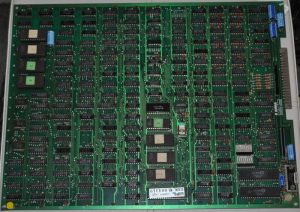 Devil Zone – very cool old shooter from Universal, it does work but the ribbon cable needs replacing and so do some capacitors which were damaged in transit.  I’ll make a video of it when up and running, as the sound is currently an emulated by MAME and it’s pretty good.

Sexy Boom – it was cheap and another game I need to archive in my adult games collection. they are a guilty pleasure of mine and something few people care to preserve. some of these games are now so rare and so unloved that it’s possible I have the last remaining examples.

Pirate Pacman – we can’t work out if this is an operator hack or a bootleg that from the factory, but essentially it’s a Pac man bootleg with pirate graphics.  The sound isn’t working, I’ll fix that as soon as I’ve made adapter for it. 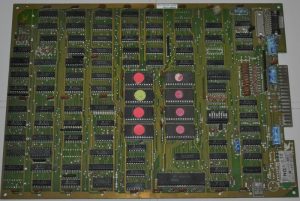 Rastan Saga – I’ve been looking for a good condition Japanese version of Rastan for a long time, one finally came up on eBay for a reasonable price.  While I was taking photos of my old one to put up for sale I found it was an undumped revision so good news all round. 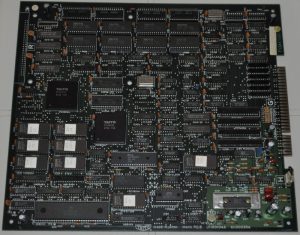 Mahjong Kyou Jidai – pretty cool mah-jongg game by Sanritsu, despite spartan audio it does have a certain character to it. 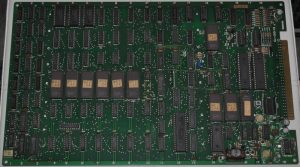 Sauro – I got this cheap on eBay because it was untested, there was actually nothing wrong with it aside from the code ROMs  being completely incorrect for the board and based on the bootleg set.  I suspect the reason for this is the original ROMs developed an internal short.  Someone has cut across every single 5 V rail and later soldered them back together again. 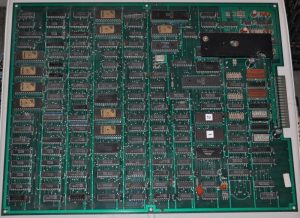 Buster Bros – another one I got in a batch of cheap broken boards, the only problem here was suicide.  Since the battery wasn’t leaking and simply flat, I actually desoldered it and recharged it before reprogramming the Kabuki chip.  I will be selling this one as my favourite Pang style game is actually Choky Choky. 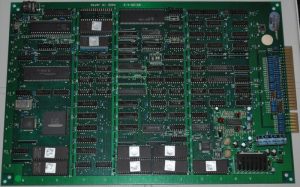 Super Marukin-Ban – another Capcom board with a suicide battery, I had to fight for it on Yahoo Japan and had hoped the battery would be the only problem.  It wasn’t.  The custom which draws the sprite layer was also faulty (turns out this is a common fault on Capcom games).  That’s the surface mounted quad which I’ve replaced with a donor part from a spare Black Dragon video board.  So I can also use this for testing donor pulls in future, I refitted it using a surface mount socket.  This was actually actually much easier than it sounds as there are small holes in the solder pads and reflowing can be done from underneath.  I’m very happy with how the work turned out and I’m very happy to have such a rare game. 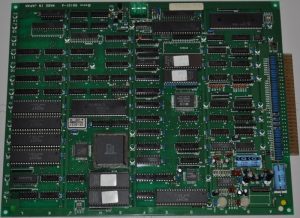 Fighting Golf – I developed a liking for this game after seeing it come up on BBH’s MAME roulette streams.  I recommend playing it in expert mode, it doesn’t actually make the game any harder but it does make it a little more involved.  There’s not actually any fighting in it. 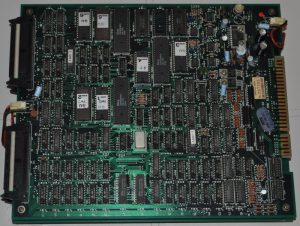