Well I managed to strike another two off the wanted list this time.  As you can see I’ve really been slowing down – a couple of reasons.  One – I have too many PCBs.  Two – the brake discs, pads and the tyres on my car all needed doing before winter kicked in.  Tyres were technically still legal but they weren’t feeling good at all.  Pro-tip if you have a sports saloon – Continental SportContact 6.  Unless you live somewhere where it still snows, you won’t even need winter tyres with those on.  Anyway, nobody cares about this – on to the vintage arcade electronics:

Mahjong Clinic – already have this one, this is a slightly later revision of the code and the only version which was in MAME up until now.  I just bought it because it came with artwork, the PCB is for sale now.  Honestly it was hard to pick which to keep. 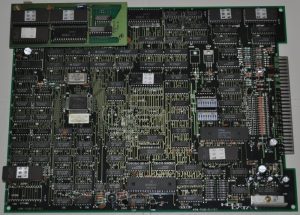 Lemon Angel – more slightly dodgy but somehow endearing hand drawn Home Data artwork in this Mahjong game.  You can buy power ups with lemons, of course.  Other than that it’s pretty uneventful, I just like the art. 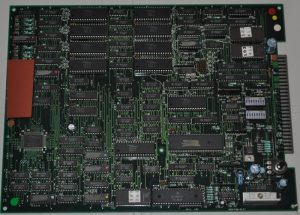 Private Teacher – now this is proper Home Data jank.  Digitised women, bad animation, and yet somehow it gets away with it by not taking itself very seriously, they picked a really charismatic woman to be your opponent.  It’s an undumped revision older than MAME, I’ll sort it out soon. 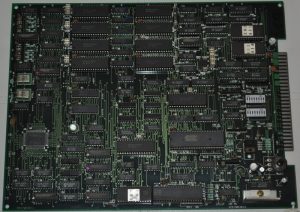 Hot Gimmick 4ever – last Mahjong one!  Came with an absolute stack of artwork, but also with screen interference and humming sound.  I’ve got a couple of Psikyo games on this hardware and that’s definitely not normal.  While poking around I noticed one of the chips handling the inputs (a transistor array) was burning hot to the touch.  It did turn out to be the culprit and replacing it fixed everything.  You can just see one of the chips near the edge connector is lighter than the ones to the sides.  Happy with how the repair came out, it was done by hand. 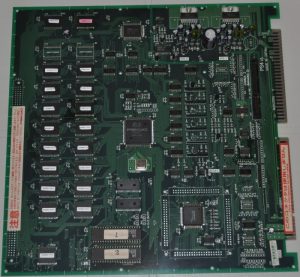 New Cross Pang – undumped sequel to Cross Pang.  Surprisingly it turned out to be more than just a basic name change which is common for Korean games, it has large pre-rendered characters animated on the left for example.  Annoyingly all those flash roms in the top left will need desoldering to dump this.  I hate SMT flash ROMs.  Hate them.  Hate. 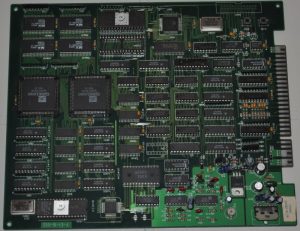 Robocop – Japanese version!  Another one I already own and bought for the artwork, it’s already up for sale.  I actually expected it to go quite quickly but it’s still here so I’ve been playing it on the supergun setup.  One of the all time classic games, a film license done right. 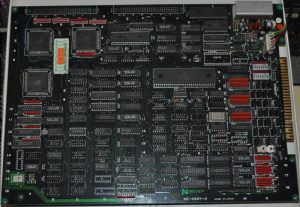 Dynasty Wars – I’ve been after this for a long, long, long time.  Unfortunately it’s hard to find except in Japan, and the Japanese version carries a ridiculous price premium.  Coolfox hooked me up with this fairly priced one from the US.  Of course they’ve messed with the difficulty making it much harder – less health items is the most obvious thing.  Luckily it’s very easy to burn a set of chips to make it run as Japanese.  Replace 18,19,30,31,35,36 with their positional equivalents from the Japanese set.  Do remember to keep the original chips safe. 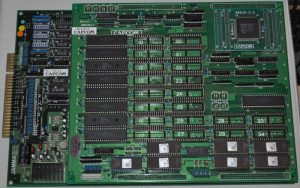 Quartet 2 – Top of the wanted hit list.  I’ve been told that in Japan, all Quartet 2s are like this.  Hand made labels on converted System 16A monster board sets, this one was a Passing Shot originally.  It’s possible Sega were converting them themselves, I’d love to know the truth.  The release arms on the right side of both clips top left are broken off, I think I have some on the MANY broken Tetris PCBs in the garage parts store.  Why did getting Quartet 2 instead of the original matter when they’re pretty much the same game?  2 player mode with character select is why.  Try this game out if you haven’t before, it’s cute and has great music. 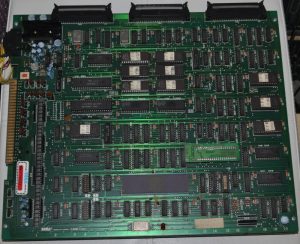