Bumper batch of Korean stuff this time, including a few surprises.  It’s worth noting some of these are the ones previously dumped for MAME, and I’ve not seen them elsewhere.

Rolling Crush – it’s a Puzz Loop clone by Semicom, but for some reason the flyer lacks their logo and the title screen attributes the game to a company called Trust.  In the credits at the end of the game it’s all Semicom staff though and names the company.  I wonder if this is one where they were scared of copyright claims, although it had never stopped them before… 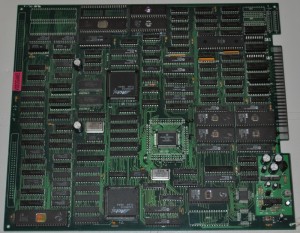 Puzzle Break – imagine if you made a breakout game where not only did bat position matter, but you could also angle it to affect the ball trajectory.  That’s exactly what this is and it does erase a common problem with most breakout games, the “I have one brick left and can’t get the angle” one.  Seller sold this as working despite all greens strobing once per frame.  Turned out to be a resistor array fitted backwards from the factory, how did nobody notice this fault before? 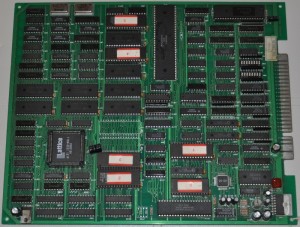 Magic Bubble – it’s Puzzle Bobble by Yun Sung.  It’s an OK enough clone, I already had the game as part of a multigame collection but it was the clean version – this is the ‘adult’ one.  This one had sprite issues due to a badly hacked resistor array, again from the factory but triggered by years of things being placed on top of it. 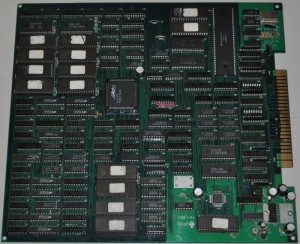 Mad Ball – another one I already had but that was the 1998 ‘swimsuit’ version, this is the 1997 fully adult one, it’s a Breakout clone with lots of power ups – not bad really but prone to “can’t hit the last brick” due to so many enemies respawning.  I’m not sure what trickery is going on with that extra PCB where the CPU socket is, the later version is just a straight Z80.  MAME doesn’t seem to have anything in there different between them – maybe a diagnosis board for engineers?  I see two pin connectors on there. 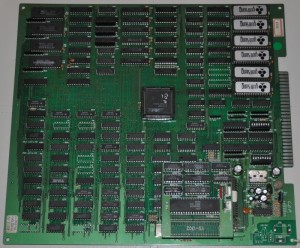 Gulf Storm – vertical shooter by Dooyong, not one of their best.  Filling collection holes really and it was cheap.  I do like the blue PCB though. 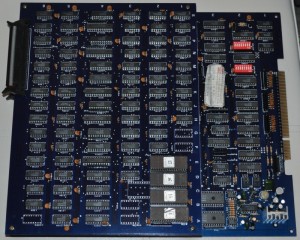 Gaia: The Last Choice Of Earth – so I was just browsing ebay and I spotted this one, a game only ever seen on a flyer which honestly some of us had written off as unreleased.  Interestingly it’s a horizontal game while the flyer shows vertical, looks like it was programmed to cater for both because it can vertically pan and enemies appear across the whole left/right area of the screen so presumably in vertical it would have horizontal panning.  It’s not switchable to vertical, either this is all that was released or there’s another type out there somewhere.  Terrible audio in this game, really low quality and muted in the music department, some graphics stolen from Sonic Wings.  I’m really happy to have found this one – it’ll be in the next MAME. 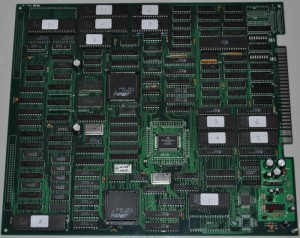 DragonNinja – found a Japanese one in the US.  Initially seemed like it had been abused a bit (there are a couple of repairs) but it’s cleaned up well!  Are you a bad enough dude to save president Ronnie? 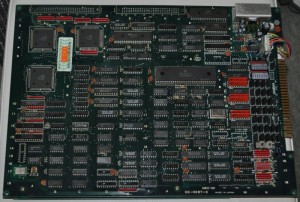 Change Air Blade – been curious about this one for a while.  There are two things you need to know about this game.  Firstly there’s a battery on the bottom which can and will leak – I got to this one early and just the battery pad is corroded.  It just stores book keeping stats so you can freely remove it and leave it off.  Secondly the game has horrendous slowdown during large bullet patterns which is not emulated in MAME due to a lack of chip documentation for the V60 CPU.  If anyone has a proper CPU datasheet/manual (not the programming ref guide) please get in touch with MAMEdev. 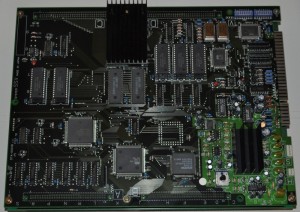 Castle Of Dracula – a Plotting clone by Yun Sung.  It’s fairly low quality, but I’m happy to have obtained this board because it’s the only example anyone has seen. 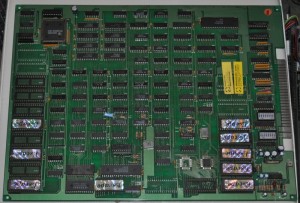