Another bunch of games with a couple of interesting items, some of which  were obtained in an untested job lot.  It’s been a while since I’ve had a chance to dig through  a box of unknowns, and I’ve missed it.  You never know quite what you’re going to find.

VS Janshi Brandnew Stars – this one is a very interesting take on the arcade Mahjong formula.  It tries to blend in a fighting game approach where you select three team members and have to win at least two out of the three rounds, or achieve a score-based outright victory.  There’s even a form of special attack which varies by character, the special meter has to be built by playing as quickly as possible.  This presents a completely different challenge to most titles where a key skill is using the timer effectively to think  about hand combinations. 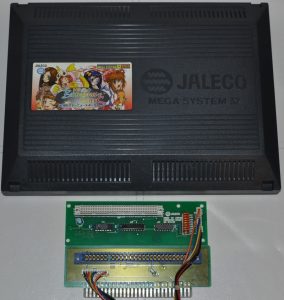 Toppy & Rappy – it’s Snow Brothers Clone Time!  Since this is made by Semicom it’s quite polished for a Korean game and I needed this one for my Semicom collection. 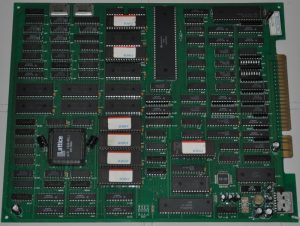 Mahjong Sailor Wars-R – I got lucky one morning and found a cheap Hyper Reaction 2 as a pair with this.  Unfortunately it’s the betting version and it turns out that a ROM swap is not possible.  I’m selling it as I already have the normal version. 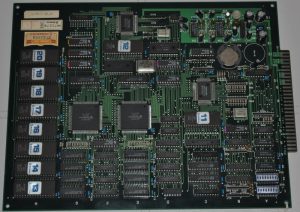 Super Real Mahjong P-II – one of the earlier titles in this infamous series.  These games are known for excessive cheating but I quite like this one despite it only featuring one opponent.  It was one of several untested and unknown games which I picked up recently.  It also finally answered the question of why there was a P-II written on the back of my supergun mahjong adapter, for some reason the edge connector is upside down. 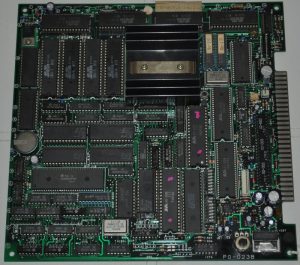 Royal King Jan-Oh 2 – a previously undumped game from Dyna and SNK which came in the untested batch.  Unfortunately it seems to have a little ROM corruption, and as yet I don’t really understand where that data is stored.  The small added board on top seems to halt the CPU unless 5v is applied, I’m wondering if it’s some kind of special hopper control or cabinet security device. 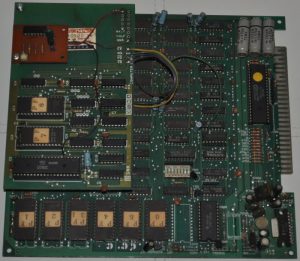 Quiz Sangokushi – I actually just bought this one for parts while I was trying to fix Super Marukin-Ban.  It had suicided of course which was easily resolved but it’s a quiz game completely in Japanese so despite the lovely presentation, this one will be sold. 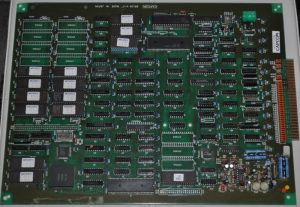 Real Mahjong HaiHai – an extremely common early mahjong game from Alba, and another one from the untested batch.  It was surprising how many games in that box came with their artwork, this one included.  It’s somewhat notable as a title but I won’t be keeping it. 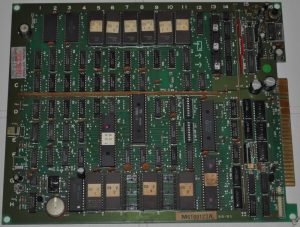 Quiz Mahjong Hayaku Yatteyo! – this one is going straight back up for sale, it’s really good game but I already have it and just bought this because it came with original artwork and was very cheap. 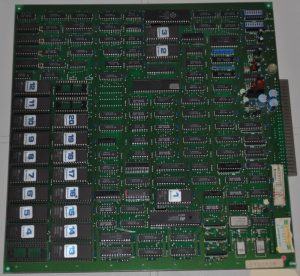 Mahjong Yuugi – I’m not really sure about this one. It came in the untested batch and initially I thought it was completely dead, but it was actually just dirt on the edge connector!  The game itself is decent enough and the hand drawn art style and animation are absolutely superb, but the audio is terrible.  I’d always thought it was an emulation problem but the music really is out of tune even on the PCB.  Bizzare. 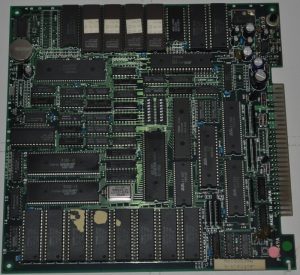 Mahjong Kisekae – very unusual and uncommon cart system from I’MAX.  It only partially works in MAME, not enough to be playable so I wanted to know what it was really like.  The answer is?  Actually very good and unlike in MAME the real thing can be switched between joystick or mahjong panel inputs.  I believe the panel inputs are on a combination of the 12 pin header and the Centronics connector because I can find two sets of six inputs on the Centronics and five voltage driver lines on the header which strongly suggests player one and player two control matrices.  I’ll post the pinout once I’ve proven this theory, but I’m waiting for a connector to arrive.  I’d like to find a second game for this system so I can mess around with it a little more. 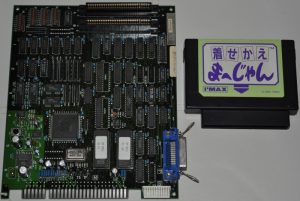 Mahjong Yarou – another game based on the old Royal Mahjong hardware, and another from the untested batch which turned out to be undumped.  I will probably be moving this one along once I’ve hopefully helped to complete the emulation. 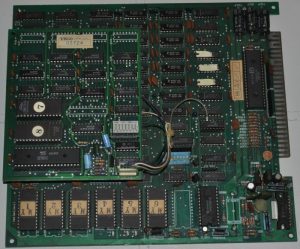 Mahjong Gakuensai 2 – set in a high school, this seems to have a story / novel element to it.  It’s quite nice but the male students are firmly the worst type of otaku stereotype. 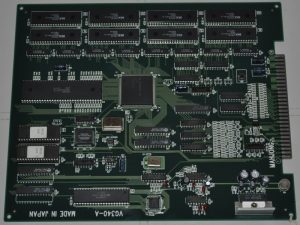 Mahjong Gakuen 2 – so this is the actual reason I bought seven unknown and untested PCBs.  It looks almost identical to the first game board but what gives it away is the battery.  Of course, the battery was completely dead but it’s simple to resurrect pre-CPS games these days.  It’s a good game and proved very difficult to find, but luckily the first game is incredibly common and just as good if you can’t find this. 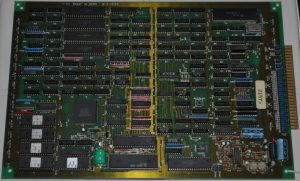 Mahjong Friday – it was incredibly cheap (less than $10) so I picked this one up to play around with for a bit.  I do like the kooky art style and it’s one of those rare things – a Dynax game which isn’t a gambling type. 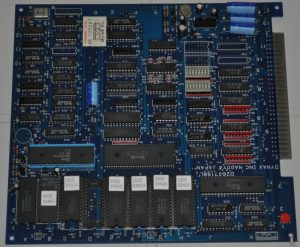 Taisen Idol-Mahjong Final Romance 2 – another game I already owned but bought because it came with lots of artwork.  I’ve finally assembled a complete set of all artwork for this game – in my opinion the best of the Final Romance series.  It will be put up for sale if anybody wants it. 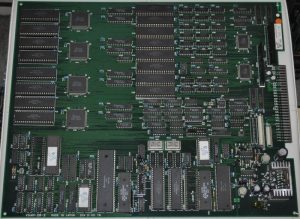 Mahjong Hyper Reaction 2 – I was looking around on Yahoo one morning when I saw this for a ridiculously good ‘buy it now’ price.  I’m not sure whether to keep it as a spare or find a good home for it, I’d rather this goes to an actual fan than putting it up for open sale. 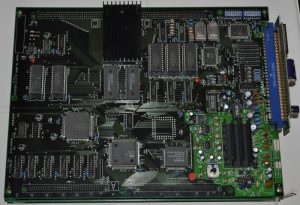 Mahjong Doukyuusei – remarkable only in its difficulty, but this was another $10 game and I have a soft spot for it since it’s one of the first ones I tried playing. 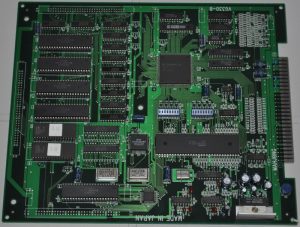 Gun Ball – finally!  This is something I’ve been trying to get hold of for years for various reasons (money or timing) I’ve never actually managed to get hold of one until now.  In case you’re not familiar with the game it’s an insane combination of shmup and pinball game, with excellent production qualities which are typical of late Data East titles.  When I saw this when I decided it was finally time to just go for it,  it wasn’t the cheapest price but it was far from the most expensive and I didn’t have to fight for it, fairly happy with that. 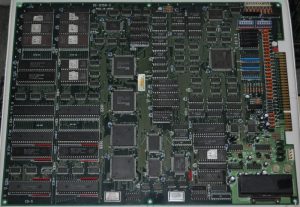 Bijokko Gakuen – I haven’t tried hooking it up to the panels yet, but like House Mannequin this is one of the rare Nichibutsu LCD panel games.  This is a later title which does also have the option of running on a standard cabinet without the special panels. 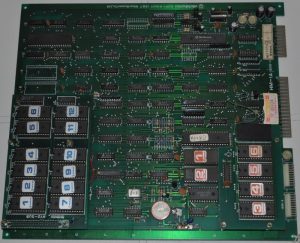 Cycle Warriors – not technically a new arrival, this is a game I picked up as part of a job lot from an operator about a decade ago.  When I initially tried it, it had a minor graphics glitch caused by a bent pin underneath the board, but while I continued to test it the sound died, and then the controls died, and then it stopped booting.  At one point I sent it to another repairer to look at and he was unable to fix it too.  I ended up putting it in a antistatic bag in a box in the garage and left it there for years.  The Sony I/O chips had looked suspect at the time so I’d ordered some, and a recent trade offering prompted me to finally get it out and see if changing those chips would help.  Sure enough the one on the right had been the problem all along.  Like most Tatsumi games this is incredibly rare and I’m very lucky to have a working one now. 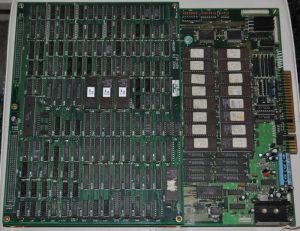