Quite a few things this time, a couple are really special and I’m quite pleased to have them now. 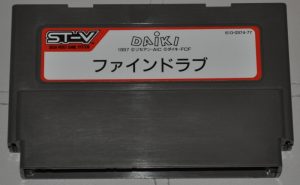 Virtual Mahjong – this is exactly what you think it is, strip mah-jongg with low quality polygons but unusually it’s a four player game.  I actually bought this one because it was the cheapest way of getting the mah-jongg panel adapter  needed for STV motherboards. 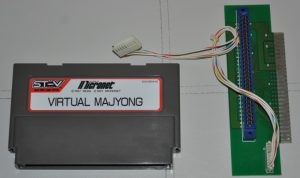 My Fair Lady – Virtual Mahjong II – this is the game I wanted the adapter for, it’s a similar concept to the above but a lot more polished.  Actually unlike the first game you can run this one in joystick mode but obviously it plays a lot better with a panel. 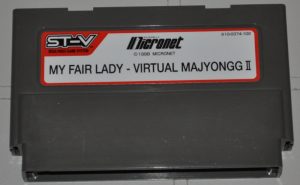 Mahjong Vanilla Syndrome – an indefensible purchase given the price, but I like this one so much I needed a backup…  Unless you understand Japanese it would be impossible to finish this game, as you have to interpret clues given to you after each round behind a series of doors.  I did find a Japanese guide (for the PC engine version) which seems more or less correct so I intend to translate it at some point and post it here. 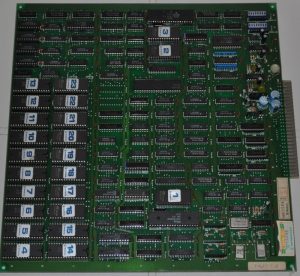 Super  Real Mahjong P7 – I like this entry in the series, the art and animation are truly excellent and the teacher is smoking hot.  Of course as is common for the later games in this series, it cheats like hell. 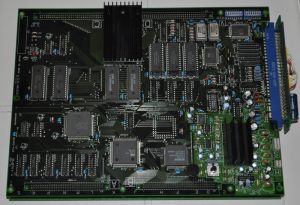 Super Real Mahjong PIV – this ROM board came bundled with P7 above, strange how they kept chopping and changing which hardware they were using because the two games between them are on different stand-alone boards.  The art style is also significantly different and more cartoonlike than the rest.  It’s also interesting that the JAMMA to mahjong adapters both of these games use are different to the ones used by Hyper Reaction. 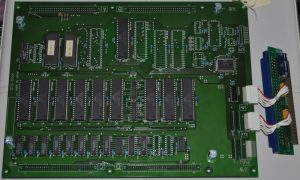 Sel Jan – yet another early mah-jongg game on Royal Mahjong based hardware.  It’s a fairly unremarkable game which was purchased to dump and will be in MAME soon.  Initially I had problems getting this one to run due to a partially charged battery. 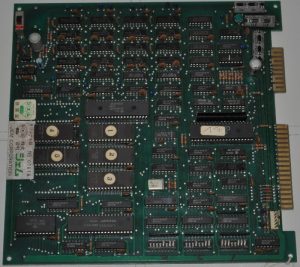 Ron II – another early mah-jongg game, I haven’t been able to play this one yet as I don’t know what the pinout is.  However it has been dumped and should be in the next release of MAME.  I had to replace all the capacitors on the PCB because they were nearly all leaking, and the underside shows rust on a majority of pins.  I don’t have very high hopes this one working when I’ve established what the pinout is. 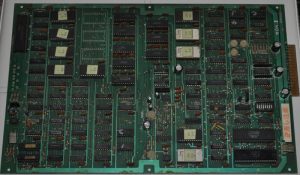 Mahjong Kyou Jidai – this one was very annoying, it was supposed to be a different game.  It came with the manual for the game advertised but this was the PCB and I have one already.  Perhaps somebody else will want it. 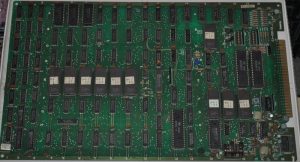 Jang Taku – yet another Royal Mahjong based game!  Also another undumped one which has been submitted to the MAME team.  There are a few interesting things about this one – firstly you can see the large amount of damage caused by a leaking battery,  in addition to corroding that whole ground plane the game didn’t work because the RAM socket next to it was completely destroyed.  Secondly it came with the artwork and manual and is an example of a third party kit which could be applied to Royal Mahjong boards.  The main board is an original Nichibutsu with correct serial stickers, and the top board was made by Dyna.  A lot of these derived hardware games are clones or even bootlegs but this is a genuine aftermarket upgrade kit. 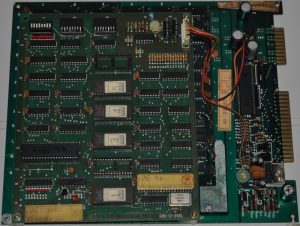 Fruits & Bunny – people who know me well enough will be aware by now that bunny girls are a favourite of mine.  This is a sort of poker gambling game where the cards have bunny girls on them.  It was advertised on eBay as an unknown board and I spotted the sticker in the bottom right, and F&B stamped on the CPU.  This particular example had been converted to Country Girl by Royal Denshi hence the extra sticker and a set of original ROMs with CG printed on them.  I’ve turned it back into Fruits & Bunny and used salvaged Nichibutsu ROM labels from dead games to make it look nice.  I kept the CG chips too. 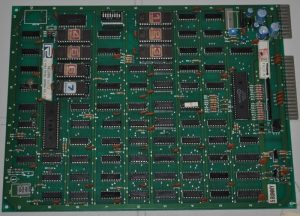 Taisen Idol-Mahjong Final Romance 2 – yes I bought this one again…  Finally I have a mint condition example which is what I was trying to do in the first place, the others are both for sale.  I’ll post some pictures up another time but I now have a complete kit for this game including a giant cardboard sign and the cable required to hook two cabinets up to the board (it’s a dual screen capable game.) 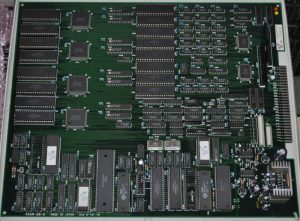 Mahjong High Rate DVD 15: Fuudol – after putting games out in PCB form, eventually Nichibutsu moved onto various optical storage systems so they could actually put live video in their games.  Very few people outside of Japan will ever have seen one of these working, and working examples are now quite rare because they require specific DVD drives which have failed in large numbers.  The drive from this one has a worn out laser and is currently in many pieces as I’ve possibly found a source of donor parts.  The control pot for DVD volume was also broken off despite the board being sold as working, and the DVD has a perfect ring of wear from some kind of lens crash incident.  I’ve polished most of it out to the point where my PC DVD drive was able to read the files reliably.  You can simply burn copies of these, only difficulty is the old drives can be fussy about what writable media they will read – more on this another time as I’m still investigating.  The game itself is the best one I’ve played in the series, in game animation and so on – see screens I posted to Twitter. 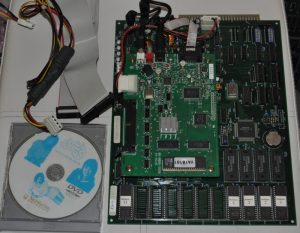 Mahjong High Rate DVD 7: Mania – marketed under the Sphinx label, this one actually has a slightly sinister atmosphere, conjured up by some unusually creepy music.  It also has one of the most epic flyers I have ever seen, featuring lots of women trying to look like schoolgirls playing Twister.  This system is fully working although the tray on the drive is prone to sticking due to a layer of dust protection material which is slightly sticky around the tray edge.  I’m thinking I might peel it off because it’s not needed in a home setting and just causes the drive eject motor to strain until you help it break the seal.  I will be either streaming or at the very least making YouTube videos of all of these games being played as I can’t find videos even in Japan, working setups are that rare.  As a result the software (DVD, ROMs and a security chip) are usually very cheap. 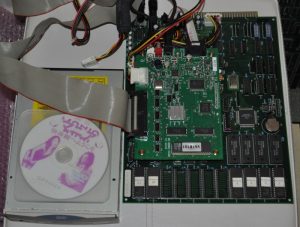 Mahjong High Rate DVD 4: Cosplay Tengoku 5 – another working DVD system!  I forgot to mention earlier this particular hardware is known as the “High Rate DVD” system and about 20 titles were released.  Further more advanced systems were released later, but none of them are fully emulated for various reasons.  The drive on this one (sold as working for lots of money) actually had significant problems with the discs skating and not reading reliably.  While I was trying to fix it, it took the opportunity to explode completely throwing parts of the drive clasp across the room.  It’s actually a design flaw from Pioneer, and I’ve managed to superglue the clasp back together and it’s now usable.  The only problem is it’s no longer sprung so for safety reasons it’s better to load the disc by removing the top cover.  It’s usable and reliable for now, but I need to find one of the many failed ones to raid for spares.  It’s usually the lasers that fail so finding a working motor & clasp unit shouldn’t be impossible. 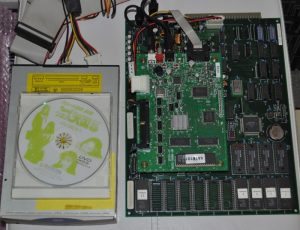 Disco Mahjong Otachidai no Okite – in the jong club,  we’re big fans of this one.  Being on the Sphinx label it’s lewder than most and has great music and graphics.  This one was very hard to find indeed, I don’t know if it used to be common back in the day as I wasn’t looking at the time. 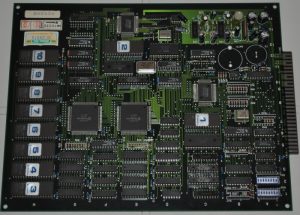 Mahjong Chinmoku No Hentai – despite the title this one is pretty tame for an arcade mah-jongg game, and it has an awesome military theme which sees you try to take over a map by fighting opponents.  The music and graphics are top-notch, but this game cheats harder than any mah-jongg game I have played except for betting titles.  It’s the same hardware as Lady Hunter and Club 90s, and as such had the same graphics fault so I didn’t have to pay too much for the PCB even though it’s probably one of the rarest titles.  I had a lot of help from Shou finding this one, it was elusive. 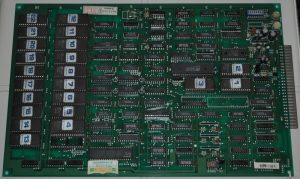 War Of Aero – I know some of you will be falling asleep looking at the large pile of mah-jongg games, so here is a shooter which is so rare that only a couple have been seen in the last 10 years or more.  It’s a very good Image Fight clone, I’m really not sure why it’s so rare.  I got lucky and saw this as a “buy it now”, even though it wasn’t cheap it probably would have sold for at least twice as much.  Initially it was fussy about voltage and would fail RAM test every first boot requiring a reset, but replacing the small reset chip and the main power filter capacitor made that problem go away.  Honestly I never expected to find this game, I gave up years ago.  You can pry it from my cold dead fingers at some point in the future. 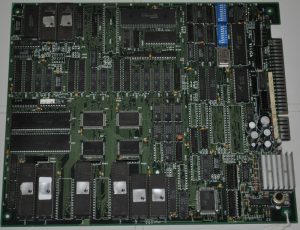