The Amiga has had multiple firmware versions over the years, known as “Kickstart”.  Unfortunately a lot of software that hits the hardware directly is affected by which version of Kickstart you’re using, leading to various hardware and software solutions.

The software ones (for example Relokick) do work, but if you have enough boot time toggles it can start getting unwieldy managing which things are resetting and why – for example booting into 68000 mode on your accelerator card, then booting Relokick to drop to Kickstart 1.3 which involves another reset.  Hardware options are definitely the way to go.

There are some quite complex ones which allow you to switch on reset with keyboard strokes, but I found one main problem with these – they’re always out of stock.  Additionally they only allow you to switch between two ROMs and have quite large physical footprints because for some reason people are really “purist” over Kickstart ROMs, copyright and so on meaning multiple chips or insane solutions like having to download original chips into onboard flash.

As many reading will know, I’m a member of The Dumping Union, so I don’t much care.  So I made a small quad switcher board which anyone can make without having to worry about stock availability.  It won’t work in all machines, if yours can cope with single 20 pin chips then you’ll be fine.  This is revision 1.1, the 1.0 included a mistake which affected the logical workings of the jumpers. 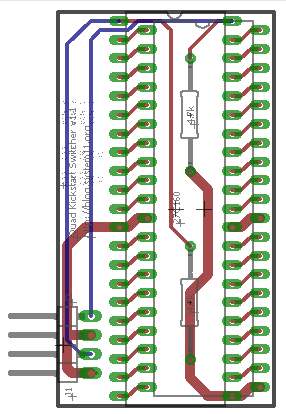 So what we have is a 27C160 (16mbit) chip split into four areas by the jumpers toggling high address lines on the chip, presented to the motherboard as a standard 27C400.  If you want to make life easier when you’re building this, solder the middle pin strip first, then the resistors, socket, other strip and header in that order.  It should look a bit like this: 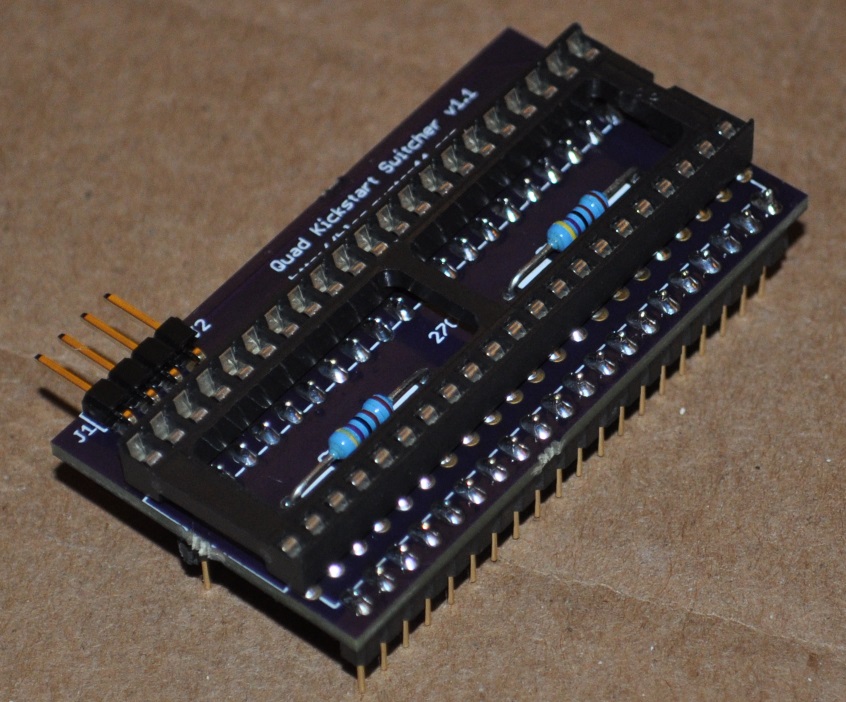 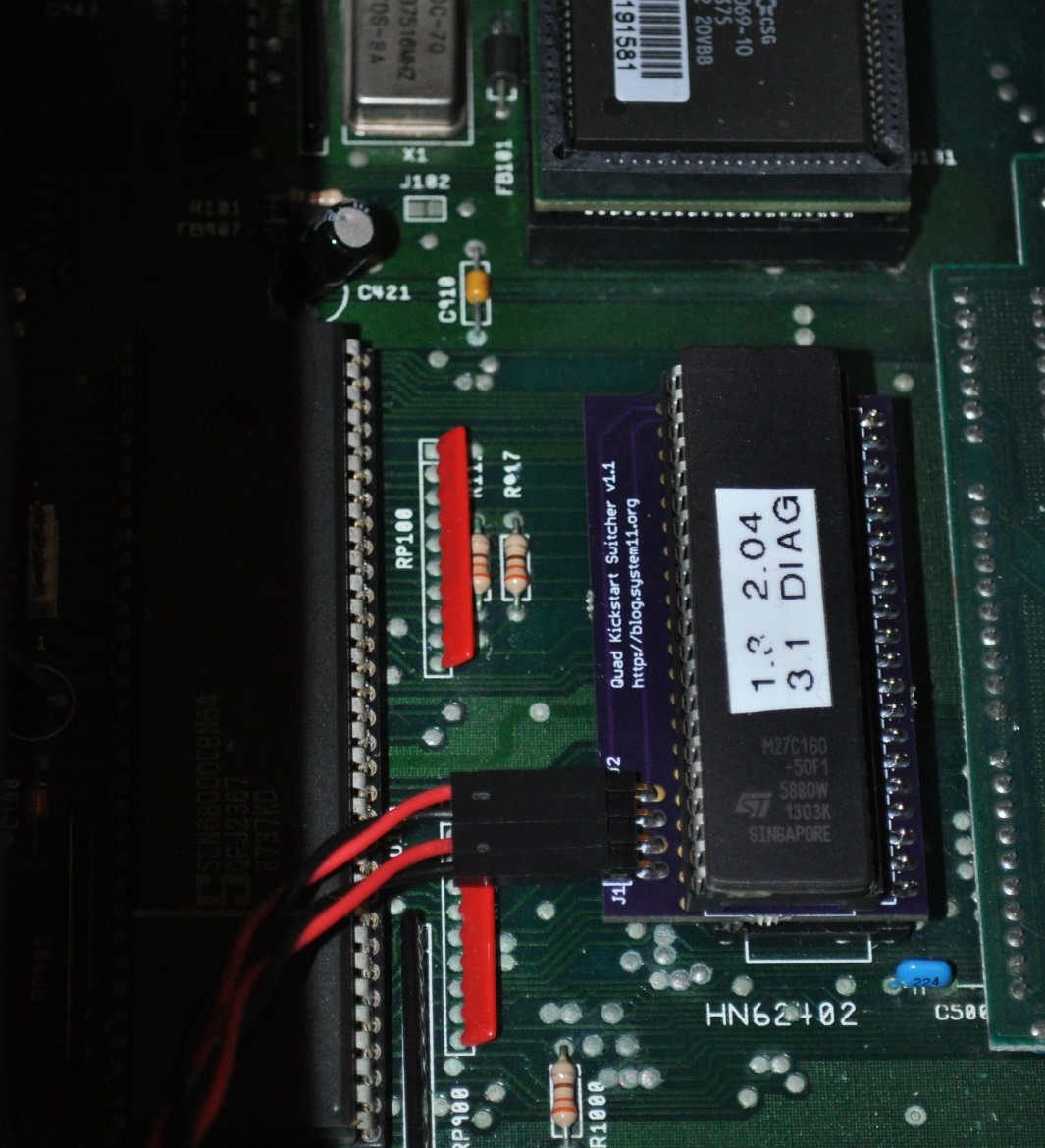 As with my drive switcher project, I suggest you get the boards made by OHS Park, here’s a handy ordering link:

However if you want to manufacture them yourself or make changes, here’s the Eagle CAD file:

To make the image for this chip just get your four chosen ROM images, double the size of any 2mbit images and copy the lower half into the upper half, and then compile them into a single 16mbit image.  There are loads of ways of doing this, I just used a Linux command line:

As you can see I chose 1.3, 2.0, 3.1 and the awesome Amiga Diagnostic ROM (http://www.diagrom.com), once you have that image you will need to byte swap it if you’re using images used by emulators, but not if you’re using genuine chip dumps.  As a sanity check when you load the file into your programmer software to burn the 27C160, look at the buffer – if you see readable headers instead of slightly scrambled ones, you’ll need to byte swap it.  In fact it’s probably best to check the individual ROMs you plan to use before joining them together, that will work just as well.

As for how to actually use it – well that’s up to you.  If you ground the second pin of J1 or J2 you’ll change which segment of the 27C160 is being accessed according to this table:

If you do this while the machine is running it will tend to crash horribly – but switching it during a reset seems to work, or by turning it off first.  You could attach 2 toggle switches to it, or do as I have and wire up a 2 pole 4 throw switch – if wired correctly this will let you choose any of the 4 possible combinations.  I used one of these: 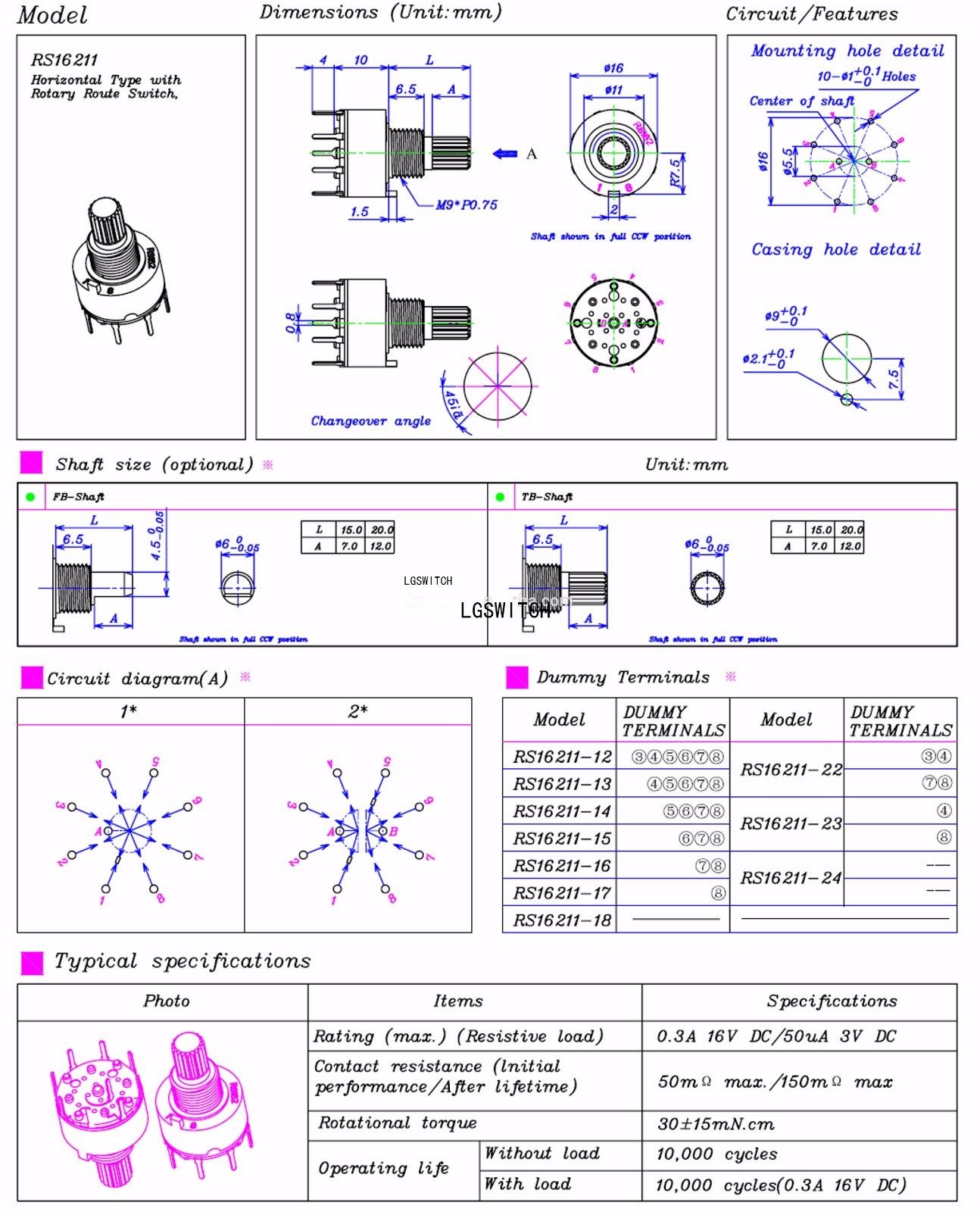 You may not make these to sell unless you are charging a minimal amount for assembly and parts.  Everything else is fine.