Well here it is, I’d been planning to make some of these for a long time and finally found the time and energy to do so.  TourVision carts are getting expensive.  I think part of this may be my fault for aggressively hunting them but I was finally prompted to get this project off the ground when a game I don’t own appeared for 900 euros.

If you’ve read my articles on the TourVision system you’ll know that the carts are just Hu Cards sealed in epoxy in a plastic box, and a slightly extended connector with 8 pins for the game ID.  The game ID determines what the system will do with the game when you press start, how many players it supports and so on.

I actually picked up an adapter a while back which came with a motherboard and some games, someone had hollowed out a cart and put a piece of a cut up PC Engine inside, using a connector soldered to the edge connector.  It kind of works but it’s very hand made and not something you’d want to replicate.

What I’ve created today is this: 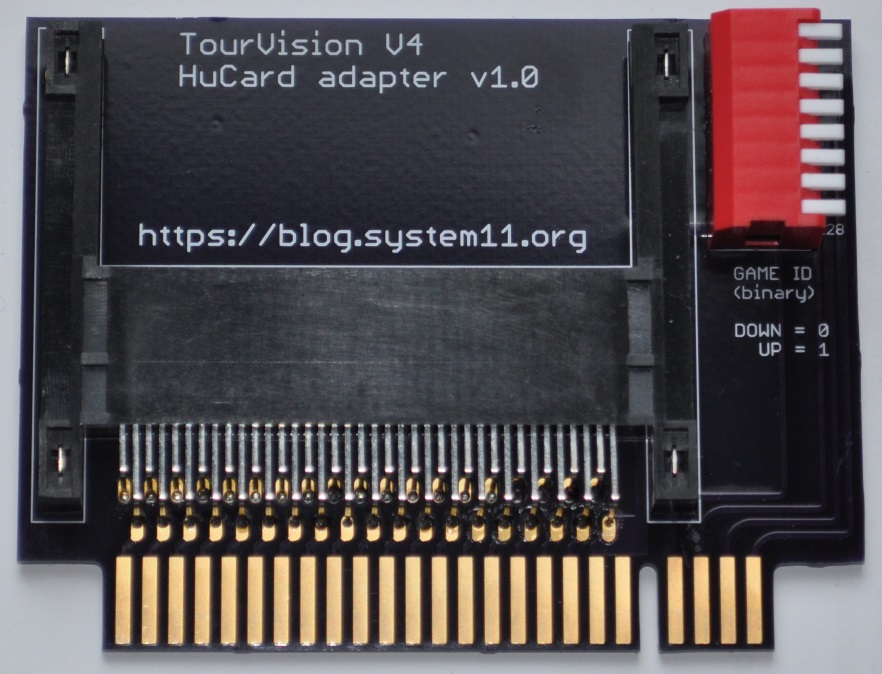 You just insert the Hu Card in the adapter, set the dip switch for the correct game ID, put the adapter in the TourVision and you have something that works identically to the original cart.  The dip switch is a representation of an 8 bit number (0 to 255), and because people don’t generally carry binary around in their heads I added a little note and some labels near the switch.  Sadly the switch setting needs to be the opposite of the “ON” printed on the switch casing itself, but reversing that would have overcomplicated things and I specifically wanted to use this type of switch as they’re easy to actuate and last a long time. 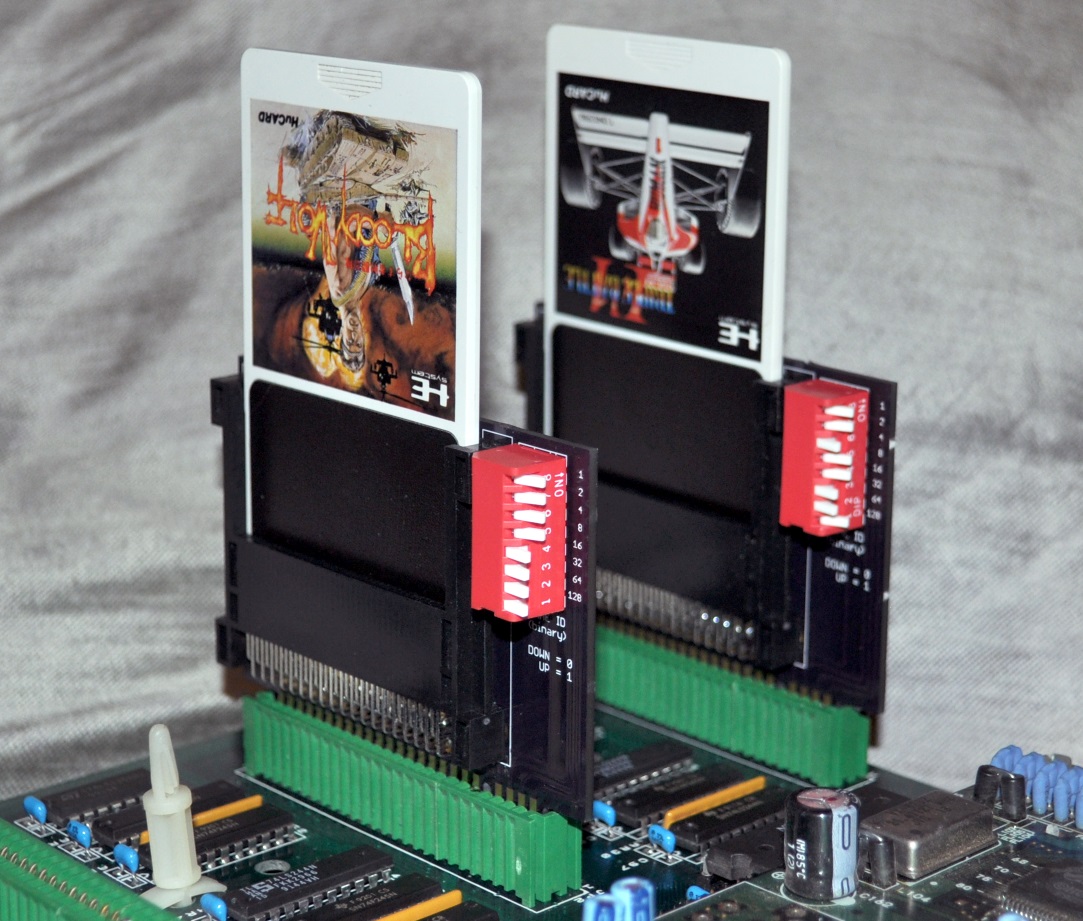 The game ID for F1 Triple Battle is 100 – here’s the dip switch set accordingly to 01100100.  A quick way of working it out is going from left to right adding the largest numbers required to reach the ID you want, in this case 64 + 32 + 4 = 100.  If you get this wrong it will probably stop you starting the game correctly but it won’t damage anything. 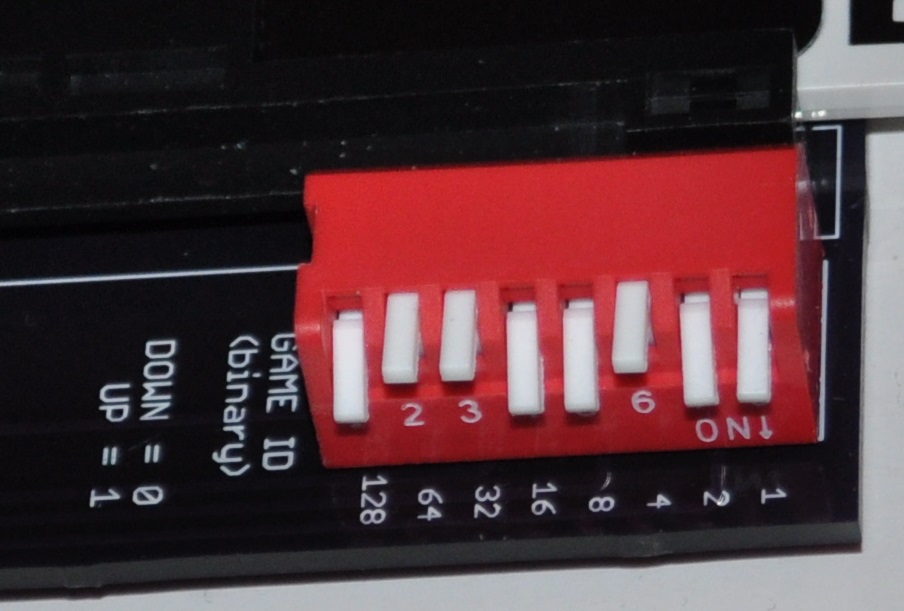 Of course this also means we can play around a bit – and this bring me on to BIOS rev “6.x”.  This is my own modified version, it may evolve over time but currently it contains a fix for the Afterburner config, a brand new game ID 240 for Bloody Wolf which was not released for the TourVision, and a special ID 255.  ID 255 can be used with any game at all, it disables all the lockouts and gives the player full control of the menus etc after start is pressed.  You’ll still have to keep the system topped up with purchased time but if all you want to to is run a game and not have the normal startup options the system forces on you, just set all the switches to the up position.  Here’s F1 Triple Battle and Bloody Wolf running on adapters (BW timing not perfect yet, still tuning):

You can use the adapter with any standard TourVision BIOS, but upgrading to 6.x will give you the derestricted ID 255, without it you need to set the correct game ID to match the card and a BIOS new enough to support that game.  Here is the current full list of known game IDs:

There are also a couple of suspected IDs I’ve discovered to work but have no proof for accuracy of.  The Kung Fu / China Warrior works with ID 11, and Parasol Stars works with ID 94.

The design was quite easy aside from creating the CAD objects for the HuCard connector and the edge connector – fortunately I got them right first time.  The HuCard mounting points could be more accurate but the way they are now makes it very hard to fit the connector badly as they click into place, so I’ll probably leave it like this. 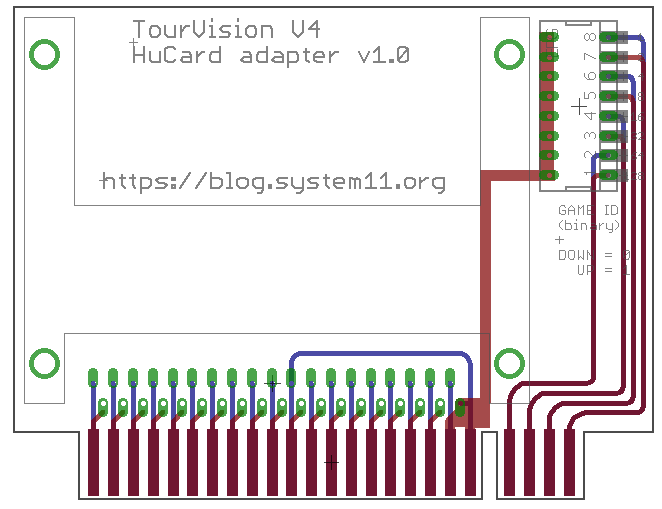 I made a small number of these to offset the cost of producing prototypes and so on, these have now been sold and thanks to anyone who bought one.  I will not be making any more as like my other projects, it’s open source.

You can order the boards from OHS Park already at the below link:

If you want to make your own boards using your own equipment or via a different provider, the Eagle files are here (including the tourvision lbr file):

The 6.x BIOS is available here:

Please let me know if there are any games unsupported by the system that you’d like me to add to future 6.x updates.  Of course you can just use ID 255 to essentially disable the start automation but for example I found it quite fun to have the system starting Bloody Wolf for me.