Living as I do in the UK, consoles weren’t really the big thing and everyone had home computers – the Spectrum, C64, and later the Atari and Amiga.  On the ZX Spectrum and the Amiga when I graduated to it, I used to absolutely love an arcade conversion called LED Storm (also known as Mad Gear in the arcades).  I played it for hours, it’s a vertically scrolling ‘race against the clock’ type deal in futuristic cities and wastelands.    It looked a bit like this: 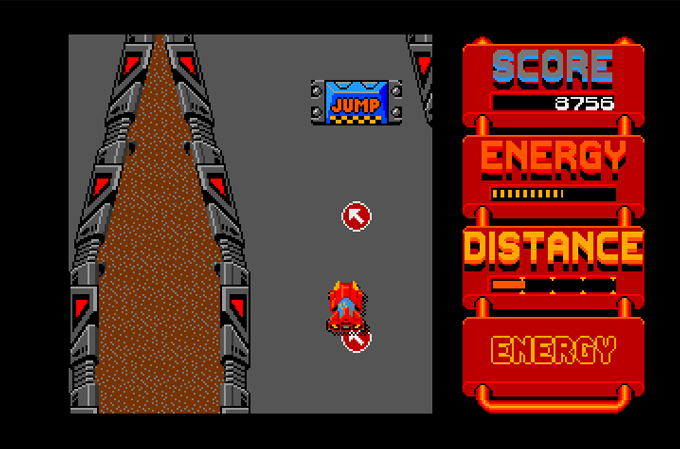 One of the things I always remembered about it was the amazing music, on the ZX Spectrum 128K and the Amiga it was composed by Tim Follin, one of the best tunes (although short) was during the map screen which showed the overall route and a bit of text introducing the computer, Mac:

The music in the game generally really dug its hooks into me and as a result I played the game for hours and hours and hour and … eventually I moved on to other things.  Fast forward many years and I’d got into arcade collecting, the first thing I did was start getting hold of anything I’d enjoyed before – games like Robocop, Black Tiger, and LED Storm.

It had been years, LED Storm was a different beast entirely – the music was different, it seemed to play very differently (part of this was the corrected screen aspect), you could choose cars at the start (boring ones)- and Mac along with his route map was gone.  That made me sad, I liked Mac.  I wrote it off as just one of those things that so often happened back when home computers got ports – game differences were common as they were rarely provided with the original code or assets.

Recently on a mailing list I’m part of, Shou started asking if anyone had a lead on a Rally 2011 LED Storm PCB, I’d never actually noticed before but it’s been in MAME for a while with broken graphics due to difficulties dumping the strange surface mount ROMs.  All the Mad Gear and working LED Storm dumps came from boards with an extra ROM riser fitted with standard chips so they were no problem.  I had a quick look around and found a dirty looking faulty PCB on ebay with a low BIN and ‘rally 2011 led storm’ written in pen on a sticker.  Since at this point we hadn’t really contemplated it too much, nobody seemed to think it was the right game but spotting the LSE labels I knew it had to be an undumped revision of some kind anyway, so bought it for the greater good.  It arrived today: 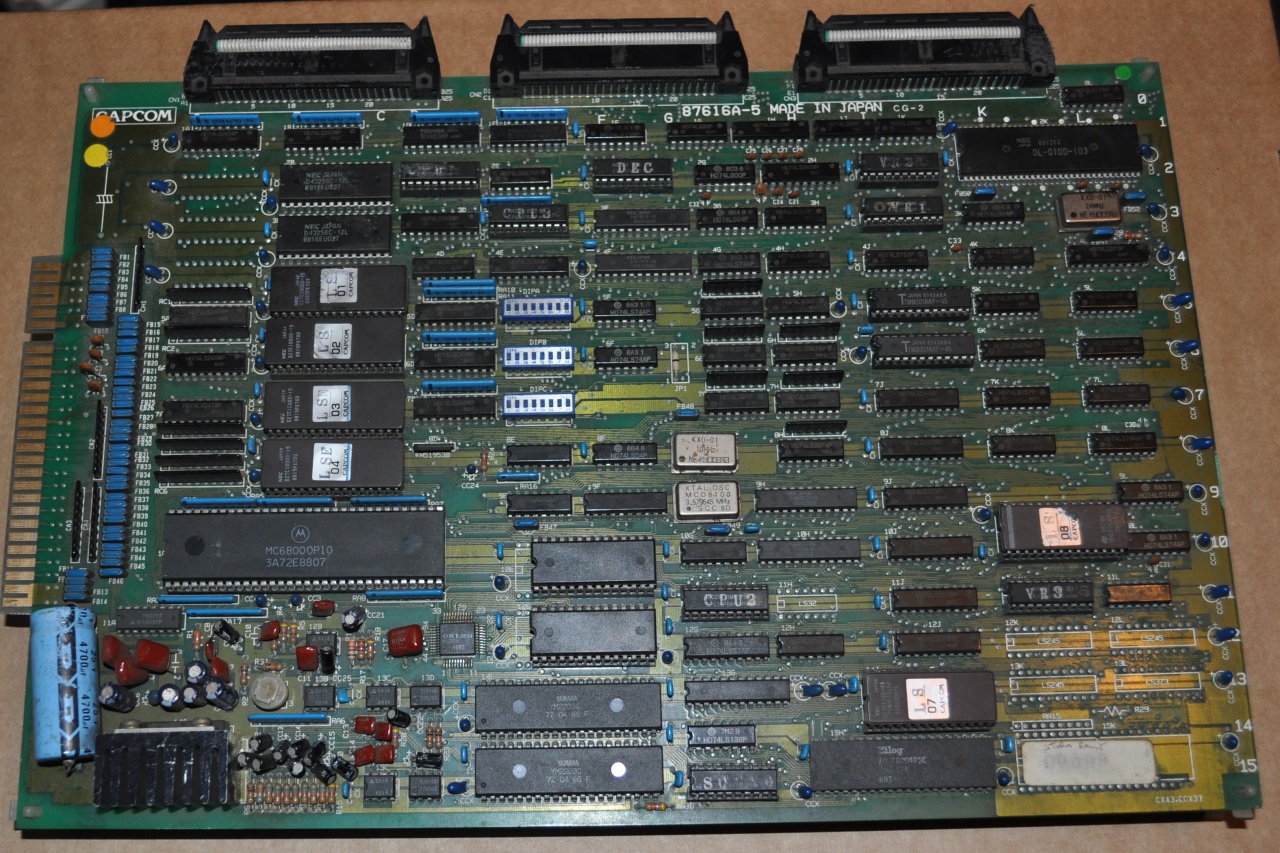 Sure enough as promised, it was .. quite faulty.  And it has some minor corrosion that I should be able to easily remove (a few sockets will need replacing too).  You can still just make out the serial number – 00009.  It needed a lot of juice to run, more than it should certainly.  It was failing RAM tests and when it finally booted the screen was strobing horrible shades of yellow.  It was quite painful to look at to be honest.  However – it also turned out to actually be a Rally 2011 LED Storm.  Reseating the ribbon cables got it to boot, and after some testing against my LED Storm (newer rev) board I narrowed the fault location down a bit and had to replace both of the colour RAM, they’re the couple of Toshiba ones (now) in sockets.  Bingo – fixed! 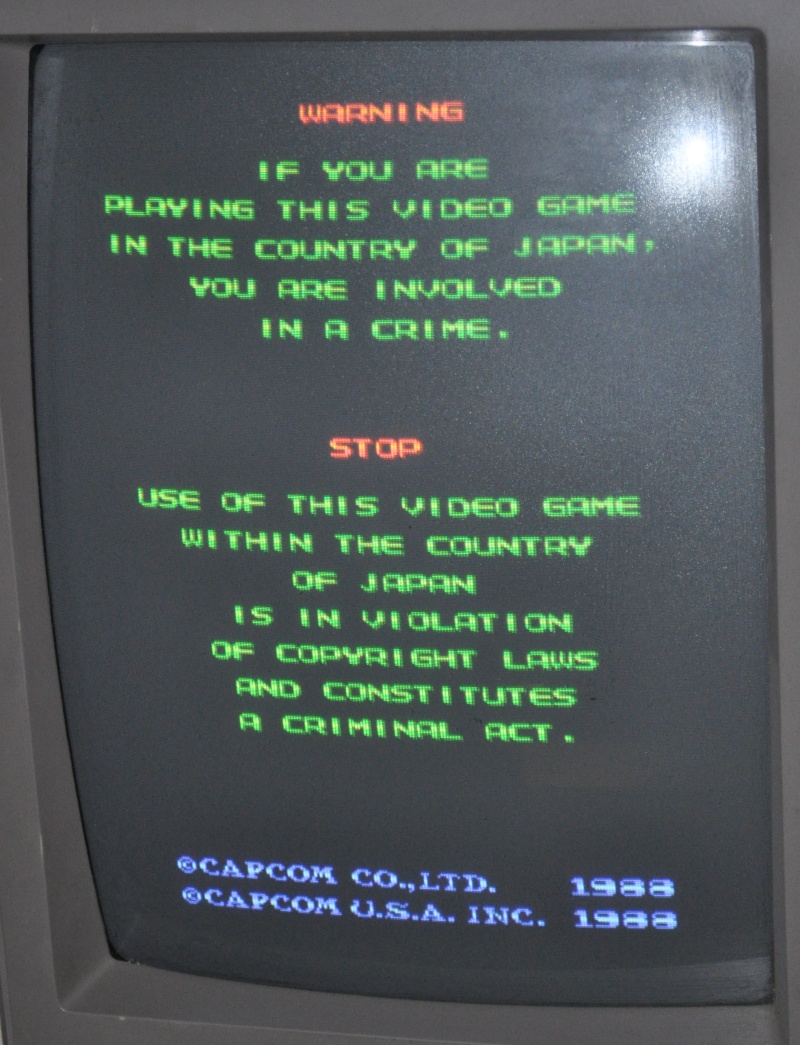 The story goes that the game tested quite poorly in arcades, so Capcom went away and reworked it a bit, and what people have mostly seen in the arcades and MAME was the LED Storm / Mad Gear version.  As we’d later discussed as being likely on the mailing list, the home computer versions must have been based on this revision of the game – so finding one in Europe was not that unusual really.  It’s possible the programmers were given access to a test machine, but I’ve been unable to contact them to fill in the blanks.

The differences are actually … huge.  The intro is different and doesn’t jump straight into attract gameplay, you don’t get to pick from 3 ugly cars and instead have the lovely futuristic one I remembered.  Mac is there with his map, and HE TALKS!  The car jump feature is fast like I remembered it instead of floating in the air for all eternity which makes the game stupidly easy even though all the jump pads are missing, the maps are closer to how I remember, and something which wasn’t in the port – you can transform into some kind of bike by pressing button 2. 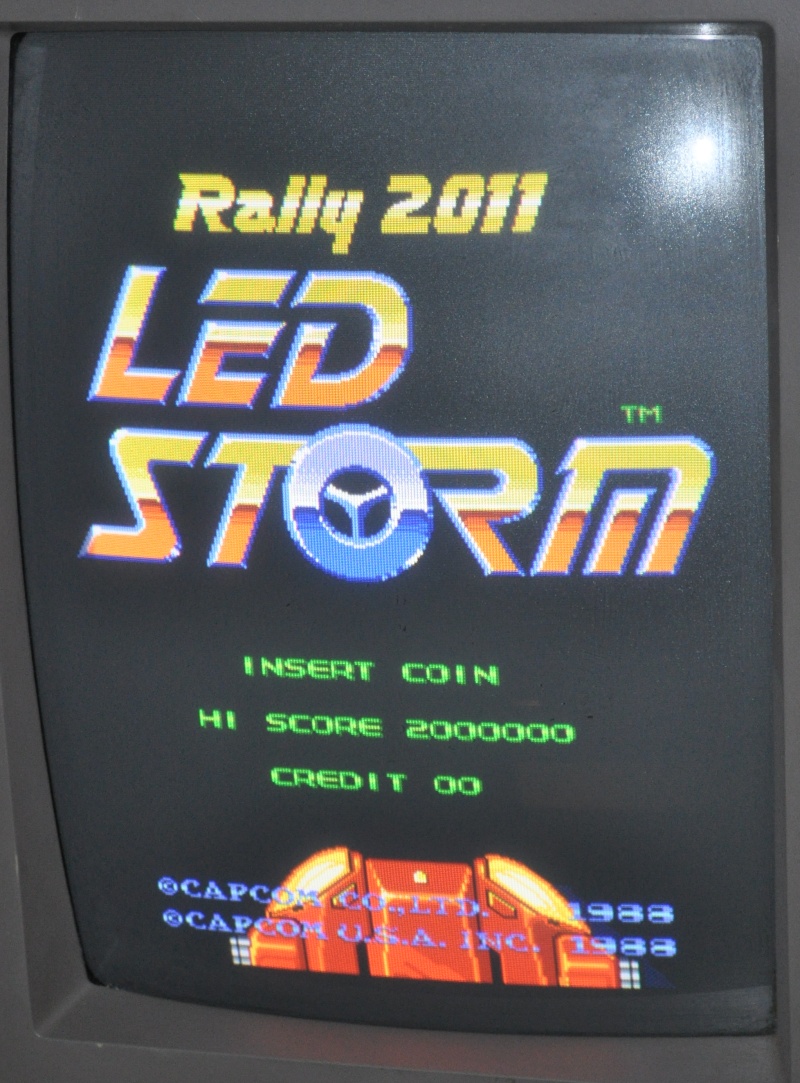 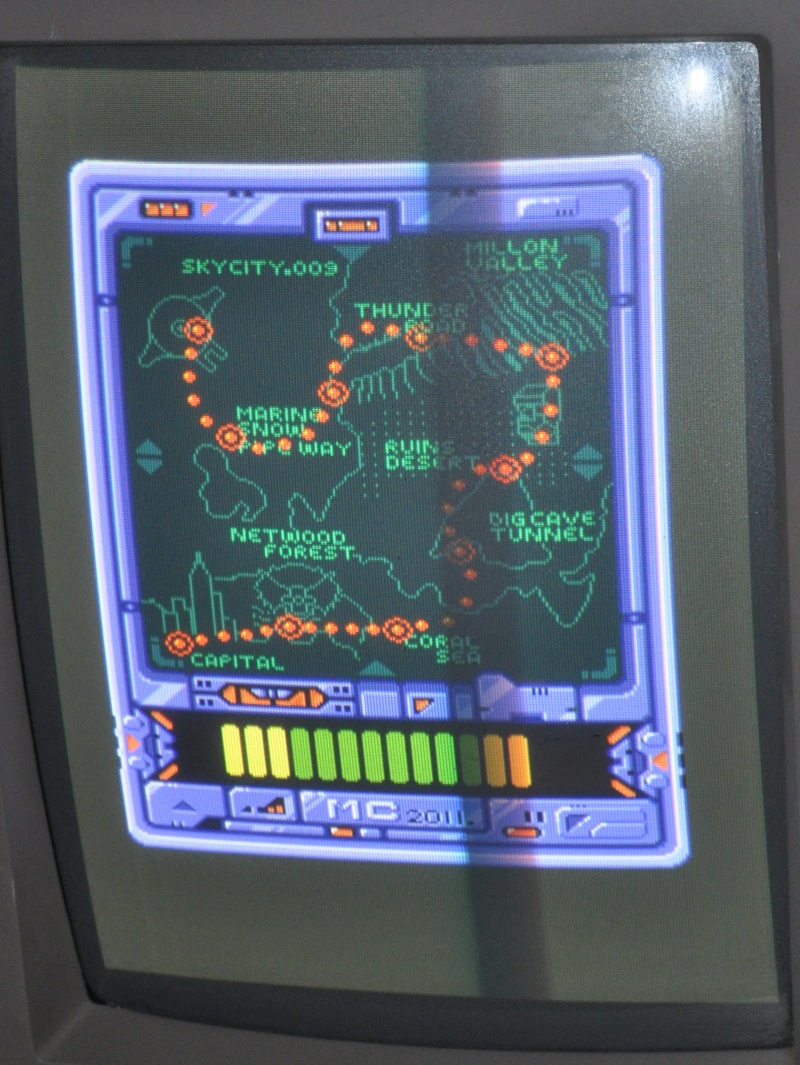 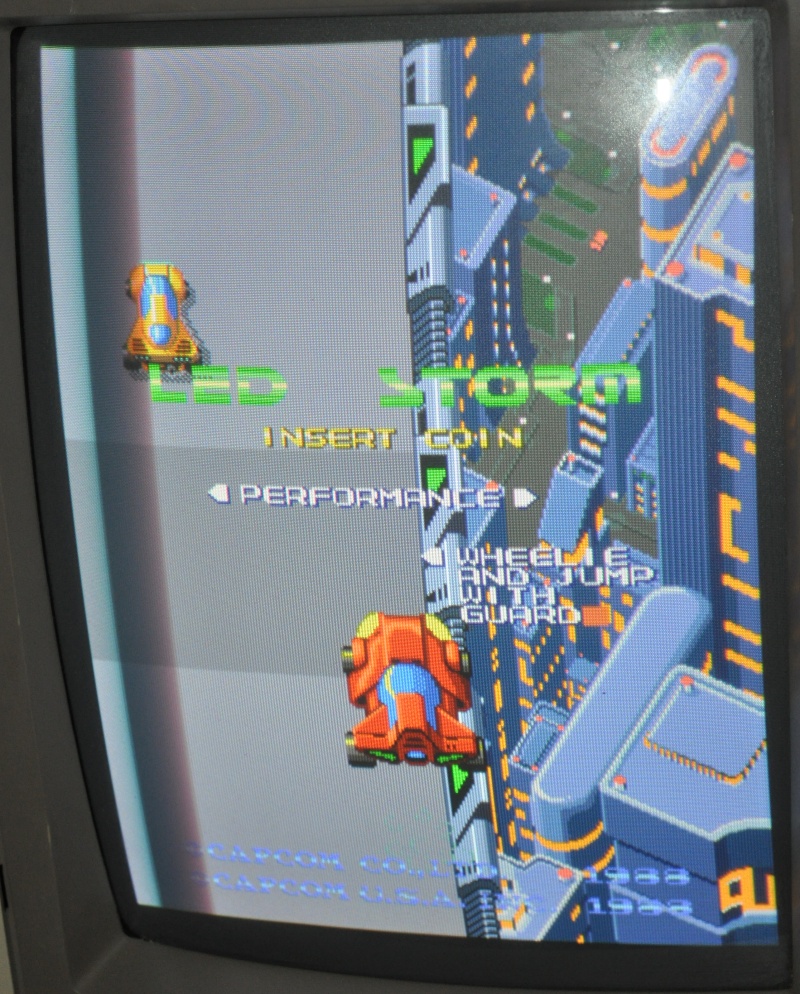 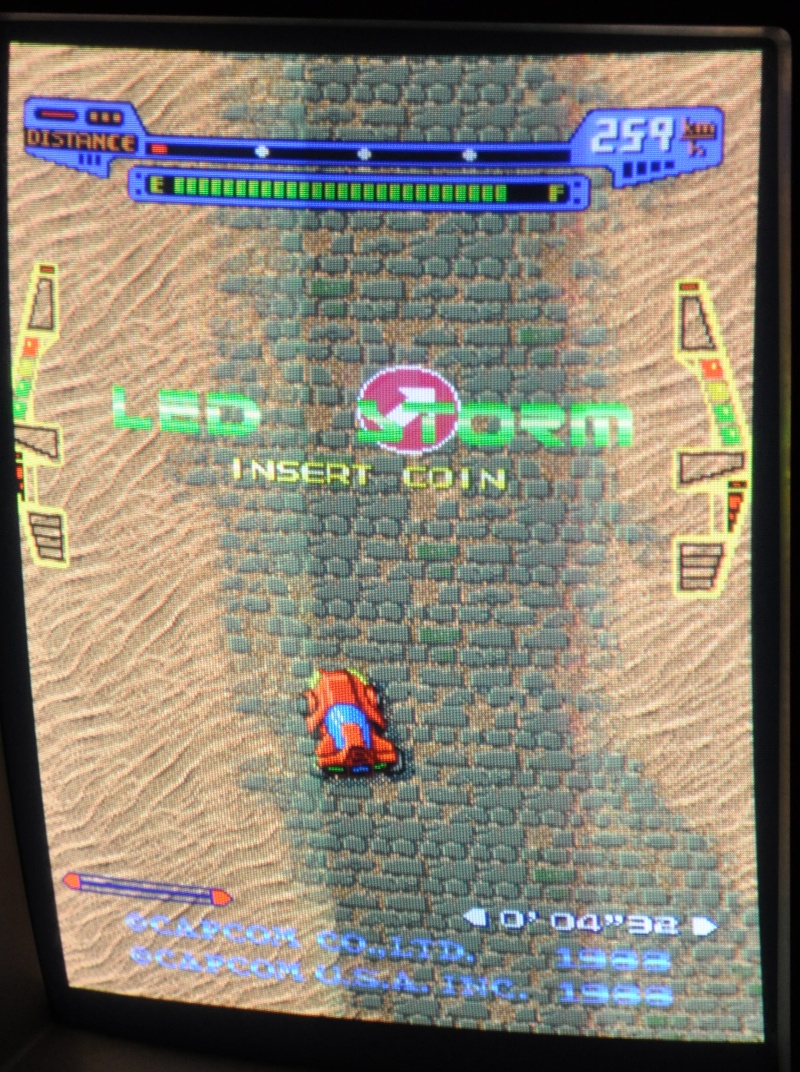 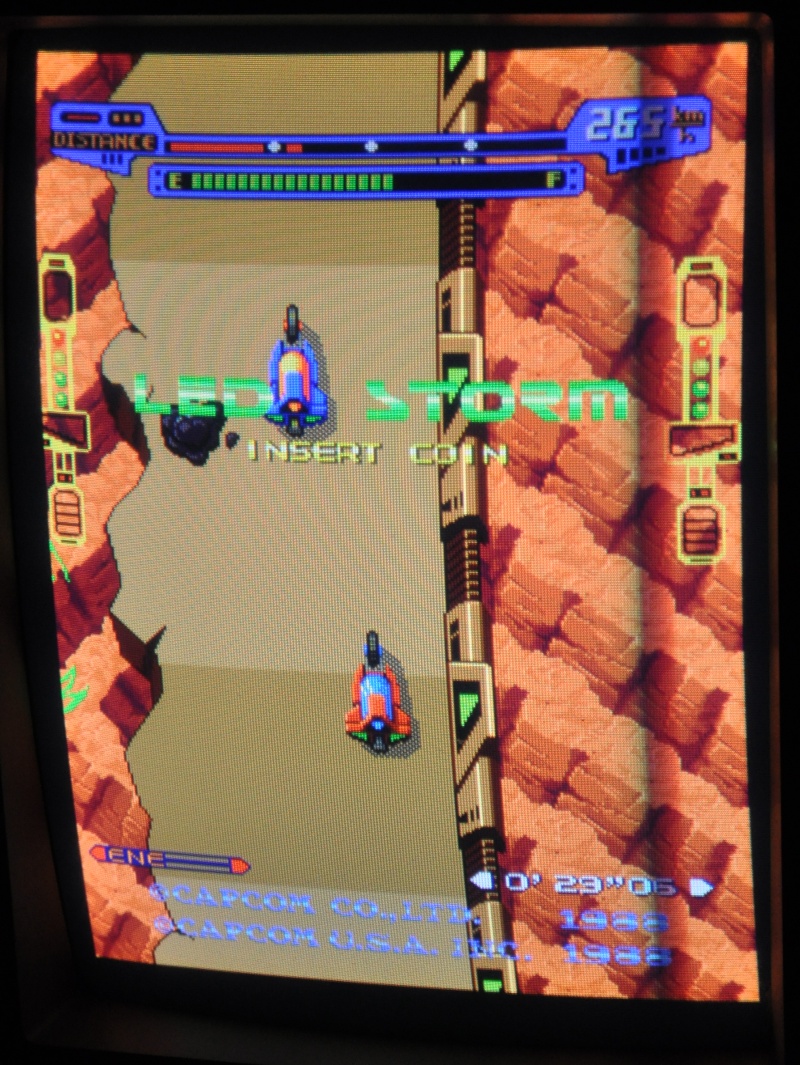 So now I finally have a PCB which is like the game I remembered and I have a big grin, even if the music still isn’t by Tim Follin.  The Guru managed to dump the troublesome graphics ROMs and sold me the PCB, so now I have two location test boards and you can enjoy this in MAME now.

However – the story doesn’t end there…  For many years a photo had been floating around on the internet of a LED Storm PCB with “RETURN TO JAPAN AFTER THE SHOW” written on it.  Unusually it had two ribbon cables instead of the three on other types.  This was assumed lost but while I was browsing Youtube for PCB footage to compare against, I found a video of a version where the car was able to shoot.  After a bit of detective work I found that it was uploaded by a member of the Neo Geo forums, and he still had the PCB.  It took a year or two but I was able to purchase this eventually – and it turned out to be quite a familiar PCB: 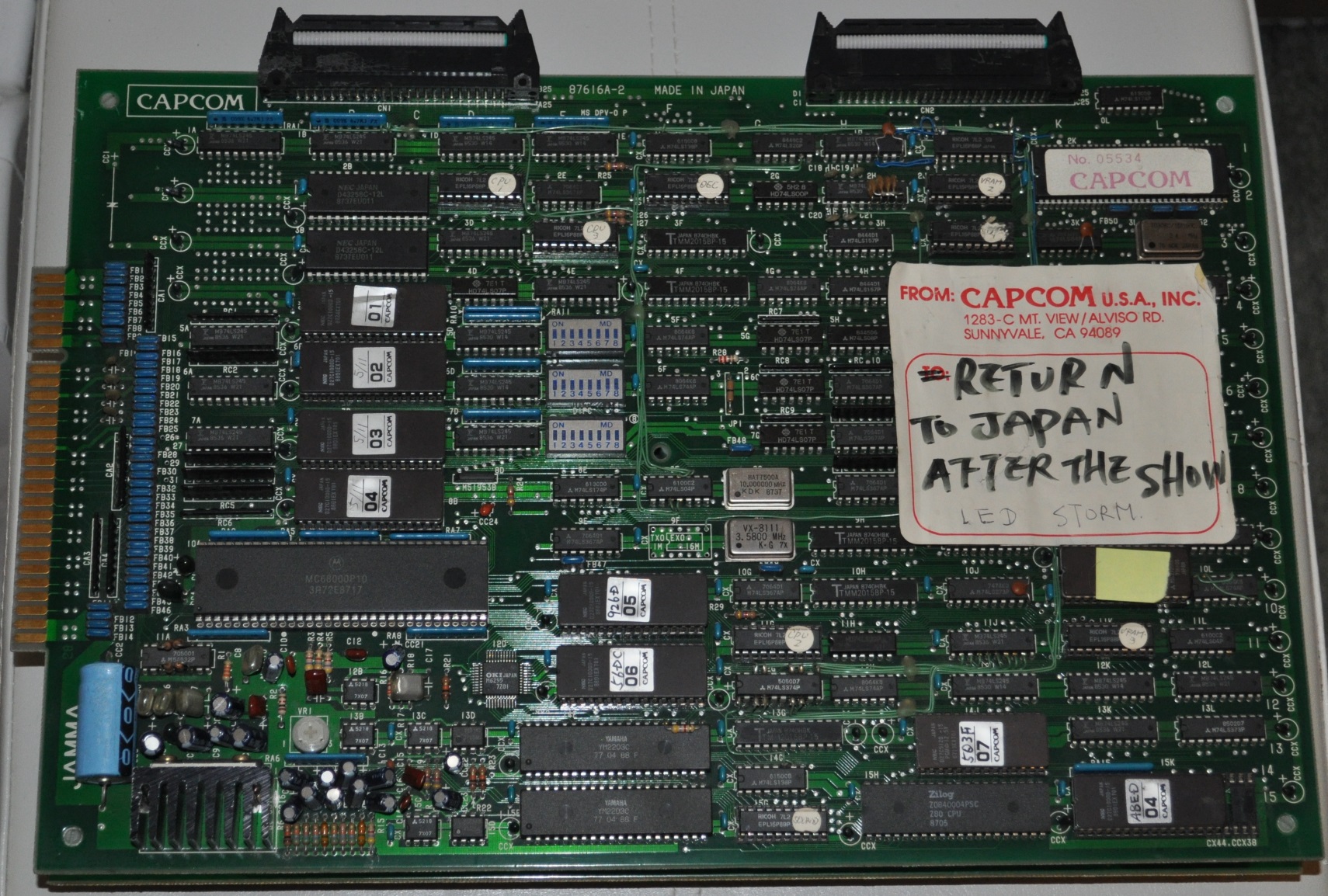 It’s a prototype.  Along with some extra and possibly unused hardware, none of the PALs are stamped and there’s a maze of trace wire connected to floating chip legs.  The general board layout is similar, and instead of the four surface mount ROMs there are four risers with EPROMs on them rather than none on the location test and two on the final version.  Here are all three side by side:

I’m very happy to have obtained these and made this prototype version available – managing to get hold of multiple very different versions of the game shows an insight into how ideas can end up being implemented and discarded.  Even the hardware changes are interesting – Capcom must have believed LED Storm 2011 was going to be the finished game as all the graphic ROMs are surface mount instead of the risers seen in development, but they had to go back to risers after the game was redeveloped.

I think we can close the book on this one now.  I’ve actually revised my opinion of the arcade version music since writing the first version of this article and adjusted it accordingly.